OPINION: NFL players risk their bodies and their lives on every single play. Why are we watching this?

Touré   |
Buffalo Bills safety Damar Hamlin (3) warms up prior to the game against the Buffalo Bills and the Cincinnati Bengals on January 2, 2023, at Paycor Stadium in Cincinnati, OH. (Photo by Ian Johnson/Icon Sportswire via Getty Images)

I love football, but nights like Monday night make me wonder why. Buffalo Bills safety Damar Hamlin made a routine tackle and suddenly found himself fighting for his life after suffering a cardiac arrest. There wasn’t a notable collision; the play wouldn’t have made it into a package of highlights from the game, but then he crumbled to the field and could not get up. I got scared, and so did everyone watching.

The players around him began to cry, and seeing NFL players cry is a shock to the system. Football is the king of American sports precisely because of the machismo and the violence, but we expect — we assume — that these huge, tough guys will absorb someone crashing into them, jump up and walk off like nothing happened. Like most fans, I love the spectacular crashes, but when a football game ends with someone struggling to breathe, getting CPR and being carted off by an ambulance, as a fan, you have to step back and say, why am I watching this? Football is an orgy of violence, but it only works when people get up and walk back to the sideline. If they’re battling death because of a game, what are we doing? 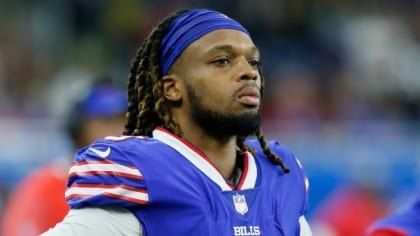 Football is a metaphor for war — there are two armies banging into each other, in an attempt to capture real estate —but it’s not just a metaphor. On every play, men are risking their bodies and their lives. I recently saw a clip of superstar quarterback Patrick Mahomes talking about how when he’s on the field running with the ball, he’s running scared. Years ago in some airport somewhere, I met the legendary running back Eddie George. I was sitting at a bar waiting for a delayed flight when he sat beside me, and we started talking. I’ll never forget one thing he told me — during games, the actual amount of time he spent playing football was about five minutes, but physically it’s the hardest five minutes you could imagine. Of course, there are truly scary stories.

I grew up in Boston hearing about the New England Patriots star wide receiver Darryl Stingley, a name that rang out as a symbol of what could happen if you played football. In 1978, during a preseason game, Stingley was hit as he reached for the ball. His head collided with a defensive player’s shoulder, badly damaging his spine. The play left him a quadriplegic — paralyzed for life.

Years later, we have rules meant to protect players and stronger helmets, but once you step on the field, you’re vulnerable. And even if we don’t see the damage happen in a dramatic collision, these players are deteriorating before our eyes play after play. In every game and every practice, they’re crashing into each other over and over, which means their brains are crashing into their skulls, and over time that leads to chronic traumatic encephalopathy (CTE), a brain disease that causes depression and rage. Just 10 years ago, one of my favorite players, defensive star Junior Seau shot himself in the chest at the age of 43 because of CTE. One recent study found CTE in 99% of NFL players. The game is so violent it’s destroying the bodies of the players we love.

We are praying for Damar Hamlin. But what happened to him could happen to anyone who plays football, so at what point do we need to say wait a minute, why are we celebrating this sport? How do we let our hearts go out to Hamlin and then plop down on the couch next Sunday like nothing ever happened? I still have visions of the Miami Dolphins quarterback Tua Tagovailoa being thrown to the ground earlier this year and lying there holding up his fingers in a bizarre position. These sorts of moments are far from rare because this great sport puts people’s lives and bodies at risk — it can happen quickly, as in the case of Hamlin or Stingley, or it can be a slow degeneration like Seau and all the others who develop CTE. Football fans are attracted by the violence, but our enjoyment comes at what cost? Are we not complicit — our love of football is what brings so much money into the sport that players can earn six or seven or eight figures a year, but how much money is enough to risk your life?

Years ago, Malcolm Gladwell called football a “moral abomination,” and he said it was akin to dogfighting. Gladwell predicted that the violence in football would one day force many institutions to consider dropping it. At some point, the profits and supposed glory from football will no longer be enough to mitigate the risks.  Gladwell predicted that because it’s so dangerous many high schools would drop it from their offerings and many colleges would, too. Certainly, none of the schools that you see in the national rankings would drop football, but places that don’t need football like Harvard or Yale would say no more and other schools that don’t need it would follow, lessening the number of people the game puts at risk. Gladwell’s prediction has not yet come true, but how many more Hamlins and Seaus do we need to see before we say maybe we should consider another path. At what point do we see football as a group of athletes from the working class playing athletic Russian Roulette for the entertainment of the middle class and the enrichment of a small group of wealthy owners?