Race takes center stage in the battle for House speaker

On day two of House floor votes for the speaker of the House, Rep. Byron Donalds, who is Black, was nominated by fellow Republican Congressman Chip Roy.

Just a couple hours before the U.S. House of Representatives convened on day two of Republicans’ attempt to elect a speaker of the House, President Joe Biden told reporters on Wednesday, “I hope they get their act together.”

On Tuesday, Republican leader Rep. Kevin McCarthy of California failed three times to secure the needed 218 votes from his party, which currently holds a slim majority over Democrats. For the first time in 100 years, the House has no speaker and, by proxy, no one to swear in the other current 433 members of the House.

On Wednesday, Republicans again nominated McCarthy and U.S. Rep. Byron Donalds of Florida for speaker. Democrats unanimously nominated House Minority Leader U.S. Rep. Hakeem Jeffries of New York. After a fourth, fifth and sixth round of votes, neither nominee got the needed 218 votes.

Donalds, who is Black, was nominated by U.S. Rep. Chip Roy, R-Texas, who argued: “this country needs a change.” He noted that the nominations of Donalds and Jeffries mark the first time in U.S. history that two Black Americans have been nominated for speaker of the House. He added, “we don’t seek to judge people by the color of their skin, but rather the content of their character.”

In a tweet amidst floor votes, Rep. Cori Bush, D-Mo., blasted her Republican colleagues for using Donalds as a “prop” for diversity. Bush said Donalds is “not a historic candidate for Speaker.”

“Despite being Black, he supports a policy agenda intent on upholding and perpetuating white supremacy,” she wrote. “His name being in the mix is not progress—it’s pathetic.”

Republicans have a history of trying to mirror diversity reflected in the Democratic Party. When Barack Obama became the nation’s 44th and first Black president, the GOP elevated Michael Steele as the first chairman of the Republican National Committee. Most recently, the party nominated Black Republican Herschel Walker for U.S. senator in Georgia against Black Democratic incumbent Sen. Raphael Warnock. Unlike Steele, Walker was largely seen as not qualified for the job.

In response to this historic moment of a constitutional stall in Congress, President Biden said, “It’s a little embarrassing it’s taking so long, and the way they are dealing with one another.” Speaking about what this moment signals internationally, he said, “This is not a good look, this is not a good thing for the country.”

The 46th president also acknowledged to the press, “The rest of the world is looking.” 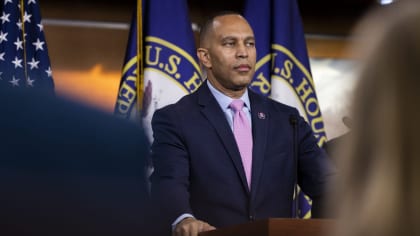 In contrast to the logjam on Capitol Hill, Biden said, “What I am focused on is getting things done,” as he headed to Covington, Kentucky, to promote newly announced investments in the nation’s roads and bridges through the Infrastructure Investment and Jobs Act that he signed into law in 2021.

As the nation waits to see who will be the next speaker of the House, bills are not being introduced or passed in the lower chamber of Congress. From a constitutional standpoint, without a speaker, there is also currently no one to serve as third in the presidential line of succession if anything were to happen to the president and the vice president.

Capitol Hill employees and congressional staffers, theGrio learned, are sending messages to one another, questioning if they are official staff without the swearing-in of Congress members, and have expressed worry that they will subsequently not get paid. What’s more, if a speaker of the House is not chosen by the end of next week, House committee staffers will not be paid.

Typically, in January, the speaker of the House sends a formal request to the White House for the president of the United States to deliver remarks to the nation with his State of the Union address. It is unclear when the president will deliver the annual speech without a speaker installed.

In the midst of political turmoil in the House, U.S. Rep. Sheila Jackson Lee, D-Texas, told theGrio, “Republicans failed to even uphold their bargain majority by not even setting up a government to help the American people survive today’s challenges, and American families take care of their children.” She added, “Enough is enough!”

U.S. Rep. Hank Johnson, D-Ga., described Wednesday’s House speaker dilemma as a “day of chaos, crisis, and confusion for the Republicans.” He told theGrio that “the contrast could not be greater” when juxtaposed to the 117th Congress led by Speaker Nancy Pelosi.

“I just hope for the sake of the nation that we can select the speaker and then allow Congress to get sworn in so that we can begin the work of the people of this country,” said Johnson. The congressman said he fears the inability of Republicans to work together to elect its speaker, which only signals more chaos.

“We’re going to have to fight them every step of the way to keep the government open, to raise the debt ceiling, to fund a government that promotes the general welfare in addition to promoting and protecting the common defense,” Johnson added. “Those are the things that we must do as a Congress.”

Democrats have been solidly united as Republicans remain divided on who they want to elect as the next speaker. Jackson Lee said her Democratic colleagues “came to govern and lead America.” The longtime congresswoman said that Democrats have also added to “America’s changing history by nominating as speaker Hakeem Jeffries in the aftermath of a little over 150 years since the end of slavery.”