The CBC welcomed 58 members in the 118th Congress as the drama unfolds on Capitol Hill to elect the next speaker of the House.

A new and expanded Congressional Black Caucus was sworn in during a Tuesday ceremony for the 118th Congress. The swearing-in ceremony saw the installment of a historic 58 members of the caucus who serve 18 million Black Americans.

From the Anthem Theater at The Wharf in Washington, D.C., the group of Black lawmakers, comprising the largest ever CBC, focused on the progress of the last Congress and the leadership of the new Congress, particularly one of its own members, New York Congressman Hakeem Jeffries, who was elected as the new minority leader for the Democratic Party in the U.S. House of Representatives.

U.S. Congresswoman Stacey Plaskett of the U.S. Virgin Islands told theGrio at the event that part of the “mandate” for the Congressional Black Caucus in the 118th Congress will be to ensure that the “incredible work” of the last Congress is “actually administered and gets on the ground to the American people, and particularly to our Black communities.”

More broadly, Plaskett said that Democrats will also “hold this Congress accountable for its actions to try and be a block and tackle any foolishness that [Republicans] try to bring out,” including the potential “thwart our forward progress.” She added that the CBC will “continue to fight for” issues like voting rights, criminal justice reform, and racial equity. 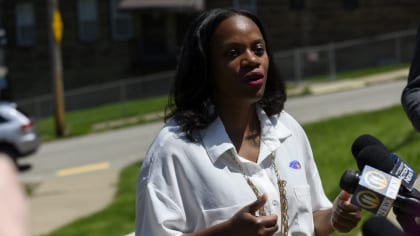 Also Read:
History-making Summer Lee is ready to ‘fight’ and ‘put on for Black folks’ in Congress

Many of the speakers at the CBC ceremony expressed their adulation for Jeffries as the new Democratic leader and their hopes that he could soon become the House’s next speaker if Democrats were to take back the majority in 2024. Jeffries would become the first African American speaker in the House.

A few hours after the CBC ceremony, Jeffries’ name was lifted up by House Democrats on Capitol Hill as the lower chamber of Congress voted to confirm the next speaker of the House. While Jeffries failed to get the needed 218 votes in a Republican-majority House, he was able to secure more votes than Republican leader U.S. Rep. Kevin McCarthy, who is currently engaged in a battle with his own party to secure the speaker’s gavel.

As theGrio previously explained, a faction of the GOP has refused to back McCarthy because they feel he is not conservative enough to go up against Democrats over the next two years. In efforts to secure the leadership role, McCarthy threatened to punish any Republicans who voted against him by preventing their choice of House committees and blocking them from serving as committee chairs. To date, the House has held three roll call votes for speaker. Neither McCarthy, Jeffries nor any other nominee, received the needed 218 votes to assume the top position.

To some, McCarthy is somewhat of a divisive political figure. The Republican leader maintains close ties to former President Donald Trump, notably going to visit Trump in Florida after the Jan. 6 insurrection, and seemed to admit that the infamous Benghazi hearings in 2012 were aimed at ruining Hillary Clinton’s future run for president.

Regardless of who Republicans vote in as speaker of the House, Congresswoman Plaskett said Democrats are prepared to fight against Republicans, who plan to pursue an investigation into President Joe Biden’s son, Hunter Biden, and hold up many of the Biden-Harris administration’s agenda.

“The clown show has come to Washington, and we’re going to expose each one of them, try and pull off the mask that they have and expose them to the American people, while at the same time, directing the American people back to the issues that matter,” said Plaskett.

He added, “It’s what the Congressional Black Caucus has done for the last 51 years. We’ll continue to do it until we retake our gavels in two years.” 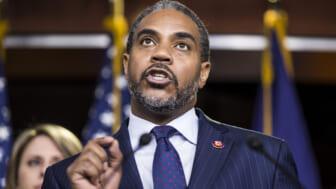 As far as what the White House will do about the dramatic events happening on the other side of Pennsylvania Avenue, press secretary Karine Jean-Pierre said, “the president will not insert himself in the process.”

Separately, Jean-Pierre told theGrio that President Biden thinks Jeffries is “incredibly impressive” and is looking forward to working alongside him as the new House Democratic leader.

“It’s important to see that type of representation at that level. But aside from that, Hakeem Jeffries is a brilliant thinker, a great legislator,” said Jean-Pierre. “We congratulate him on his new role, and we’ll continue to work closely with him.”