Immigration proponents say the Biden-Harris administration’s latest strategy to reduce people from coming to the United States border is “unacceptable.”

As the Biden-Harris administration seeks to strengthen security and reduce surges at the U.S.-Mexico border, advocates for Black migrants say some of the president’s new policies will add to what they argue are long-existing racial biases in the United States immigration system.

President Joe Biden made his first trip to the southern border in Texas on Sunday to assess border security in the region, then traveled to Mexico for a host of meetings this week. Biden’s trips to Texas and Mexico come days after announcing new sweeping border and immigration policy measures. One of those announced rules will expand the administration’s enforcement of Title 42, a Trump-era public health law enforced during the COVID-19 pandemic that has been long loathed by immigration advocates.

The government will also move to expedite expulsions of migrants who enter the U.S. without permission or do not have a legal basis to remain. Those migrants are also subject to a five-year ban on reentry.

Rather than trying to enter the country at the border, Biden officials are asking that migrants instead apply online using the Customs and Border Patrol app, CBP One, and schedule an appointment in order to begin a protection claim. Applying online is the administration’s strategy to reduce the number of migrants at the border, which has reached record levels in the past two years amid instability in the Caribbean and countries in the southern hemisphere. 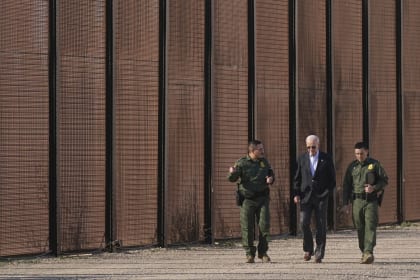 Jozef and other immigration advocates have expressed concern that the latest moves by the administration seek to prevent migrants from crossing the border, thereby denying their legal right to seek asylum. Current U.S. law established by The Refugee Act of 1980, passed by Congress and signed by President Jimmy Carter, allows migrants to seek asylum, regardless of their port of entry, for protection from persecution “on account of race, religion, nationality, membership in a particular social group, or political opinion.”

During a conference call with a coalition of immigration advocates, Jozef said of the Biden-Harris administration’s new policy to prevent migrants from coming to the border: “How are you going to be able to apply for a program that is supposed to save your life and, at the same time, not having any access to actually seek asylum at the U.S.-Mexico border?”

“‘Do not come, stay where you are’ has been rhetoric of the U.S. government of the Biden administration,” she added, “but it’s completely disconnected from the reality of people fleeing to seek asylum.”

Jozef said she is particularly concerned about the impact of the U.S. immigration policy on Black migrants. “To return Haitians, Black people, to Mexico where they are unsafe and unable to survive is unacceptable,” she said.

Immigration proponents also take issue with the administration pursuing an asylum ban, which they fear would have disproportionate effects on Black migrants.

Eleanor Acer, director of refugee protection at Human Rights First, said such a ban would be a “tremendous political miscalculation that will play into the hands” of allies of the Trump administration, which had been slammed repeatedly by advocates for what they argued were intentionally racist immigration policies.

“[It] will cause disorder rather than order, turn away Black and brown refugees that suffer grave harm, separate families and subvert refugee law and human rights,” said Acer. 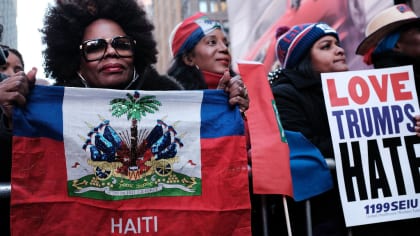 Last week during a White House press briefing, Press Secretary Karine Jean-Pierre said she took “issue” with comparisons to the Trump administration, which she noted, “tore babies away from their moms, from their parents, from their families.”

“This is not this president,” she maintained.

Jean-Pierre read out a list of things the Biden administration has done to expand immigration for vulnerable migrants, including increasing work visas for Central America and Haiti and expanding Temporary Protection Status (TPS) for Haiti and other countries.

“Is there work to do? Is this just one step? Yes,” she said. “And we are going to continue to work with Congress to make sure that we are truly fixing this problem.”

In its new announcements, the Biden-Harris administration has also expanded a parole program previously established for Venezuelan migrants, extending it to up to 30,000 migrants per month for Haiti, Cuba and Nicaragua. To qualify, migrants must have an eligible sponsor and pass vetting and background checks. If eligible, they can be authorized to work in the United States for up to two years. But advocates have dismissed the program as a “wealth test.”

A spokesperson for the #WelcomeWithDignity campaign, which organized the conference call with immigration advocates, said one of their biggest concerns is the administration’s requirement that people who apply for the program be able to “pay for their own airfare into the United States and have a valid passport.”

“Only middle-class and upper-middle-class people from Cuba, Haiti, Nicaragua and Venezuela can afford a plane ticket into the United States,” said Bilal Askaryar, the #WelcomeWithDignity communications director. “You’re also asking people who are fleeing a government to ask that government for a passport.”

Melissa Crow, director of litigation at the Center for Gender and Refugee Studies, noted that requiring migrants to begin the process of seeking asylum on a mobile app presents a particular challenge for Black and brown migrants. “They may not have cell phones, reliable internet access or even be aware of the CBP One app,” said Crow. “And we have really serious concerns about the app’s accessibility to indigenous language speakers and other particularly vulnerable groups.”

Jozef also said she is concerned that Haitians, most of whom speak Haitian Creole, will also not be able to understand the app.

Crow warned that the CBP One app could create a “new asylum waitlist that CBP officials will use as a basis to reject asylum seekers who go directly to the border.”

“CBP’s systematic turn backs of asylum seekers at ports of entry violates the government’s mandatory duties under the immigration laws to inspect and process such individuals,” she said.

Black members of Congress have also expressed concerns with some of the Biden-Harris administration’s new border policies. Democratic U.S. Rep. Steven Horsford of Nevada, the new chair of the Congressional Black Caucus, said while the new parole program intended to “fast-track” the processing of asylum cases, “the reality is that the administration’s actions have the potential to threaten migrants’ safety and humanity.”

After the administration’s announcement, CBC members met with Homeland Security Secretary Alejandro Mayorkas to express their concerns, including the continuation of Title 42.

“The CBC and Secretary Mayorkas took a step in the right direction by working together to begin to develop a whole-of-government approach to addressing migration at our ports of entry,” Horsford said in a public statement. “The CBC looks forward to working with the Biden-Harris Administration to identify and provide humanitarian-focused solutions in the fortification of our nation’s immigration policies, as we recognize the urgency of this matter and remain committed to comprehensive immigration reform.”