Kevin McCarthy is the participation trophy of U.S. House speakers

OPINION: The way this man kept making them vote again and again until he “won”  the role of House speaker was unreal.

He is from Bakersfield, Calif., making him the second “greatest thing” to come out of that podunk town — the first being meth.

McCarthy attended Cal State Bakersfield, which, lol. In our great state of California, we have a number of top-tier colleges and universities that are state schools, and let me tell you — Bakersfield is not one of them. CSUB is not at the top of anyone’s list of colleges they hope to get into except people who want to continue their townie high school experience, and they are from Bakersfield.

No offense to other people from Bakersfield, but y’all know I’m not lying. 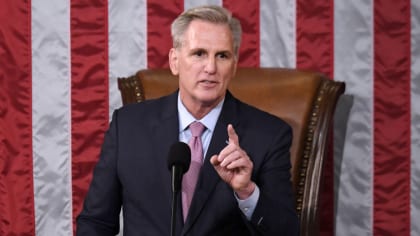 Also Read:
The Republican House of Representatives is a serious threat to democracy

Kevin is the fourth generation of his family to live in Bakersfield, which is to say this man never left home. He goes to Washington to “work” for his constituents, and then he returns right back home to Methville, U.S.A.

I say all of this to say Kevin McCarthy is absolutely used to being an underachiever. It’s probably in his DNA. Even as a politician, his achievements aren’t that great. He quite literally represents a district full of cows, conservatives and meth heads. I’m sure it wasn’t hard to get those votes.

He ran into trouble last week, however.

In his pursuit of the title of speaker of the House, he had to force his colleagues into voting 15 times, making everyone stay at work all late just because he wasn’t getting his way. He is the first speaker to not be elected on the first ballot since 1923, and his election to that role is the first time it has taken more than nine ballots to elect a speaker since 1859.

In other words, Kevin McCarthy has made history for being an unliked idiot from Bakersfield.

What happened last week was ridiculous, and the number of concessions McCarthy had to make in order to get his fellow Republicans to vote for him is likely to come back and bite him in the proverbial ass sooner rather than later.

Kevin McCarthy is the kid who had to give everyone else on the playground a bunch of candy and other things in order to get them to play with him. He is the “participation trophy” of House speakers. Nancy Pelosi would never.

For that matter, a Black man would have never been able to pull off what McCarthy did either. Imagine if Hakeem Jeffries had demanded repeated votes in order to become the House speaker. Those conservatives would have shut that down so quickly, but when the person doing it is a mediocre white man, they will allow it.

Hakeem Jeffries should be the speaker because Kevin McCarthy would never be able to give a speech as eloquent as the one Jeffries gave after McCarthy was finally elected.

The best part about all of this is McCarthy really thought aligning himself with the “serially bankrupt carnival barker” of presidents, Donald J. Trump, would give him some kind of leverage in all this, and hahahahaha, he was moded.

The most revealing thing about all of this is the affirmation that Republicans don’t care anything about government or doing the will of the American people. They only care about power and being in power and having all the power. That was evident with this McCarthy stunt and the way his colleagues acted in light of his actions.

We are in for a world of hurt, America.