US launches online system to seek asylum on Mexican border

The government’s app is currently available only in English and Spanish.

The Biden administration on Thursday launched an online appointment system as the only way for migrants to get exceptions from pandemic-era limits on asylum — the U.S. government’s latest major step in eight days to overhaul border enforcement.

U.S. Customs and Border Protection began allowing migrants to make appointments up to two weeks out using its website and through CBPOne, a mobile app that the agency has used in limited ways since 2020. CBPOne is replacing an opaque, bewildering patchwork of exemptions to a public health order known as Title 42 under which the government has denied migrants’ U.S. and international rights to claim asylum since March 2020.

Until now, CBP has arranged exemptions through advocates, churches, attorneys and migrant shelters, without publicly identifying them or saying how many slots were available. The advocates have chosen who gets in, with CBP having final say.

Under the new system, migrants apply directly to the agency and a government official will determine who gets in. Their appointments will be at one of eight crossings — at Brownsville, El Paso, Hidalgo and Laredo in Texas; Nogales, Arizona; and Calexico and San Diego in California.

Exemptions for Title 42 are meant to go to the most vulnerable migrants.

Thursday’s rollout is separate from measures announced last week to expel migrants from Cuba, Haiti, Nicaragua and Venezuela to Mexico under Title 42 and — at the same time — allow up to 30,000 migrants from those four countries to be admitted to the United States every month under humanitarian parole for two years if they apply online, pay their airfare and provide a financial sponsor.

While the administration previously signaled that it would introduce CBPOne for people seeking asylum at land border crossings with Mexico, the speed of change caught advocates off-guard. 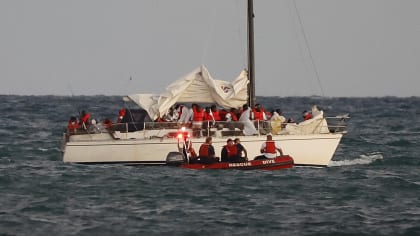 U.S. officials told advocates Friday they expected the app to be ready in a month, Orta said. Then on Monday, advocates were informed the rollout had been moved up to this week.

Under Title 42, the U.S. has expelled migrants 2.5 million times since March 2020 on grounds of preventing the spread of COVID-19. To qualify for an exemption under CBPOne, migrants must have a physical or mental illness, disability, pregnancy, lack housing, face a threat of harm, or must be under 21 years old or over 70.

The government’s app is currently available only in English and Spanish and requires access to a smartphone, email and reliable internet.

The Homeland Security Department said the app will be available to migrants in central and northern Mexico. Secretary Alejandro Mayorkas said in a statement that it allows people “to seek protection in a safe, orderly, and humane manner and to strengthen the security of our borders.”

It’s the administration’s latest attempt to address extraordinarily high numbers of migrants at the U.S.-Mexico border, many of whom are fleeing inequality and violence at home. U.S. authorities stopped migrants 2.38 million times in the fiscal year that ended Sept. 30, up 37% from 1.73 million times during an unusually busy 2021.

Savitri Arvey, a senior policy adviser at the Women’s Refugee Commission, said she struggled to explain all the recent policy changes to migrants during a visit to Monterrey, Mexico.

“It was just impossible in (migrant) shelters,” she said Thursday. ”‘There’s this option for you, Venezuelans but not for you, Central Americans,’” she said.

Some advocates welcomed the new system for seeking exemptions, saying it the old one was rife with favoritism and prone to corruption. CBP began working with advocacy groups to select people who are exempt from Title 42 during President Joe Biden’s first year in office.

Albert Rivera, director of the Agape Mision Mundial shelter in Tijuana, said he previously didn’t have the connections to help migrants get exemptions, but on Thursday a Mexican woman at his shelter was able to sign up for an online appointment.

“We feel excited,” said Rivera said. “Everything was a monopoly.”

Last month, The Associated Press reported that Calvary Church in the San Diego suburb of Chula Vista was getting 40 exemptions a day and doling them out to people who paid $1,800 each or $3,500 for a married couple. Asylum is supposed to be free and intended for those most in need. About a week after the AP story ran, the church-linked group that facilitated exemptions, Most V USA, said CBP decided to stop working with it.

CBP has been giving 180 exemptions a day in San Diego, Enrique Lucero, director of migrant affairs for Tijuana, Mexico, said this week. El Paso, Texas, was said to be getting 70 exemptions a day.