Denver to pay $325,000 for blasting couple’s car with pepper balls

Shaiitarrio Brown and a pregnant Brittany King were residing in their vehicle when the toxins from the pepper balls rendered it uninhabitable, according to their lawsuit.

The city of Denver has agreed to pay $325,000 to a couple whose car was pepper ball-blasted in 2020 during demonstrations over the death of George Floyd, rallies in which they weren’t participating.

According to The Denver Post, Shaiitarrio Brown and Brittany King, who sued the city in 2021 for their injuries, were awarded settlement payments on Monday, which the Denver City Council approved.

The two claimed in their federal lawsuit that on May 30, 2020, they were driving close to Denver’s Civic Center while doing their jobs for food delivery service DoorDash and were not harming anyone, The Post reported. A video of the early-morning incident that a bystander captured showed no sizable protester gatherings nearby.

At an intersection, a Denver officer fired a small plastic ball known as a “pepper ball” — which contain irritating chemicals that burn the skin and eyes — at the couple’s car, causing Brown to step out of it and yell at authorities, “You shot a car with a pregnant woman in it!”

Per the bystander footage, officers reacted by firing dozens of pepper balls at Brown and the automobile, striking King — who was 19 weeks pregnant at the time — in the stomach and Brown in the face through an open car window.

“It was pretty vicious,” Brown reportedly told The Washington Post.

Toxins from the pepper balls filled their car’s interior, in which Brown and King were residing at the time, The Denver Post reported. The police’s actions rendered their vehicle uninhabitable due to the irritants. 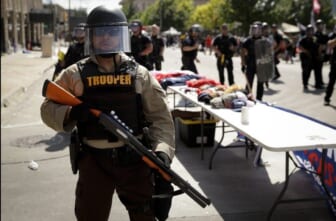 Also Read:
Injuries at protests draw scrutiny to use of police weaponry

According to The Washington Post, the couple claimed that officers confronted them after they drove away and went to an ambulance for medical attention. King had chemical burns and a broken hand, while Brown sustained wounds and bruises.

King said tests at the hospital revealed that the pepper balls’ chemicals were in her system, and she struggled to swallow or eat for months due to burns in her throat. According to the lawsuit, the pepper balls also included substances that could result in pregnancy loss or birth defects.

“When I was pregnant, it was just hoping,” King recalled, according to The Washington Post. “I was just waiting for birth. To see her that first time, to make sure she’s okay.”

The couple’s daughter, Brooklyn, was born in October 2020. She exhibited severe developmental deficits at the age of nine months, per their lawsuit. King said Brooklyn had hip dysplasia, a disorder that causes the hip joint of a newborn to be deformed. 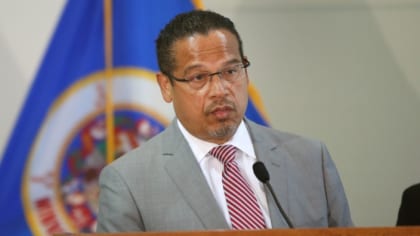 According to an internal review of the incident conducted by Denver’s Office of the Independent Monitor, there was “no policy violation” based on the available evidence.

Brown and King, who are now engaged, left Denver because they claimed police there continue to make them feel uneasy. Brooklyn, now two years old, continues seeing specialists and has reportedly progressed.

“We got money out of it,” Brown said, The Washington Post reported. “But we’ve still got no accountability, so there’s no closure for us at the end of the day.”