Injuries at protests draw scrutiny to use of police weaponry

'When we see riot gear, as black people it takes us back 400 years,' community organizer Ron Moten says 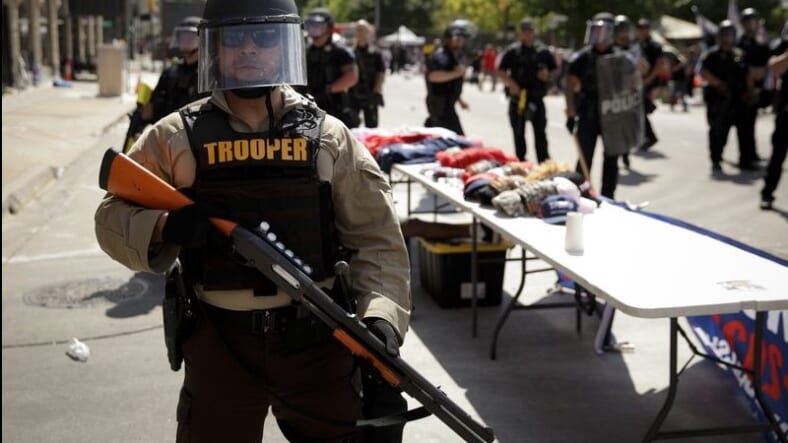 But the now-familiar scenes of U.S. police officers in riot gear clashing with protesters at Lafayette Park across from the White House and in other cities have police critics charging that the weaponry too often escalates tensions and hurts innocent people.

“When you see riot gear, it absolutely changes the mood,” said Ron Moten, a longtime community organizer in the nation’s capital who was out demonstrating this weekend. He said it takes away any perception the officers could be empathetic.

“If I went up to speak with a police officer and I’m covered in armor and holding a shield and a stick, don’t you think they would regard me as a threat?”

“When we see riot gear, as black people it takes us back 400 years,” he said.

Protesters in Denver arrived at the hospital with injuries from police projectiles that caused one person to lose an eye and left three other people with permanent eye damage, said Prem Subramanian, a physician who operated on some victims following demonstrations late last month.

“They weren’t accused of any crime, and they came in with devastating eye injuries,” Subramanian said, adding that he was so upset about it that he complained to city officials, who promised to investigate any abuses. “We’re learning the consequences of using these weapons.”

He said the injuries rivaled what he saw treating shrapnel damage to eyes of soldiers at Walter Reed National Military Medical Center who were injured by explosives in Iraq and Afghanistan.

Rubber bullets and similar projectiles have damaged eyes or blinded at least 20 individuals from ages 16 to 59, according to the American Academy of Ophthalmology, since protests began over the death of George Floyd in Minneapolis.

Other tactics were on display at Lafayette Park, where police used chemical agents to break up a peaceful protest minutes before President Donald Trump posed for pictures outside a nearby church this month. In Buffalo, an officer used a baton to shove a 75-year-old man to the ground before that officer and others marched past as blood collected beneath the man’s head.

Amnesty International, a global human rights group, has questioned whether equipping officers “in a manner more appropriate for a battlefield may put them in the mindset that confrontation and conflict are inevitable.”

The growing use of less-lethal weapons is “cause for grave concern” and may sometimes violate international law, said Agnes Callamard, director of Global Freedom of Expression at Columbia University and a United Nations adviser.

She said the “basic rationale for less-lethal weaponry is legitimate” after courts called for law enforcement agents to be given equipment enabling them to respond proportionately when necessary. In 1990, the U.N. issued basic principles on their use.

Projectiles caused 53 deaths and 300 permanent disabilities among 1,984 serious injuries recorded by medical workers in over a dozen countries from 1990 to 2015, said Rohini Haar, an emergency room doctor in Oakland, California, and primary author of the 2016 Physicians for Human Rights report assembled with civil rights groups.

She said there “are so many cases of misuse, it seems almost impossible to use them correctly.”

Whether rubber, foam or bean bags, they exit guns with the force of a bullet and should not be used against protesters because they can maim and bounce or ricochet unpredictably, Haar said.

Police, private security forces and military units seek to cause pain or incapacitate individuals with more than 75 types of rubber or plastic bullets from manufacturers in countries including the U.S., Brazil, China, Israel, South Africa and South Korea, according to the report, “Lethal in Disguise.”

READ MORE: I was on the ground for Minneapolis protests. Here’s what I saw.

Wade Carpenter, police chief in Park City, Utah, said the tools are necessary when peaceful rallies are “hijacked by individuals that have come in with a nefarious purpose to create the riots, the looting, those type of things.”

Many police forces “are very stringent on their training,” said Carpenter, an official with the International Association of Chiefs of Police, which has 32,000 police official members in 167 countries. “They’re very accountable, and others, you know, it’s kind of all over the board.”

Officers target lawbreakers who attack police with bricks or baseball bats, but sometimes less-than-lethal options are “not perfectly accurate, so, that’s always a risk and those are calculated risks,” Carpenter said.

It’s not just projectiles. Chemical irritants, banned in warfare by international law since 1925, are also criticized.

Police officers hold their line during protests on September 21, 2016 in Charlotte, NC. The North Carolina governor has declared a state of emergency in the city (Photo by Sean Rayford/Getty Images)

Chemical agents sometimes cause violent coughing, a worry during a pandemic. A 2012 study of more than 6,700 U.S. Army soldiers concluded that a common riot control chemical agent more than doubled the chance of contracting an acute respiratory illness such as pneumonia.

Acting on a federal lawsuit, a judge in Denver temporarily limited the use of projectiles and tear gas by the police, finding a strong likelihood that the police department violated constitutional rights.

In early June, the police chief in Austin, Texas, said his department would no longer fire beanbag projectiles at crowds after two demonstrators were hospitalized after being hit in the head, including a 16-year-old boy.

In New York City, the nation’s largest police department has not used rubber bullets or tear gas during protests. At a City Council hearing, police officials were pressed on whether officers should even be armed with batons after the city’s mayor promised “minimum force.”

Carpenter, the Utah chief, said Floyd’s death left all officers feeling it “tarnished all of their badges” and do not relish the violence that’s come with some of the protests.

“We live, many of us, in the communities we police,” Carpenter said. “Unfortunately, there are instances like this that have happened that have really created a wedge between officers and the communities they serve and love.”