Esti Maxine Stephens was born Jan. 13 and is the third child of the celebrity couple.

John Legend and Chrissy Teigen formally announced the arrival of their new baby. The couple showed an image of the newborn on social media.

On Thursday, Teigen posted a photo of her and Legend’s new daughter Esti Maxine Stephens on her Instagram page. She was born on Jan. 13. The photo shows big sister Luna and big brother Miles holding baby Esti Maxine.

In the caption, Teigen wrote “the house is bustling and our family could not be happier.” She also revealed how Legend showed his emotions following the baby’s arrival, while thanking their supporters.

“Daddy sheds nightly tears of joy seeing Luna and Miles so full of love, and I am learning you still need diapers with a c-section!? We are in bliss,” Teigen wrote. “Thank you for all the love and well wishes — we feel it all!”

Legend also posted the same photo to his Instagram page with his own message.

Teigen first revealed that she and Legend were having another child in August 2022. This was her first pregnancy since losing their son Jack 20 weeks into pregnancy in September 2020 due to complications from partial placental abruption.

The author and television host revealed in September 2022 that while she and Legend told the world that she suffered a miscarriage, she didn’t realize until sometime later that she had an abortion, according to The Hollywood Reporter. The pregnancy was terminated as it became life-threatening to Teigen. 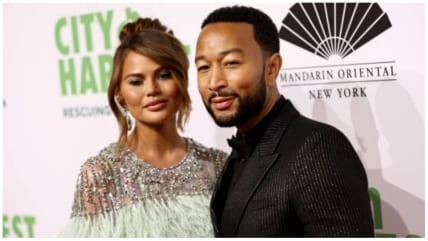 Also Read:
John Legend’s skincare secret? Showering with Chrissy Teigen and a little something else

“On Friday, we welcomed Esti Maxine Stephens to our family, and our house is overflowing with love and joy,” the EGOT winner posted. “I’m in awe of Chrissy’s strength and resilience and I’m so thrilled to see how Luna and Miles embrace their baby sister. I’m so, so grateful, but that doesn’t seem like a big enough word.”

“It became very clear around halfway through that [Jack] would not survive, and that I wouldn’t either without any medical intervention,” Teigen said. “Let’s just call it what it was: It was an abortion,” the star said. “An abortion to save my life for a baby that had absolutely no chance. And to be honest, I never, ever put that together until, actually, a few months ago.”

Legend and Teigen will celebrate their 10th wedding anniversary this September.