The 10 most underrated Black films and performances of 2022

OPINION: Yes, the Oscar nominations are out, but here’s a list of outstanding performances by Black actors and directors that deserve our attention.

Let me start by saying what I always say: I do not find the Oscars to be a legitimate arbiter of Black talent or achievement. They are, historically and by design, a union-busting, anti-Black operation that has, in recent years, let some Black artists in the door and even given some of them awards or (more likely) nominations to keep the outcries of #OscarsSoWhite at bay and to keep Black artists striving for white approval and validation.

While having Black talent associated with the Oscars has always benefitted the Oscars — take for example last year’s event, produced by the first all-Black team and opening with a Beyoncé performance, (not to mention “The Slap,” which let white Hollywood ring its hands self-righteously for months afterwards in the news) all of which raised ratings by 58% compared to 2021’s event — rarely is the reverse true. Ask Oscar winners Mo’Nique, Halle Berry and even Viola Davis (who will likely EGOT this year, but still shared she was “nowhere close” to the pay and opportunities of her white counterparts even after her 2017 Oscars win).

They need us. We don’t need them. 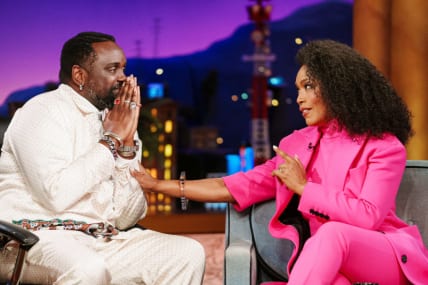 With that said, here are the 10 outstanding performances of 2022 that aren’t getting enough praise.

I’ve already gushed about Sope Dirisu’s swoon-worthy turn as the titular Mr. Malcolm in another article but why not do it again? Dirisu has the kind of romantic leading man charm that cannot be bought and Zawe Ashton plays the woman scorned with so much heart that you can’t help but root for her to win just a little. And because this is just a delightful film all around, all the lovers do end up winning, but none more than the audience who has been deprived of romantic comedy chemistry for far too long and has finally been rewarded for our trouble.

Where is the love for our girl?! Right here. Lyric Ross gives an earnest performance as orphaned, punk teen Kat who’s grappling with grief and new magical powers at a boarding school in this stop-motion animated horror-comedy. With an anti-prison storyline (co-written by Jordan Peele) fueled by Kat overcoming her demons (played by Keegan-Michael Key and Peele) in order to take down corporate raiders and save her town, “Wendell & Wild” has everything young emo Black girls need, in large part thanks to Ross’ performance.

There’s not enough John Boyega praise for me! He is regal in “The Woman King” but in “Breaking,” a heart-breaking true story, Boyega is riveting. He embodies the desperate father and military veteran Brian Brown-Easley, who holds up a bank after the government ends his disability benefits, leaving him homeless. Boyega is surrounded by a stellar cast in Nicole Beharie, who gives a gripping and emotional performance as the resourceful and compassionate bank manager, and the always dynamic Michael K. Williams, tragically in his last role, as the police negotiator brought in to make sure everyone makes it out alive. The violence of the state is on full display, from the beginning to the end of “Breaking,” with a powerful call to action for change.

I’m thrilled that the Critics Choice Celebration of Black Cinema & TV (of which I am a member) awarded Jonathan Majors for his thoughtful performance of real-life Black pilot Jesse Brown. Majors has been the one to watch since his breakout performance in “Last Black Man in San Francisco” and his range as an action movie star, romantic lead and emotionally conflicted human are all on display in “Devotion.” Director J.D. Dillard’s faithful adaptation of the biography of the same name tells, with dignity and respect, the story of a Black naval pilot who fought in the Korean War and wound up paving the way for other Black pilots who came after him — my father included. I’m not one who enjoys or seeks out U.S. war movies unless they’re deeply critical of U.S. militarism, but Dillard skillfully reins “Devotion’s” focus in on 24-year-old Brown (who believed in the promise of a better life for himself, his wife and their daughter through the military) and the unexpected friendship that would impact his life and legacy. Add in beautiful cinematography and Chanda Dancy’s epic score and you’ve got a compelling film honoring an important man in Black history.

6. Jeremy Pope and Gabrielle Union in “The Inspection”

I was also thrilled that the Critics Choice CBC & TV awarded debut feature filmmaker Elegance Bratton for his autobiographical tale of Black queer survival in the military. But “The Inspection” deserves even more. Jeremy Pope delivers a gut punch of a performance as a homeless teen who joins the Marines after being kicked out by his mother for being gay, only for his new fellow recruits to bully and harass him for being gay. Working from Bratton’s script that hits all the right notes, Gabrielle Union, who plays a version of Bratton’s mother, offers a devastating performance of a complicated woman who wants the false sense of safety for herself and her son that she thinks only performing heterosexuality can give. It’s a heartbreaking and empowering watch that has earned its place in the Black canon. For that, homage must also be paid to my super producer Effie T. Brown for getting this film on the screen. Praise to the whole team of this beautiful film.

(Heads up: violent homophobia. Available for purchase on Prime Video.)

5. Lashana Lynch in “The Woman King” 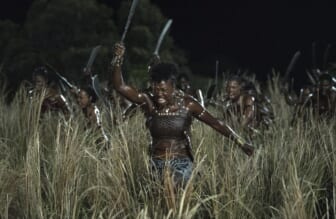 Once again, the Critics Choice CBC & TV came through with all of the love for director Gina Prince-Bythewood and her action-packed, Black-woman-centered, African epic. Viola Davis has also received heaps of praise for playing the titular role, as she should. But we not gon’ pretend like Lashana Lynch was not Lashana Lynch-ing all up and through that movie! Range! Athleticism! Beauty! Heart! Her performance anchored the film and showed us what was at stake, showed us what the sisterhood of these African women warriors was all about. I am a Lashana Lynch supremacist. There is nothing she can’t do.

(Heads up: slavery depicted. Available to rent on streaming platforms.)

Alice Diop’s haunting “Saint Omer” shows the thin line between motherhood and monstrosity. Based on a true story, Diop’s tale follows Laurence Coly (the fantastic Guslagie Malanda) a Senegalese immigrant studying in France who, after years of racist and romantic isolation and financial desperation, kills her baby, claiming sorcery made her do it. Through the lens of a pregnant novelist and professor (the devastating Kayije Kagame) who attends the trial, we see that the generational curses of white supremacy, colonization and patriarchy have been impacting Black women’s motherhood for thousands of years and for whatever faults may lie within our own mothers, we are inextricably linked and reflections of each other. It’s in the reflection, Diop posits with her film, that we might find empathy and compassion for the ones who’ve done wrong. This film sticks to the bones and promises an exciting career for Diop for years to come.

(Heads up: discussion of infanticide. In theaters now.)

This Sundance-winning debut horror feature for filmmaker Nikyatu Jusu has been getting a lot of love (including from the Critics Choice CBC & TV), but it could always get more! I need more praise for Jusu’s incredible script, which explores the horrors of a Black immigrant woman’s experience in America and highlights African mythology as a tool of Black survival, healing and hope throughout the diaspora.

Speaking of Diops, I need more praise for lead actress Anna Diop’s powerful turn as an immigrant mother forced to neglect her own child in order to be the nanny for white people. I need more praise for Jusu’s visionary directing. What she and cinematographer Rina Yang have done with water and light alone in this film should and no doubt will be studied.

2. Regina Hall in “Honk for Jesus, Save Your Soul”

This one got the self-righteous kind of church folk upset, but upset enough to change? Let’s hope. Sterling K. Brown is both hilarious and horrifying as a corrupt megachurch pastor brought to his knees in an abuse scandal. But this is Regina Hall’s movie, and her best performance yet. As first lady to Brown’s corrupt pastor, Hall’s character has taken “stand by your man” to its hilarious and damning limits, her mime dancing in the final act warning that when you do clownery for the patriarchy, the clown comes back to bite. Written and directed by Adamma Ebo in her feature film debut, “Honk for Jesus” proves that Ebo and her producer twin sister Adanne Ebo are a new storytelling force to be reckoned with. Ashé and amen!

Stop playing in Jordan Peele’s face! “Nope” is not only the best movie of 2022, but it’s also Peele’s most brilliant film to date, both in writing and directing, as he examines his own desire to be a part of an industry that was literally created on Black people’s backs while actively excluding us from the narrative. It’s not only a thoughtful sci-fi-horror epic and a subversion of white Hollywood cowboys and westerns, but it’s also a call to action for Black creatives to be very clear on why we want to be a part of this industry and what role we want to play, lest we get caught up in its many traps.

Daniel Kaluuya does more with his eyes than most actors can achieve with a monologue and Keke Palmer is magnetic, with impeccable comedic timing, proving she is one of the most dynamic actors of her generation. Give her piles of cash and get out of her way! Throw in the super fine Brandon Perea and Steven Yeun and you have a cast with which you simply cannot lose.

(Heads up: lots of deaths, including animals. Streaming now on Peacock.)

“Black Adam” is the revolutionary superhero movie I was hoping the “Black Panther” movies would be. But where Black folks’ ideas of revenge against oppressors are demonized and contorted into thoughtless, misguided rage that destroys one’s soul in the “Black Panther” franchise, “Black Adam” lets the people’s champ start a literal revolution of the enslaved against their oppressors in the first five minutes; exposes superheroes as inherently cops and agents of the state (and therefore, indicts superhero films as mere copaganda); and lets Black Adam be a remorseless vessel of revenge in the name of freeing his oppressed people in the Middle East (an obvious nod to the oppressed people of Palestine), with no shame and no negative consequences for him, only the adoration of the people he’s freed. Even if the DCU will never let him do it again, Dwayne “The Rock” Johnson deserves all the praise for starring in and getting a movie this revolutionary out to the people. Cue the Jill Scott meme, ‘cause “that’s what I’m talking about”!

Brooke Obie is an award-winning critic, screenwriter and author of the historical novel Book of Addis: Cradled Embers.