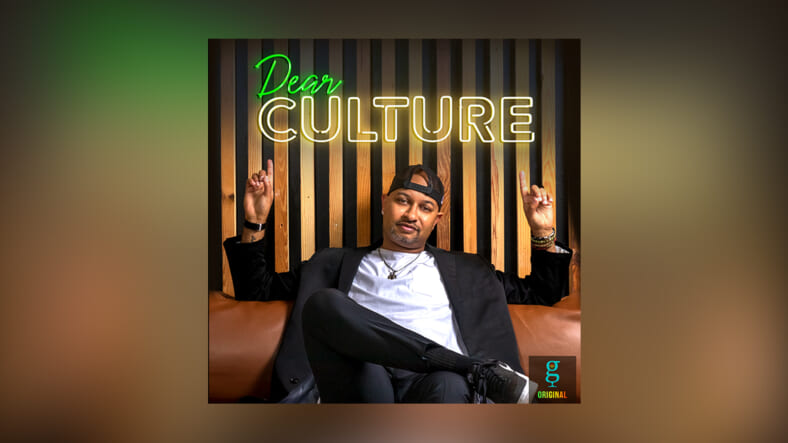 My love/hate relationship with Tyler Perry

Panama Jackson explains why Tyler Perry’s catalog of content is riddled with problems but still worth watching. He also analyzes “A Jazzman’s Blues,” which he believes again … missed the mark. This episode contains movie spoilers.

Panama Jackson [00:00:07] Tyler Perry. One of the most polarizing figures in Black art and cinema. If you’re familiar with him, you either love or hate him. Most likely, I suppose, is the middle ground, and that’s probably where I fit in. But today we’re going to talk about the frustration, the inspiration of Tyler Perry. Today. It’s Tyler Perry Day on Dear Culture, the podcast for by and about the culture. And Tyler Perry. Oh, he’s the culture. What’s going on, everybody? Welcome to Dear Culture. And if you saw that intro, you already know what we’re talking about today. Tyler Perry.

Panama Jackson [00:00:55] I’m a person who’s made countless films. I think he might be up to about 30 now, but he’s made films that your family probably love. Some people in your family probably hate. But for a certain segment of our population, he is the catalyst for so much discussion and debate. He’s a person that’s polarizing. He’s a person that people in your family either know and love. If you’re like my family, you were probably in the early aughts buying DVDs of his stage plays from one of your cousins who was kind of whose employment status was a little bit up in the air, but always seemed to have DVDs for you to buy for five or ten bucks a pop. That’s how I was introduced to Tyler Perry. I remember buying plays like a diary of a mad Black woman. My parents went to go see his plays, come out, find.

Panama Jackson [00:01:49] The stage plays, the chitlin circuit plays. And they loved him. In fact, my parents still love Tyler Perry movies. But in our culture, in our community, there is a rift of sorts. There are some people who absolutely cannot stand his movies cinematically. They think they lack writing or careful writing. They think that the swiftness with which that with which Tyler Perry writes in films means the quality is going to be low. And Tyler Perry himself has acknowledged the fact that he doesn’t even have a writers room. I actually started a podcast at one point that jokingly asked the question, What if Tyler Perry had a writer’s room? My goal was to take a look at all of his movies that don’t feature Madea and see if we could fix the movies or what we would do to the movies to change them, to presumably make them better. His Madea character is one that lots of people loathe. Though I think she’s also extremely funny and a crutch. She’s a gun-toting grandma who speaks her mind and doesn’t suffer fools.

Solea Pfeiffer [00:09:02] My mother, she wanted me to marry a rich man. She told me if I didn’t leave with her they we’re going to kill you. I thought you moved on.

Panama Jackson [00:09:12] In September of this year. 2022. September 11th, I believe, was the fall was the the Netflix release of Tyler Perry’s latest film, A Jazzman’s Blues. Now, let me tell you something. When I saw the trailer for this movie, I was conflicted. Because here’s the thing. I don’t expect greatness from Tyler Perry’s movies. I don’t think he makes these movies to be great. I don’t actually know what his motivations are. I think he believes in telling Black stories, which is what he does. Even if the. The dialog and the scripts need a lot of work. It almost feels most times as if there is no script. Like people show up and just start talking or they get told. Here’s what’s going to happen in the scene. Go. And I actually wonder how that works with. With. Like the more seasoned actors that are in his movies. I mean, the Cicely Tyson of the world, he’s think of everybody, you know, that somebody in the Black community, we’ve all been in Tyler Perry’s movies, the Felicia Rashad’s, the Cicely Tyson’s, Taraji Henson. The list goes on and on. Like, I probably should have printed out a list of all the big names that have been in his movies the Derrick Lewks, Idris Elba. Gabrielle Union. Tracee Ellis Ross. Like the list really is Kimberly Elise. Like, I’m going to end up doing this over and over when I see. But I also wonder if those people who have been in movies and films and things that we really enjoyed, did they get the scripts in advance? Do they get them the day they show up? Who knows? Like, I don’t know. But what I do know is that. Somehow Black people of note want to be in his movies because there’s a respect that they have for Tyler Perry and possibly the respect that they have for the art that’s being created. Like maybe the telling of Black stories trumps the need for it to be told perfectly. Like, you know how we like to say don’t make perfect the enemy of good? Well, I think a lot of times Tyler Perry’s movies aren’t even that good, but maybe people who are making them were like, Listen, I want the opportunity to tell this story. Lou Gossett Jr. Alfred Woodard. I’m just gonna. Sanaa Lathan. I’m just gonna. There’s going to be random outbursts of me naming people who’ve been in these movies as I remember them as we go through it. Like, if I think of a movie and I’m like, Oh yeah, that person has been in this movie. That person is in this movie, too. Bow Wow. Perhaps one of the greatest cinematic actors of all time. I don’t actually mean it, but I really enjoy Bow Wow. He’s wonderful. I really, really. Lauren London. Teyana Taylor. You seen it was that Madea family, family something she called Byron over and it was terrible. But either way. Back to A Jazzman’s Blues. Tyler Perry releases the trailer for JazzMan’s Blues, and I watched all the press run up to it. I read a lot of the articles. I heard the story about how he went to go see an August Wilson film and. You know, it inspired him at that moment to start laying the foundation for what would be A Jazzman’s Blues, which is a story. It’s kind of an unrequited love story. But set in the the Deep South. Jurnee Smollett-Bell. She’s in temptation. Brandy. Lance Gross told them, We keep doing this. In A Jazzman’s Blues. It takes place in the forties in the Deep South. It’s in Georgia. And the premise of the film is like, you have these two people who couldn’t be together for for various reasons.

Solea Pfeiffer [00:12:53] I need you to be happy because we can’t be sad together, you hear me? You are the only person that makes me safe.

Panama Jackson [00:22:55] Van one of the characters on the show, Donald Glover’s girlfriend. Sometimes girlfriend, ex-girlfriend. But they have a child together. Van shows up to do a little work, even though she thinks she’s a little bit too good for it. And her daughter, Lottie, ends up being cast just because she makes a statement on set and boom, all of a sudden. Tyler, I’m sorry, Mr. Chocolate. Mr. Chocolate is the name of the person that owns the studios, has her in like five or six different TV shows immediately. Right, because that’s how quick he works. So you get these and that’s not a good thing, by the way, because, again, it speaks directly to the moment when he he pointed out to everybody that he makes that he doesn’t have a writer’s room effectively in all of us collectively, like, duh. Absolutely. We can tell. We watch your stuff. We know that there’s nobody else helping you out because if you did, things would be different. So it’s like you get art that that critiques him. But art that elevates the way that we see ourselves in these stories. The storytelling, I think, ends up being better. And I think that a lot of these a lot of this are ends up existing in this much better space because a lot of people, like I said earlier, are trying to avoid being Tyler Perry. And I don’t know how I feel about that necessarily, because, again, I do believe that that Tyler Perry is effectively I’m not I used to call him a necessary evil. Right. And I said that because I thought that we needed him because we needed somebody to make more to tell more Black stories and get all these Black these Black people into these movies, which he has done. Right. You know, famously, Taraji said Tyler Perry paid her what she was worth, you know, and she’s somebody who was an Academy Award nominated actress who didn’t feel like she her full worth and full value was being respected by Hollywood. But Tyler Perry. Absolutely right. So I used to say it was a necessary evil, but I don’t I don’t think that anymore because I think that’s that overly that that that makes it way too negative. Like Tyler Perry has given plenty to to the Black community and Black culture. And I think. What I’m going to say is perhaps controversial. I think it’s better we’re better off because of it, because you have all these people who are able to work. You have what I do believe is Tyler Perry inspiring other people to get into the filmmaking game and do it their way. But you get this wave of more creative storytellers. You know, I’m not saying Jordan Peele was was inspired by Tyler Perry. I don’t know. I can’t say that. But I mean, think about the art that is being created. And people will say, well, that ain’t Tyler Perry. That’s real art over there. But then you get more and more of that stuff. But Tyler Perry is still successfully creating his own art. So. You know, there’s this world we live in where I think that Tyler Perry is both. Frustrating because of the art that he creates, but inspiring because of the art, because of what he is, because of his success. And I don’t know exactly what that means for the community, for the culture at large. Right. Like. I don’t want Tyler Perry to stop making movies because I enjoy these. I’m going to watch them like I like. We need more Black stories being told. And frankly, I don’t think Tyler Perry cares. Like I don’t actually know how he feels about criticism. I’ve seen interviews and I remember when he was on the show Black AF and he was talking about the white gaze and he said, Well, he doesn’t care what people think about the art that he makes. What about.

Tyler Perry [00:26:21] Can I just tell you why, Jay Lee? Because, listen, man, I know that I’m telling stories that my folks want to see. I’m talking from our point of view. We’re speaking a language. We’re speaking a shorthand that we get that white people don’t necessarily get.

Maiysha Kai [00:32:09] Don’t forget, you can listen to theGrio’s Writing Black podcast hosted by me Maiysha Kai. This isn’t your typical writing podcast. We interview any and everybody that has anything to do with writing from comics to poets to authors to journalists, to politicians and more. Remember, that’s Writing Black every Sunday, right here on theGrio’s Black Podcast Network, download theGrioo’s app to listen to writing Black wherever you are.