We Are Not Broken: George M. Johnson

This week on the Dear Culture podcast, we’re celebrating the beauty and bravery of Black boyhood. Bestselling author, activist and journalist George M. Johnson returns to talk with host Shana Pinnock and guest host, educator, activist and executive director of The Black Teacher Project Dr. Micia Mosely about a bond between brothers and the importance of family in their new memoir, We Are Not Broken.

For Johnson, sharing the hilarious, heartbreaking and heartwarming stories from their boyhood was a way to not only honor their family and beloved matriarch, but to also dispel the myth and dismiss the notion that Black boys are not deserving of love and joy. According to the Department of Education, Black boys make up 18% of preschool enrollment, but 41% of male preschool suspensions. Johnson says this book adds complexity and in some ways counters that narrative.

Although the early years of Johnson, their cousins and their baby brother are beautifully recalled in the book, the memoir’s central figure is the family matriarch, lovingly called “Nanny.” The book also features heartfelt letters written by various family members detailing her impact and meaning to the family. Johnson said it was important to not only uplift her, but use her story to encourage Black women to show up for themselves the same way they show up for others.

“So that’s why I talk about that story specifically with Black women, because the brunt of community care has always been on them and it continues to be on them.”

While Nanny may no longer be with us, Johnson is carrying her memory and fierce protection with them as they face down ongoing efforts to keep their bestselling memoir, Not All Boys Are Blue, out of school libraries in at least 10 states. Johnson says while the efforts may be disheartening, they know the value of their story and they’re invoking one of their favorite “nannyisms” to clap back at the haters: “You gotta bring ass to get ass.” 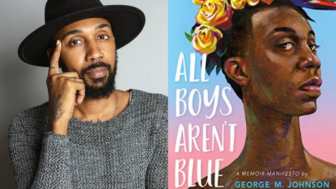 “I hear her every single day saying it to me as I’m going through [it] this with the book,” Johnson says. “Basically what that means is, if anybody is coming at you, they better bring a full whatever at you because if you don’t bring it, you’re never going to get it from me because I’m going to give it to you. That’s literally how I have stayed very grounded in all of this.

Johnson continues, “I was prepared for this. I knew it was coming. I’m not a white queer writer. If I was white and queer and had a story like mine, I would have won a Pulitzer. I would have won every award. It is because I am Black and queer and knowing that I went into this already knowing that there was going to be challenges, and that this particular day was going to come. I just thank her for being a person who never allowed us to be broken, who always instilled in us to keep going and to push back against any type of bigotry and hate that came our way.”

Tune into Dear Culture to hear the entire beautiful conversation and learn why Johnson says why it’s important to create friendship within family.