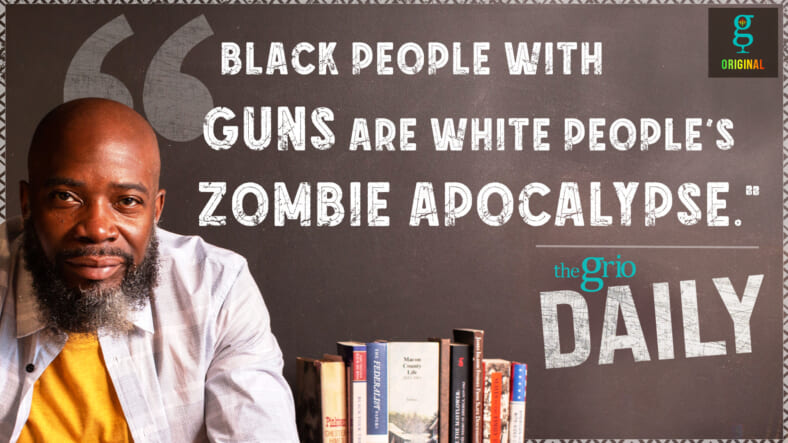 “Black people with guns are white people’s zombie apocalypse.” Michael Harriot breaks down why white people love guns so much. And yes, it all comes back to racism.

Michael Harriot [00:00:05] Welcome back to theGrio Daily. The only podcast that knows the fastest sound in the world is “pew!” My name is Michael Harriot. I’m your favorite wypipologist. I’m here every day to tell you what’s going on in the village. And today we’re going to talk about what’s going on in white America specifically. What’s up with this?

Ted Cruz [00:00:25] If the only people with guns are the jackbooted thugs. Then Liberty is gone.

Jason Asselin [00:00:31] I believe that more guns on the streets will reduce crime.

Michael Harriot [00:00:48] Yeah. Why people love guns. I haven’t looked it up, but I think that firearms might be white people seasoned salt because they put it in everything. The constitution, politics, even the music. And if you think hip-hop is filled with sex and violence, try listening to Kenny Rogers – “Coward of the County.” Because, I mean, bruh, that’s about sex and guns. And I don’t know.

Michael Harriot [00:01:10] I’m Michael Harriot, world famous wypipologist, and this is theGrio Daily. Today, we’re going to try to figure out why white people like guns so much and what’s America’s preoccupation with guns, right? Because half of white households own a gun and that’s a lot. Right. And when you compare it to one in three Black households that own a gun, it’s really a lot. Although the Black gun ownership has been increasing since the pandemic, I think, you know, we’re preparing for the, no not the race war, we’re preparing for the, you know, the zombie apocalypse, which is probably just white people, you know, coming back from the dead to bite us in the neck.

Michael Harriot [00:01:54] Anyway, to understand why white people like guns so much, we got to go back to the beginning, specifically the beginning of America, when we were trying to write the Constitution, this thing called the Constitution. Right. So when we were trying to ratify the Constitution, this dude named James Madison, they call him the father of the Constitution. So I guess he slept with the Magna Carta. Anyway, James Madison was the dude who was primarily responsible for writing Constitution. After he wrote it, he had to go around and get all the other states to sign it. Or what we call it to ratify it. So when it came to Virginia, Virginia had this big ratifying convention, and all of the people who we now know as founding fathers were there and Washington was there, like, you know, all the people from Virginia, Jefferson. Jefferson was in Paris, you know, engaging in sexual assault with his enslaved girl. But the rest of them were there. Right. So James Madison takes the Constitution to Virginia. Right. And immediately this dude named George Mason, who was one of the greatest slave owners in Virginia, he was upset. Right. Now, people will tell you that he was upset because of slaves and slave uprisings, but that’s not really what he was upset about. He was upset about the national army. Right. Because, you know, before then we had militias. So Mason said, man, look, we have this like big, huge national army. Well, most of the people live in the north. Right. And what if they just want to abolish slavery and tell their slaves to come take our guns? So we got to do something to prevent that because like, we can lose all of our property, all of our wealth is basically tied up in slaves. So George Mason said, like, look, I’m not going to sign this thing unless we got something to protect us from against the licentious slaves who were coming to take our property. Right.

Michael Harriot [00:03:55] So James Madison went back and he jotted down these ten things, right, that we now call the Bill of Rights. And the second one was just because of George Mason. Matter of fact, it was almost word for word, something that Mason had put in Virginia’s Constitution, and now we call it the Second Amendment right. And that is what created America’s fascinations with guns. And since then, America has been really adamant about gun ownership, and most of it has been tied to the fear of Black people. Right. So even before George Mason and Madison came together to create the Second Amendment, they had these slave codes. In every state the slave codes said slaves could not own weapons. That was one of the primary duties of the slave patrols to come in and make sure that the slaves didn’t own guns. Right. They were specifically designated as people who took guns from slaves. Right. And after the Civil War didn’t get any better, right? Like they did have slave codes anymore because there wasn’t any slaves. So this group took it upon themselves to just go around and disarmed slaves. Right? You know, they weren’t slave patrollers anymore, so they gave themselves their own name. They called themselves Ku Klux a dolphin. And, you know, that translates to circle of brothers. But then they everybody started calling them by their nickname, the Ku Klux Klan. Right. They were specifically formulated to disarm slaves. And that was America’s first form of gun control.

Michael Harriot [00:05:40] And after that, right gun control became a thing like the fear of Black people and Black uprising. It was key to understanding America’s fascination with girls. And it wasn’t that Black people didn’t own guns. Ida B. Wells, she said, and I quote, “A Winchester rifle should have a place of honor in every Black person’s home.” W.E.B. DuBois said Black people should own guns. And a lot of the violence during reconstruction was about Black people owning guns. Right. Like when you look at, for instance, this crazy thing that happened in the Greenwood section of Tulsa. That started when a Black man who was a veteran shot his gun in the air. Right. So you have to understand, this violence, this fear, this insane fascination with guns is closely related to the fear of a Black nation. I think Public Enemy said that one time, and then that was one of my favorite Black gun advocates. His name was Robert F Williams. Now, Robert Williams, he was from North Carolina. And, you know, you probably have heard about his guns. His book, Negroes with Guns, that he wrote because he was a veteran. He was a marine, and he was a staunch advocate for armed self-defense. And Robert F Williams would do stuff like like one time he had this shootout with the KKK, like the KKK in Monroe, North Carolina, which is right outside of Charlotte. They would terrorize Black people. Robert F Williams was like, Nah, not anymore. He came home. He put barricades and sandbags around the NAACP leader’s house. And when the KKK got this permit to literally go around and fire at Black people’s homes, his people was there behind those sandbags and they fired back.

Michael Harriot [00:07:40] Right. And Robert F Williams was one of the most noted advocates for Black gun ownership. And people who, like even Martin Luther King, respected him. Martin Luther King wrote a forward to Negroes with Guns because he said like, I don’t understand why Robert Williams likes guns so much, but I respect him. Right. Like when we think of the nonviolent civil rights movement, we can’t forget, one, that it was not really nonviolent. Like the white people committed a lot of violence ask Medgar Evers and Martin Luther King and all the people that March for civil rights. But one of the things that we forget is when white people weren’t violent, it was because of people like Robert F. Williams and the deacons for defense who were protecting those marchers. Right. It was people like in Birmingham, Alabama, when the Freedom Riders came through Birmingham, Alabama. You know, the the county commissioner, the police commissioner for the city of Birmingham, he had made this deal with the KKK, like he was going to give them 15 minutes alone with the Freedom Riders. And they were just waiting for the freedom riots and they had bricks and bats. But when they attacked them in Anniston, the people in Anniston, they called his dude from Birmingham, and they say they are out here doing this jump again. And so these riders, these Black men came from Birmingham, Alabama, and they brought their guns and they protected them. So we forget that armed self-defense was always a part of the civil rights movement, and we can call it nonviolent. But we were always adamant about protecting ourselves.

Michael Harriot [00:09:25] And so this was part of the fear that drove white people to owning guns. And that’s why it’s so prevalent in the South. Right. Like in in Lowndes County, Alabama. Right. When the people came there to register. Lowndes County was 80% Black. Right. But they had less than 10% Black voter registration. And so when the group of civil rights activists came there to register people to vote, one of their leaders, Stokely Carmichael, noticed that all the Black people there carry guns because they called them Bloody Lowndes County, because they had lynched so many people. And Stokely Carmichael took that as a signal like armed self-defense is really, really. It works, right? It’s it’s really prevalent in the South.

Michael Harriot [00:10:24] If you like what you heard, please give us a five star review. Download theGrio app, subscribe to the show and share it with everyone you know. Please email all questions, suggestions and compliments to podcasts at theGrio dot com.

Dr. Christina Greer [00:10:46] You’re watching The Blackest Questions podcast with Christina Greer and this podcast. We ask our guests five of the Blackest questions so we can learn a little bit more about them and have some fun while we’re doing it.

Dr. Christina Greer [00:11:00] We’re also going to learn a lot about Black history, past and present.

Dr. Christina Greer [00:11:07] So here’s how it works. We have five rounds of questions about Black history, the whole diaspora, current events, you name it. With each round, the questions get a little tougher.

Dr. Christina Greer [00:11:23] Subscribe to the show wherever you listen to your podcast and share it with everyone you know.