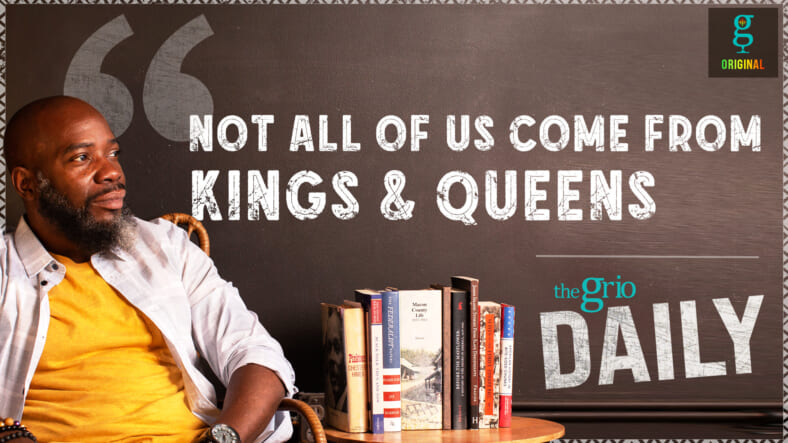 “Not all of us come from kings or queens.” We’re talking about “Griots,” a class of people trained to keep our history and tell our stories. Michael Harriot takes us on a journey explaining where Griots first started and how they’ve trickled down through history. It’s deeper than you think, Kings and Queens.

Hello and welcome back to TheGrio Daily. The only podcast that knows the black equivalent of Once Upon a Time is, Aight so Boom. And I’m Michael Harriot. I’ll be here every day for about 10, 15 minutes to let you know what’s going on in your village. Think of me as your personal Griot. And speaking of Griot, all right, so boom, today, that’s what we’re going to be talking about. The Griot. No, not this platform, not the one owned by billionaire Byron Allen. I mean, that’s my boss. Y’all really think I’m crazy enough to just, like, do a whole podcast talking about my boss? No, I might say something wrong, and I need this job. No, we’re going to be talking about that African oral tradition.

[00:00:47] I’m Michael. Harriot, world-famous wypipologist. And this is TheGrio Daily. You know how like some people say they come from kings and queens? Well, well, not me. I got come from people who the kings and queens hated. Some people say they come from royalty. Some come from warriors. Me, I come from a long line of shit starters. Apple cart upsetters, you know, the people who went around whispering, we should overthrow the king and the queen. For real. Yeah, we should. That’s who I come from.

And griots were like that in West Africa and the West African tradition, there was a separate class of people who were basically the caretakers of the truth. So people call it a Griot. Some societies called it a jolly or a jelly or, you know, it spelled a bunch of different ways. But it literally means blood. And some people call it the Grio. It’s kind of like how this platform spells its name, but with a T and it’s not a griot, it’s not Griot. Right? Lastly, that’s what happened in the Carter homes with, you know G-Money and “New Jack City” took over. Right.

Griot means different things in different communities or different societies in West Africa. Right. Sometimes some people describe a Griot as a storyteller, some like just a songwriter or like a troubadour. Some people say that they are poets. Some say that they are like historians or the keeper of the oral tradition. Some people say like praise worshippers. Some say they’re journalists or artists. But the truth is like they are all of that combined in one, right? The history of a society is combined in its art and in its journalism and in its truth-tellers. There couldn’t be an emperor or a king without a Grio in some African societies, but we kind of kept it going when we got here in America. And it wasn’t just something like you could become like you don’t just, like, apply for a real job or run for griot office. You had to be born into a class of Griots and raised as a Griot. And so, you know how like, say you send somebody a text message, right? And they misinterpret it like, hey, why you sent me that text message? Like grilling me on what I was doing. And he was like, Nah, I was just asking what he was up to. Like, What are you doing? So you can misinterpret that in text or in writing. But when you hear someone who is trained to communicate through the oral tradition for their entire lives, there won’t be any mistake.

If you like what you heard, please give us a five star review. Download the Grio app. Subscribe to this show and share it with everyone you know. Please email all questions, suggestions and compliments to podcasts at the Grio dot com.

You are now listening to the Grio Black Podcast Network. Black Culture Amplified. What’s going on, everybody? Panama Jackson here. And I’m the host of the Dear Culture podcast on the Grio Black Podcast Network. And I’m telling you to check us out every Thursday on the Grio app to make sure you get that new, amazing, original black content, that awesome creativity. Check us out. Dear Culture, Panama Jackson Out.