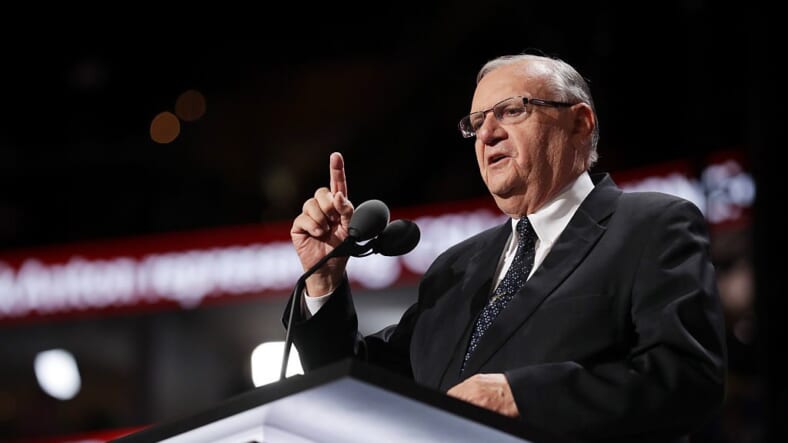 Former sheriff Joe Arpaio (and pardoned felon for those keeping track) who is now running for Jeff Flake‘s soon-to-be vacated republican Senate seat, is bringing back the “birther” conspiracy.

Arpaio told WABC radio hosts Rita Cosby and Curtis Sliwa that he had proof former president Barack Obama wasn’t born in the United States. That proof, he said, should be more important than the Russia investigation.

“They’re (Congress) too busy talking about Russia,”Sheriff Joe Arpaio insisted, adding, “We came up with some more, new information, not that we need it, but you’ll hear more about it.”

Arpaio also insisted that he didn’t care if there was pushback from his positions.

“I’m not gonna back down on this. I don’t care if I lose elections or anything,” said Arpaio. “I’m going to tell you again that that document is a forgery.”

The 85-year-old went on to say that he would introduce legislation to make presidential candidates prove their citizenship if he does end up going to the Senate.

Sherriff Joe Arpaio, who was pardoned by President Donald Trump last year despite being convicted of contempt of court for ignoring orders to stop racially profiling Latino drivers, is already drawing plenty of attention to Arizona.

Arpaio, in an interview with the Washington Examiner, said that his age and his unpopularity with nonwhite voters didn’t necessarily mean that he couldn’t win the race.

“I have a lot to offer. I’m a big supporter of President Trump,” Arpaio said. “I’m going to have to work hard; you don’t take anything for granted. But I would not being doing this if I thought that I could not win. I’m not here to get my name in the paper, I get that everyday, anyway.”

He pushed back against accusations of racism but admitted that he knew it would come up in the race.

“My mother and father came here from Italy, legally of course. I have a soft spot for the Mexican community having lived there,” he said. “I’m not going to get into my personal life, but I will say we have four grandkids and some have a different ethnic and racial background. I don’t say that. I don’t use my grandkids. So, I have a soft spot, but still, I’m going to do my job. You have to do it.”

And Sherriff Joe Arpaio also believes being elected to the senate will allow him push his agenda targeting immigrant communities even further.

“Being a U.S. senator is a little different than being the sheriff, because you can do a lot of things in the U.S. Senate, and I have many plans, believe me. It’s tough. It’s a tough decision. But, if you’re going to come across that border, you should be arrested and get the consequences of it.”