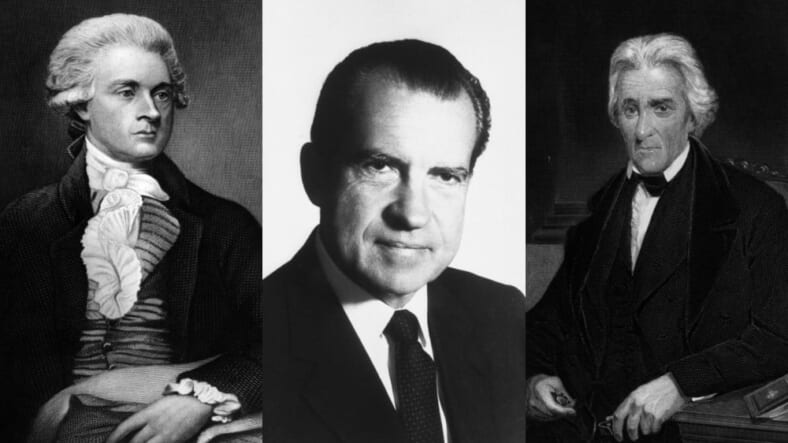 Some have called Donald Trump the most racist U.S. president in modern times, if not the most racist president ever, for his crude and highly offensive comments calling Haiti and African nations “shithole countries.”

However, Trump does not stand alone. As dangerous and violent as his words are today, they are but a throwback to what other commanders-in-chief have said and done during darker times–when America was “great,” according to Trump.

It makes sense to start off with the first U.S. president, the father of the country, George Washington—who owned over 300 slaves when he died. Washington ordered his overseer Anthony Whitting to keep a slave named Gunner working hard and “continue throwing up brick earth.” Gunner was 83.

And when Whitting whipped a slave named Charlotte, Washington approved. “Your treatment of Charlotte was very proper,” Washington wrote, “and if she or any other of the servants will not do their duty by fair means, or are impertinent, correction (as the only alternative) must be administered.”

When Washington was president living in the Executive Mansion in Philadelphia, he evaded a Pennsylvania law freeing any slave who lived in the state for over six months. The father of this country sent his human property back down to Mount Vernon whenever the six months were about to expire. A few of Washington’s slaves escaped, including his cook Hercules, who ran away on Washignton’s birthday.

Third president Thomas Jefferson owned as many as 140 slaves. Jefferson spent years raping his slave Sally Hemings—his wife’s half-sister—since she was a child. Hemmings bore six children. And this man enslaved his own kids. Jefferson said the “unfortunate difference of color” of Black people made them less beautiful than whites.

Andrew Jackson–Trump’s hero– was one of the worst American presidents, and also one of its most racist. He owned hundreds of slaves, and censored anti-slavery mailings from Northern abolitionists while president. Nicknamed “Indian killer,” he committed genocide against of Native Americans, including women and children. His Indian Removal Act removed 46,000 native people from their land, making 25 million acres available to white settlers and slaveowners, while 4,000 Cherokee people died during the “Trail of Tears” forced relocation to the West.

Abraham Lincoln (1809 – 1865), the 16th President of the United States of America. (Photo by Alexander Gardner/Getty Images)

The great emancipator, Abraham Lincoln was a racist as well. During a debate in his run for Senate in 1858, Lincoln said “There is a physical difference between the white and black races which I believe will forever forbid the two races living together on terms of social and political equality.” And in 1862, he tried to convince Black folks that they should self-deport and colonize in Central America, telling them it would be “extremely selfish” not to do it.

With a deep hatred of Black people, Andrew Johnson believed America should have a white man’s government. He blamed “the radical Congress” after the slaughter of Black activists by white police officers in New Orleans. Johnson opposed the 14th Amendment, and vetoed the Civil Rights Act of 1866 granting equal protection to all citizens, as he doubted it was “sound policy to make our entire colored population” U.S. citizens.

Meanwhile, Johnson also issued pardons to wealthy Confederate traitors, and gave his blessing to the Southern states to issue the “black codes” reinstituting slavery by another name. He also spoke of the need to relocate “warlike” Indians to reservations.

Vice President Mike Pence once compared Trump to Teddy Roosevelt, who called white Americans “the forward race” and minorities “the backward race.” Regarding  Native Americans, he said “I don’t go so far as to think that the only good Indians are dead Indians, but I believe nine out of ten are, and I shouldn’t like to inquire too closely into the case of the tenth.”

Woodrow Wilson was a racist, even by the extremely racist standards of his day. This president resegregated the federal government, and when a group of Black professionals led by journalist Monoroe Troter met with him to protest the policy, he told them, “Segregation is not humiliating, but a benefit, and ought to be so regarded by you gentlemen.”

Wilson screened D.W. Griffith’s film The Birth of a Nation, which glamorized the Ku Klux Klan as saviors of the white South–in the White House. The film even quoted the president: “The white men of the South were aroused by the mere instinct of self-preservation to rid themselves, by fair means or foul, of the intolerable burden of governments sustained by the votes of ignorant negroes and conducted in the interest of adventurers.”

Wilson, who was against civil rights for Black people, said the film could “teach history with lightning,” and opposed Reconstruction because “the dominance of an ignorant and inferior race was justly dreaded.”

Calvin Coolidge, responsible for the racist Immigration Act of 1924 that restricted nonwhite people into the country, said “America must be kept American. For this purpose, it is necessary to continue a policy of restricted immigration.”

The 32nd president, Franklin Delano Roosevelt, rounded up more than 100,000 Japanese-Americans during World War Two and locked them up in prison camps, while sparing Italian- and German-Americans the same fate.

Despite the important pieces of civil rights legislation he signed, Lyndon B. Johnson was racist, to be sure. When he nominated Thurgood Marshall to the U.S. Supreme Court rather than a less-well known African-American judge, he explained, “when I appoint a nigger to the bench, I want everybody to know he’s a nigger.”

Johnson once asked his chauffeur Parker if he preferred to be called by his name rather than “boy,” “nigger” or “chief.” When Parker said yes, Johnson angrily said, “As long as you are black, and you’re gonna be black till the day you die, no one’s gonna call you by your goddamn name. So no matter what you are called, nigger, you just let it roll off your back like water, and you’ll make it. Just pretend you’re a goddamn piece of furniture.” He called civil rights legislation “the nigger bill.”

Richard Nixon was racist and anti-Semitic. The “law and order” president waged a war on drugs against Black people and the antiwar left, and used a Southern Strategy in his 1968 campaign to appeal to white Southerners’ resentment over civil rights.

“Do you know, maybe one black country that’s well run?,” Nixon told Henry Kissinger on the phone from the Oval Office, speaking about Jamaica. “Blacks can’t run it. Nowhere, and they won’t be able to for a hundred years, and maybe not for a thousand.” Of the Jewish community, Nixon said, “The Jews are just a very aggressive and abrasive and obnoxious personality.”

Ronald Reagan brought us the racist stereotype of the “welfare queen,” who is presumably a Black woman. “There’s a woman in Chicago. She has 80 names, 30 addresses, 12 Social Security cards and is collecting veterans’ benefits on four nonexistent deceased husbands. She’s got Medicaid, is getting food stamps and welfare under each of her names. Her tax-free cash income alone is over $150,000.” 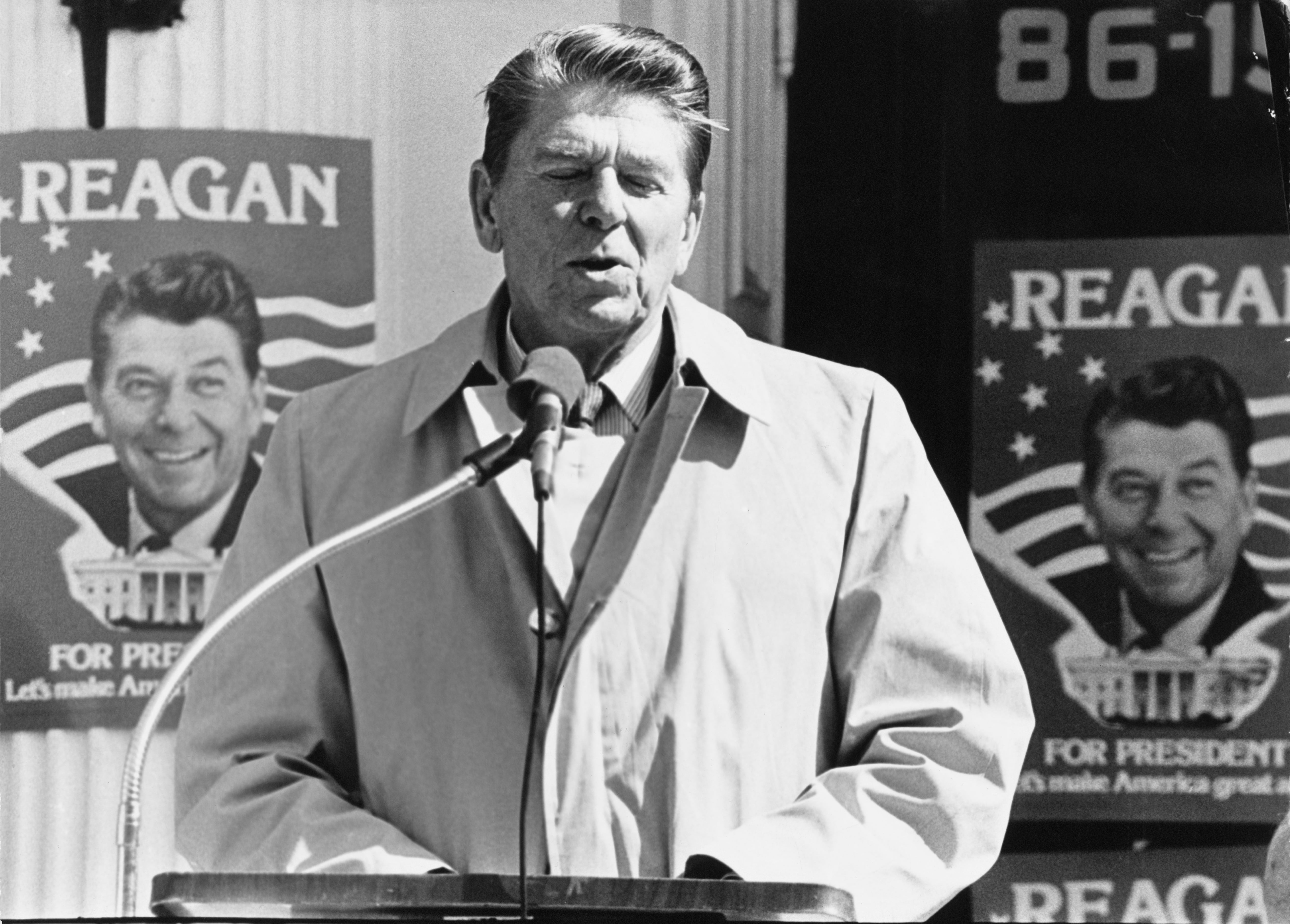 Former Governor of California Ronald Reagan (1911 – 2004) making a speech during the Republican presidential primary in New York, March 1980. Reagan won the New York primary and was later selected as the Republican nominee, before being elected President in 1981. (Photo by Keystone/Hulton Archive/Getty Images)

In 1980, Reagan chose to launch his campaign in Philadelphia, Mississippi—where three civil rights workers were murdered in 1964–and proclaim his support for “states’ rights.”

President George H.W. Bush was known for the infamous Willie Horton campaign ad in his 1988 bid against Michael Dukakis. The ad depicted Horton, a Black convict who was released from prison under a weekend furlough program while Dukakis was governor of Massachusetts, and committed armed robbery and rape. Invoking an image of Black criminals who rape and murder white women, and tapping into a visceral white fear of Black men, the ad helped send Bush to the White House.

Although some jokingly called him the “first Black president,” Bill Clinton built a career off the backs of Black folk. When he was governor of Arkansas and running for president in 1992, he went back home to preside over the execution of a mentally disabled man named Ricky Ray Rector—just to look tough on crime.

He enacted welfare reform based on myths of Black laziness, and through his 1994 crime bill, Clinton presided over the mass incarceration of Black people.

George W. Bush called himself a compassionate conservative, but as Kanye West said, “Bush doesn’t care about Black people.” The government neglect and inaction in the aftermath of Hurricane Katrina devastated Black lives in New Orleans, prompting Bush to tell his FEMA director that “Brownie” was doing a “heckuva job,” and Bush’s mother Barbara to say things were “working very well” for the evacuees and they were better off because they “were underprivileged anyway.”

Now, that’s a lot of racism. Although Trump has indeed earned his white supremacist credentials, there is a lot of racism to go around throughout American presidential history. We must understand the context for his offensive comments and understand this is nothing new.