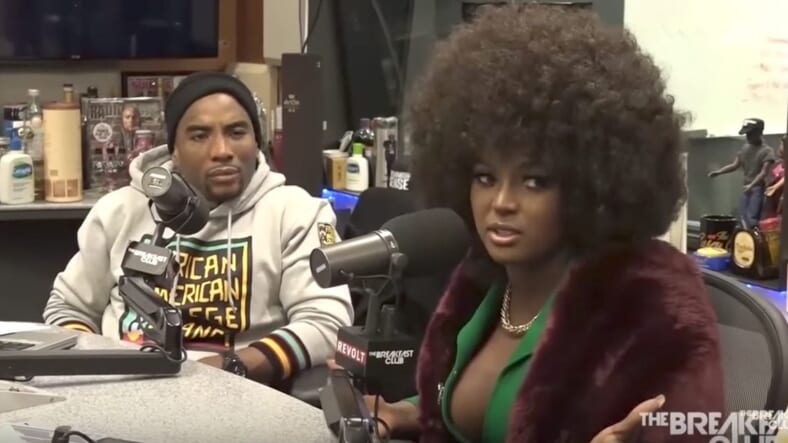 Let’s be real clear about what The Breakfast Club’s Charlamagne Tha God and DJ Envy were doing when they recently challenged Love & Hip Hop’s Amara La Negra about how colorism affects Afro-Latinas.

They were gaslighting her, or in other words, playing Amara for crazy.

‘Gaslighting’ is a term used in the 1944 classic film where a husband (Charles Boyer) kept messing with the lights to make this wife (Ingrid Bergman) lose her sanity. But if you want to dress it up so we, or at least The Breakfast Club, can keep up, they were invalidating her Blackness to fetishize her Latin roots.

“If you ignore my blackness, I become more ‘other’ and sexy,” says Michaela Machicote, an Afro-Latina who grew up near Chicago’s Puerto Rican heart, Humboldt Park, and who wrote her University of Texas at Austin master’s thesis on Blackness and identity in Puerto Rico.

Wow, the whole time while Amara La Negra was trying to explain how difficult it is being a darkskinned black Latina in the music industry, Charlamagne and Envy tried to invalidate her struggles. pic.twitter.com/FmqTQRay6o

Ignoring the lived experiences of Black women has consequences beyond a day’s worth of Twitter clapbacks. And looking La Negra in the face and telling her what she experiences as a dark-skinned Black woman is awfully tone deaf in a cultural moment where #MeToo and the Hollywood Time’s Up campaign is all about listening to women and taking what they have to say to heart.

“It’s a combination of misogynoir [hatred of black women] and entitlement men have in speaking over women,” Machicote also says. “We all understand how black women are ignored, erased and invisibilized.”

La Negra, in her eloquent responses, was having none of it, and neither are Black women, Machicote said: “Black women are starting to have this feeling of we’re tired of you talking over us, invalidating our struggle and fighting for you, and you don’t fight for us. We’re not going to be silenced. We put all the effort in the struggle, so why are we doing this for you if you can’t even treat us the way we deserve to be treated after all we’ve done?”

Regressive attitudes dressed up as provocative questioning has social, cultural and economic consequences. If that’s not simple enough: Dark-skinned women must deal with the anxiety of not being perceived as being beautiful and therefore loveable, which can inform our ability to develop healthy relationships.

And if European beauty standards, such as the need for straight hair to appear “polished” and light-skinned to be accepted, vexes all kinds of women, think of how this affects Black women on the darker end of the color continuum. That La Negra felt compelled to deconstruct her ‘fro and her Afro-Latina status proves the point.

Everything that holds Black women back in society, such as lack of career mobility or sponsorship to reach higher ranks at work or proven medical neglect in pregnancy and childbirth, has implications: For many dark-skinned Black women, there’s often the lingering question of whether the depth of our skin tone plays a role in social and workplace interactions. This line of thinking can be rooted in childhood, when families make a value distinction between Black children based on lightness of skin or neighborhood kids make it into a thing.

Just when it seems like colorism is buried in the past, women like La Negra or Dascha Polanco, a light-skinned Dominican of Orange Is the New Black fame, are asked to validate their existence.

For about a three-month period, the kids in my middle-class Detroit neighborhood called me “black wizard” and made a chant out of it with dance steps. A group of siblings all above the historic paper-bag brown color spectrum walked down to my house one afternoon and “performed” it in my driveway. I was mortified and embarrassed. I was 11, and my spirit died a little bit that day.

While I’m sure dark-skinned Black women make sure they find ways to survive and thrive, many more likely have a similar story to tell. And those stories don’t invalidate the other part of the conversation where light-skinned Black women are denigrated, too. Because this whole disaggregation of ethnicity, and race and skin tone is part of same stale conversation designed to either erase or split us apart.

Moreover, being Black and Latina isn’t mutually exclusive, even though some folks try so hard to make it so, Machicote says. But for men there’s something to be gained by redefining Afro-Latinas by what they are not to craft an image of beauty and desirability that fetishizes women.

The whole silly, regressive conversation started off on the wrong foot when Charlamagne and Envy initiated a discussion about “what” La Negra is. She patiently described the experience of being a dark-skinned, coily haired Latina and the dearth of opportunities for people who look like her in entertainment. Charlamagne and Envy erased La Negra’s experience by suggesting she’s wrong about colorism in the Latino community because they don’t “see it.”

And perhaps to be provocative, Charlamagne asked, “You sure it’s not in your mind?” totally ignoring the light-skinned privilege entertainers like Cardi B enjoy, as remarkable and adorable as her rachtet-to-riches story may be.

The power of narrative is critical at this juncture. The culture war over so-called shithole countries, kicking Dreamers out of the only country they’ve ever called home and having a president who gaslights us daily by delegitimizing the free press, proves how powerful story is.

Stories are the beginning of everything, who we are, how we are and why we are. In objectifying Afro-Latinas and disrespecting them by failing to listen, The Breakfast Club is just a part of a bigger trend of dehumanizing Black women.

Not only do men in Hollywood and Corporate America have to do better, Black workaday men aren’t off the hook, either. Charlamagne pulled the curtain back on a way of thinking that’s endemic to pockets of Black society and certainly rap.

Thankfully Laz Alonzo reached out to his boy with a word on the lingering, harmful effects of colonialism, suggesting Charlamagne was open to the knowledge. What I know for sure is there’s only so much #blackgirlmagic to go around.

Being seen, heard and validated in the fullness of who we are is what we need now, so stop playing with the damn lights.

Deborah Douglas is a Chicago-based journalist who teaches journalism at Northwestern University.