Stacey Evans's bid to be the Democratic nominee may be over before it started. 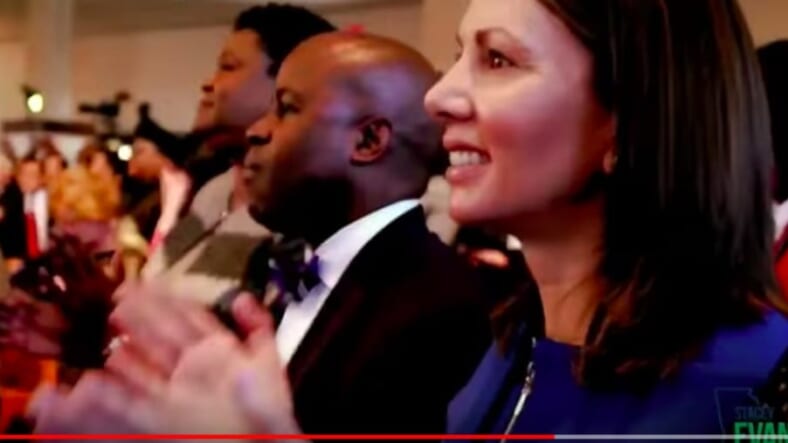 The political ad for Stacey Evans‘ bid to be the Democratic nominee in the Georgia‘s gubernatorial race hit the airwaves just in time for the weekend of the Martin Luther King, Jr. holiday.

The ad starts off just as you would expect. Evans, a white woman running for office in a state with a large Black voting population, is attending Sunday service at a Black church, seemingly pandering to its religious Black, Democratic congregants—a base she so desperately needs to hold close. But, Evans one ups the usual political theater by not just going to any historic Black church, but arguably THEE most historic Black church in the nation.

Evans and her production crew filmed the ad in the Ebenezer Baptist Church, the church home of Dr. King. In the video, she is seen interacting with church goers, clapping (probably off beat) to the choir’s selections, listening intently to the preacher, and of course bowing her head in prayer as she holds hands with her fellow parishioners.

It’s all from the playbook of Political Pandering 101. Then comes the surprise ending when a transparent illustration of Dr. King’s face hovers in front of Evans’ face. In effect, this display of digital dishonesty super-imposes Dr. King’s face onto Evans. It’s digital MLK blackface.

It’s weird, awkward, and thankfully only lasts a few seconds at the end.

The video has since been removed, but the internet lasts forever, so Evans’s gaffe has not disappeared.

Actually, there’s another Stacey who is vying for the Georgia governorship—Stacey Abrams, a Black woman who, if she wins the primary and general elections, would be the state’s first Black woman governor.

The Root‘s Jason Johnson investigated this story to see if anybody would take ownership of the campaign mis-step. Evans’ Campaign Manager Jeff DiSantis blames the Stacey Abrams camp.

“The Abrams campaign has decided to distort a video made by the campaign’s digital company. As is usual in modern campaigns, they accompany Stacey to events so that the campaign can share our activities with the public… While the Abrams campaign is trying to divide our state, the Evans campaign will continue to seek the vote of every Georgian who wants to bring hope back to Georgia,” DiSantis told The Root.

If no one will take the blame, sounds like maybe Evans has only herself to look to on this one.