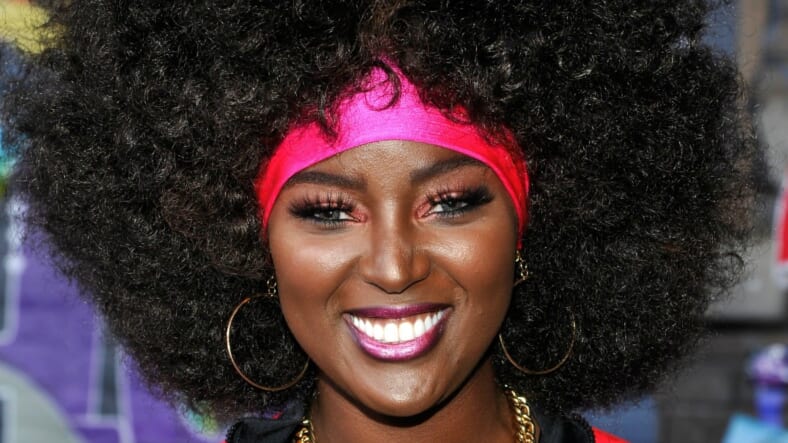 Amara La Negra of Love & Hip Hop Miami fame is black and Latina which is something that too many people don’t seem to be able to understand.

The Miami-born Dominican singer has addressed social media comments that accused her of wearing blackface during a live interview with The Shade Room last Monday. Host Angelica Nwandu asked Amara what she thought about the comments that have been thrown her way and the Afro0Latina, who is proud of her roots said it was important to her to be able to “educate and inform people about Afro-Latinos.”

Then, on Thursday, she brought up the accusations again by posting a cute throwback video of herself in a beauty pageant when she was young writing, “Well Yea I guess I was Born in a ‘Black Face Body!’

“Its funny that I even have to go through this and show you baby pictures or videos to prove to blogs and people on social media that my skin color is not airbrushed or spray tanned nor do I take melanin shots to be black!”

While she might not go around in blackface, there has been at least one person imitating her in it. In 2016, former Dominican beauty queen Geisha Montes de Oca was on the variety show “Aquí Se Habla Español” in blackface, an Afro wig and padding that made her butt look bigger.

Amara put the picture of Montes de Oca up on Instagram and asked people, “What did you all think?”

People questioning Amara’s Afro-Latina identity is nothing new. In the very first episode of her reality show she takes on the music producer Young Hollywood about her image.

The producer tells her she needs to be “a little bit more Beyoncé, a little less Macy Gray,” before adding that an Afro is not elegant. He even calls her “Nutella Queen,” says the music scene wants cookie cutter stars and asks her what it even means to be Afro-Latina.

It’s a sad state of affairs that Amara had to school him on the fact “not all Latinas look like J.Lo or Sofía Vergara or Shakira, so where are the women that look like myself?”

She ended up walking out on Young Hollywood that day but that didn’t seem to put a damper on her career as she just signed a multi-album deal with Fast Life Entertainment Worldwide and BMG.