We’re in D.C. and it’s going down tonight for the State of the Union clapback!

President Donald Trump has wrapped his first State of the Union address, ending with a crowd chanting “USA! USA! USA!”

The big headline: America first.  But with his proposed policies, polarizing rhetoric, and lack of compromise, it could also translate to America only.  America alone. And America vs. the world.

The majority of the speech focused on immigration reform (via the MS-13 gang), terrorism (but not white domestic terrorists or gun control) and North Korea as an enemy (not Russia).

The words were about unity, but the feeling was fear.

This is the State of the Union. 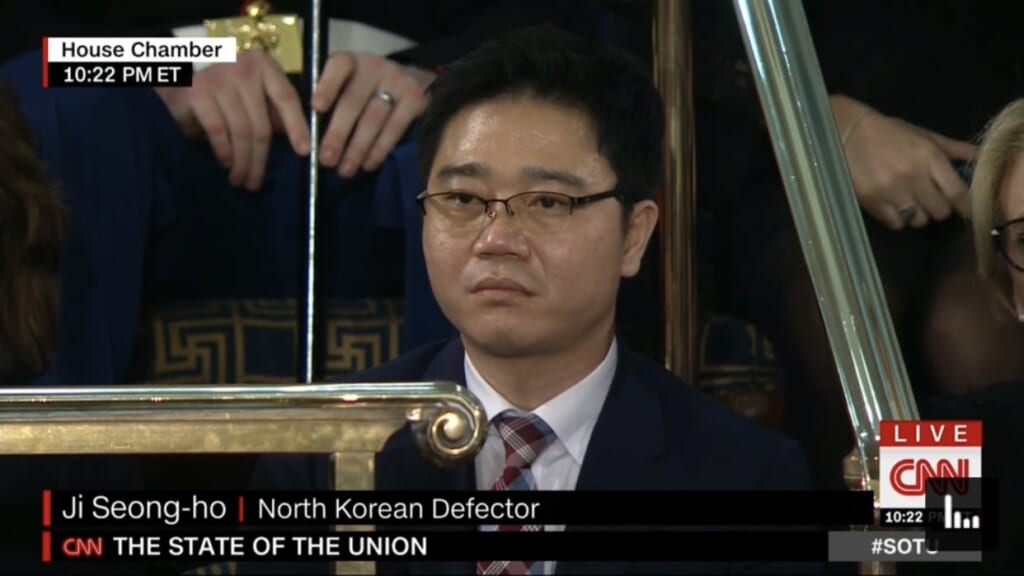 But we have one question: If a determined and perseverant immigrant like Seong-ho ever wanted to come to the U.S. for asylum and a new life, would he be allowed in under a Trump administration?

President Trump will do anything to be the anti-President Obama.  To rousing applause, he announced that he signed an order keep open prison facilities at Guantánamo Bay.  Because terrorism, ISIS and of course protecting America.  Weren’t the atrocities committed at Guantánamo one of the reasons we created new enemies? Just asking for a country…

President Trump is now addressing the opioid crisis- a legitimate problem- which has killed a stunning number of white Americans.  Trump has framed this as a public health issue which must be fixed, bringing out a police officer and former heroin addict who he helped save (she’s a white woman with a baby by the way.)

What a privilege considering most black and brown folks were criminalized for their drug addiction in the past three decades.  Will those Americans- many of whom are still behind bars or in the criminal justice system- get the same compassion?

President Trump is talking merit-based immigration– not mentioning that he called African nations “sh*tholes”– despite the factual success of many black immigrants who come to the United States.

Did anybody else just side-eye when he said “chain migration” should end?  America knows a thing or two about chains.

Speaking of which, Trump is now talking terrorism attacks.  We’re still waiting for him to mention the terrorism in Charlottesville or the Texas church shooting or the Los Vegas concert slaughter, all committed by white Americans… 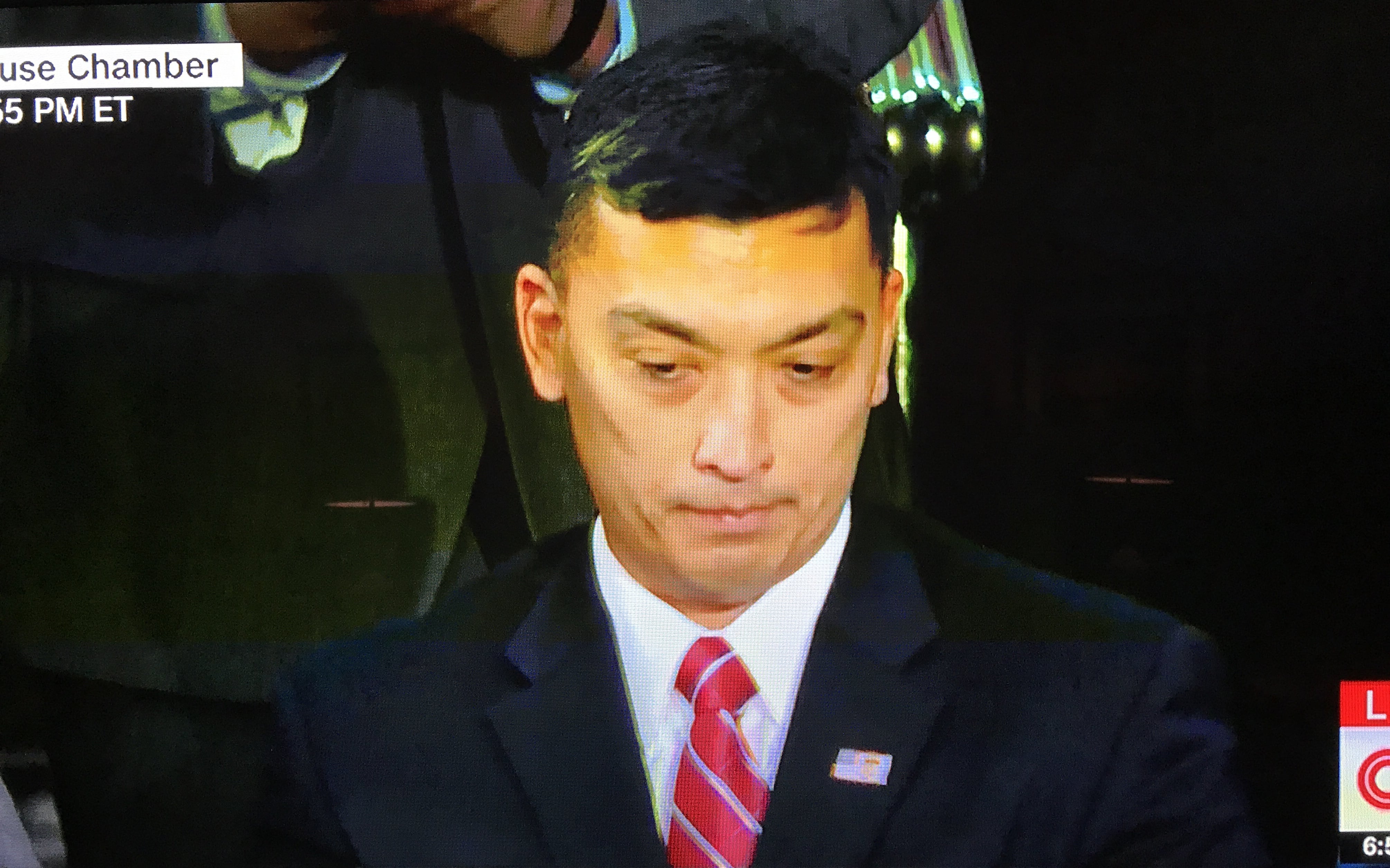 Of course President Trump has brought out another black and brown family to make his point about immigration policy.  He has the parents of two teens killed by the MS-13 gang in Long Island- Kayla Cuevas and Nisa Mickens.

This story will be used to defend using ICE Agents and Border Patrol agents separating families, even though studies show immigrants are less likely to commit crimes.

This is what we call divide and conquer. 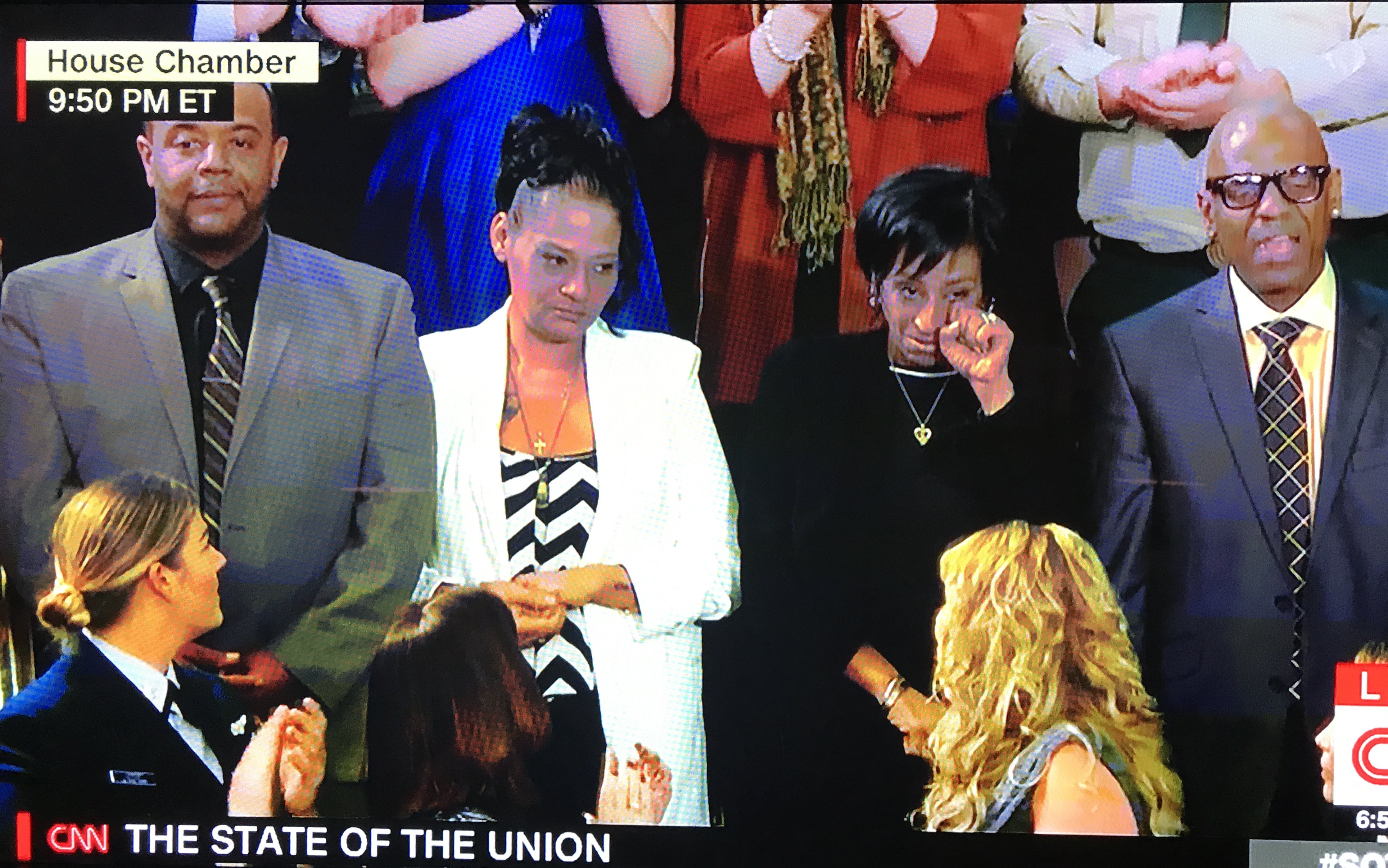 The parents of Kayla Cuevas and Nisa Mickens stand for a round of applause during SOTU.

It seems that President Trump has a new best friend: Corey Adams, a Black welder from Ohio. Trump described him as an “All-American worker,” who will use the “extra money” from Trump’s “tax cuts” to invest in his two daughters’ education. 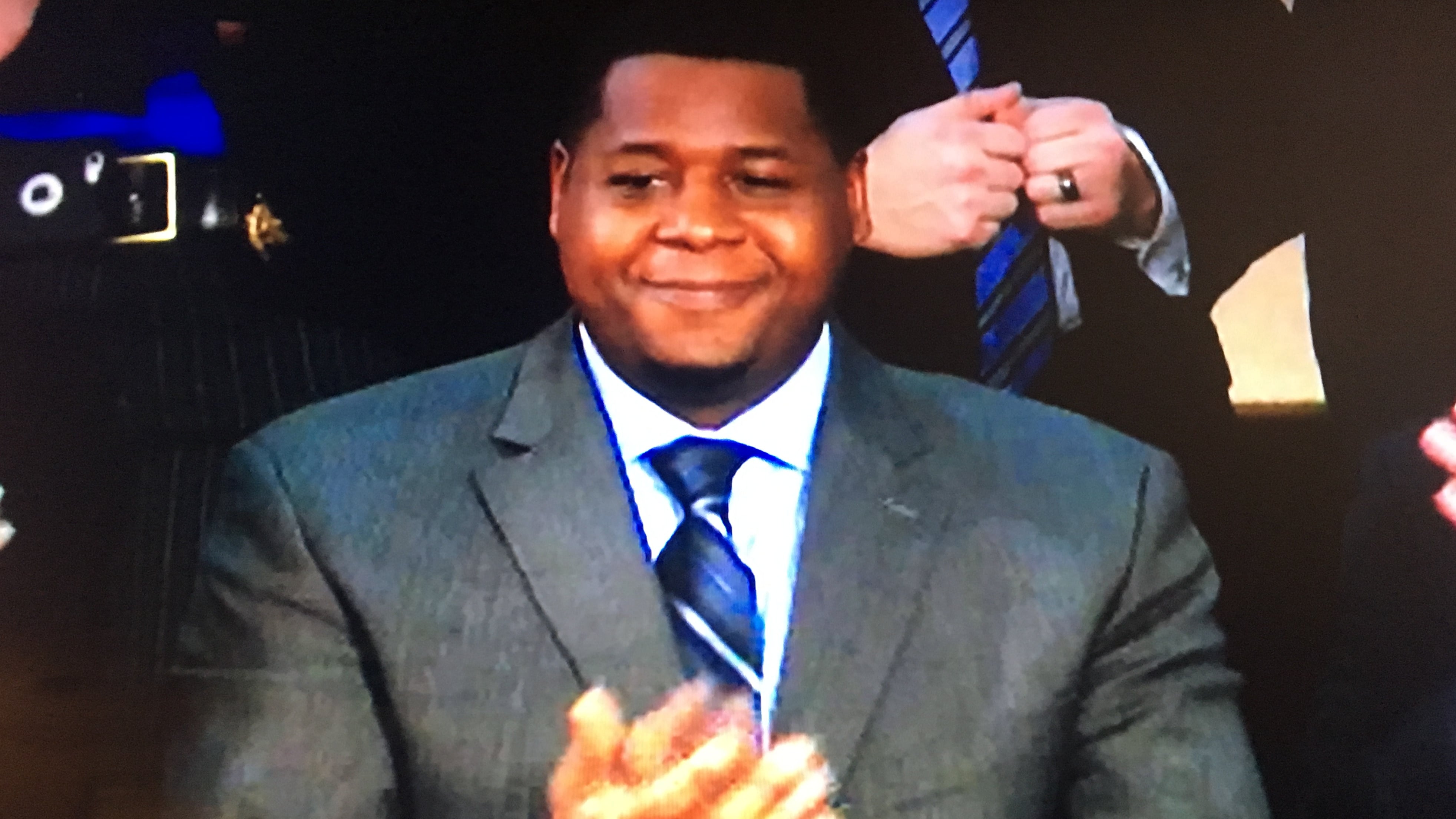 President Trump has also shouted out a little boy who decorated the graves of veterans with 4,000 flags on Veterans Day.  Sweet.  But he used the story to suggest that standing for the national anthem is a mandate:

“Young patriots like Preston teach all of us about our civic duty as Americans. Preston’s reverence for those who have served our Nation reminds us why we salute our flag, why we put our hands on our hearts for the pledge of allegiance, and why we proudly stand for the national anthem.”

Okay sir. Veterans died so we could kneel too.

President Trump has congratulated himself for getting rid of the “cruel ObamaCare.”

“We eliminated an especially cruel tax that fell mostly on Americans making less than $50,000 a year – forcing them to pay tremendous penalties simply because they could not afford government-ordered health plans,” Trump said during his speech. “We repealed the core of disastrous ObamaCare—the individual mandate is now gone.”

Clearly a huge overstatement. Trump’s skewed recant of his recent accomplishments drew applause, even a standing ovation by the Republicans on the House floor.  What wasn’t mentioned- 13 million more people are projected to be uninsured by 2027. 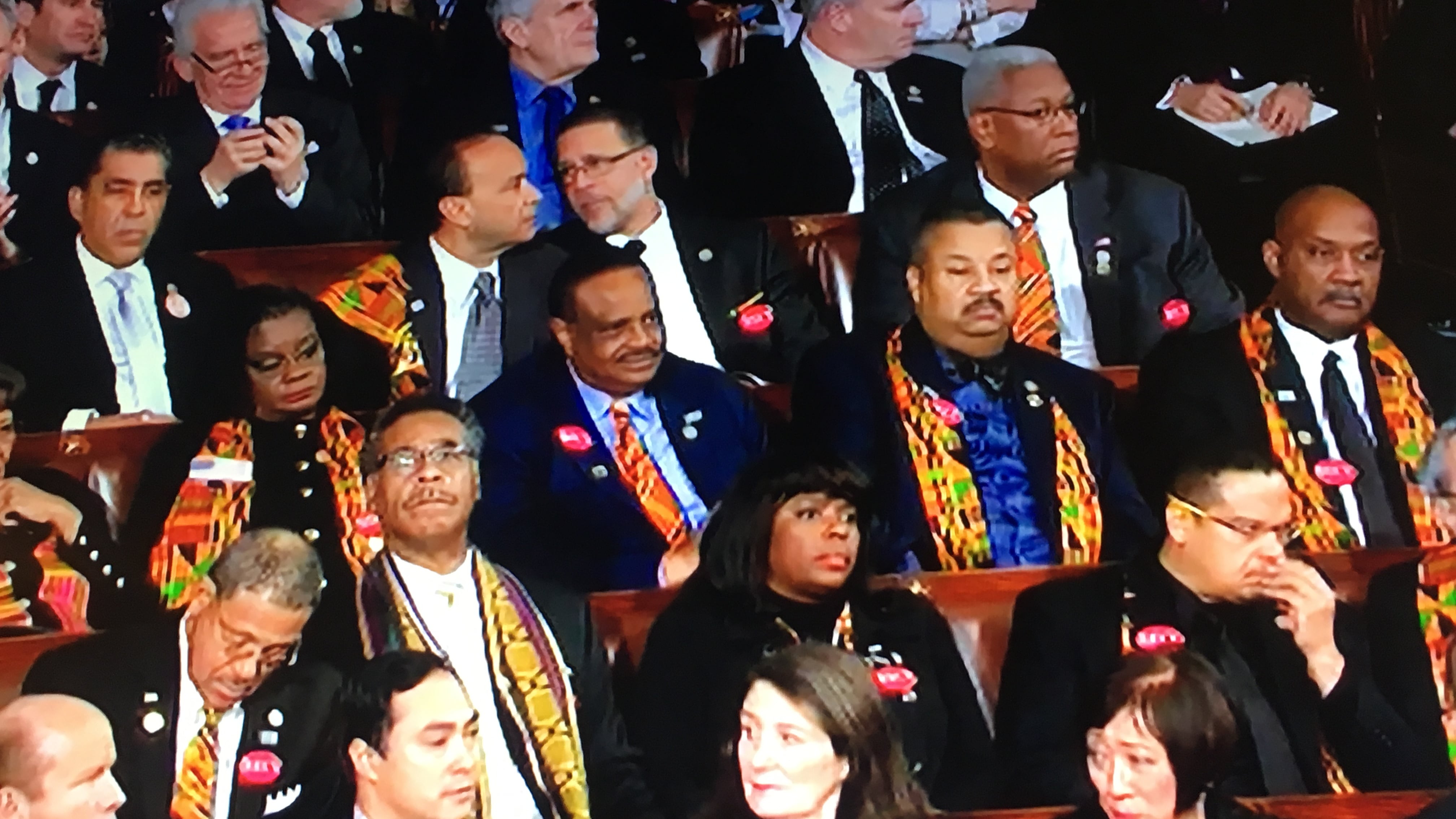 He also declared “Hispanic levels of unemployment” to be the lowest in history. 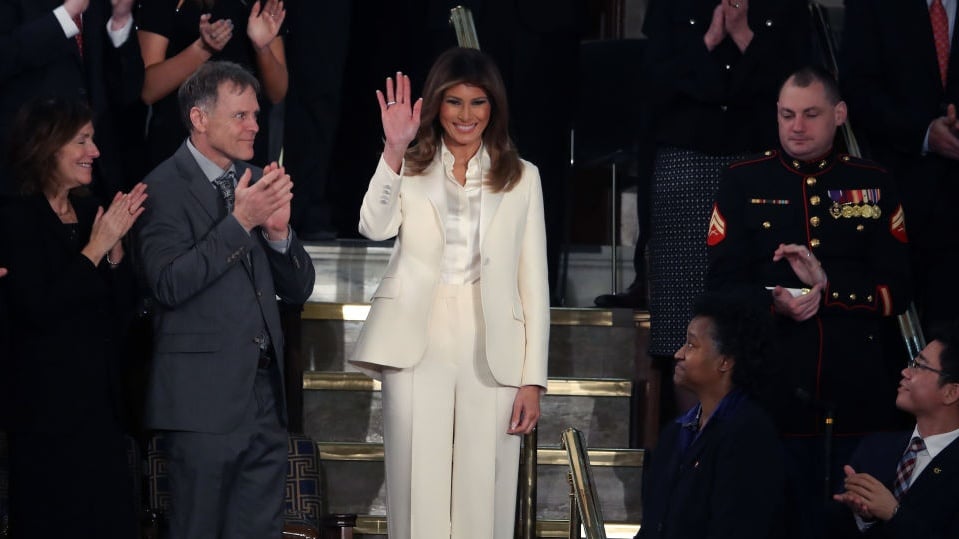 First Lady Melania Trump arrives for the State of the Union address in the chamber of the U.S. House of Representatives wearing all white. This is in stark contrast to a number of Democratic women in Congress who purposely wore black tonight in support of the #MeToo movement. Of all people, we would have expected the First Lady to understand what this movement has meant to so many women who have been victims of sexual harassment and sexual assault. #IsntItIronic

Rep. Maxine Waters reveals why members of the Congressional Black Caucus are wearing kente cloths during Trump’s State of the Union tonight.  We ran into Rep. Waters and asked her what the inspiration was for the movement:

Rep. Sheila Jackson Lee (D-TX) doesn’t think tonight’s state of the union is about Trump. She says it’s more about the growing opposition to his administration:

“Today is not a day for the president unfortunately, it is in spite of him.” 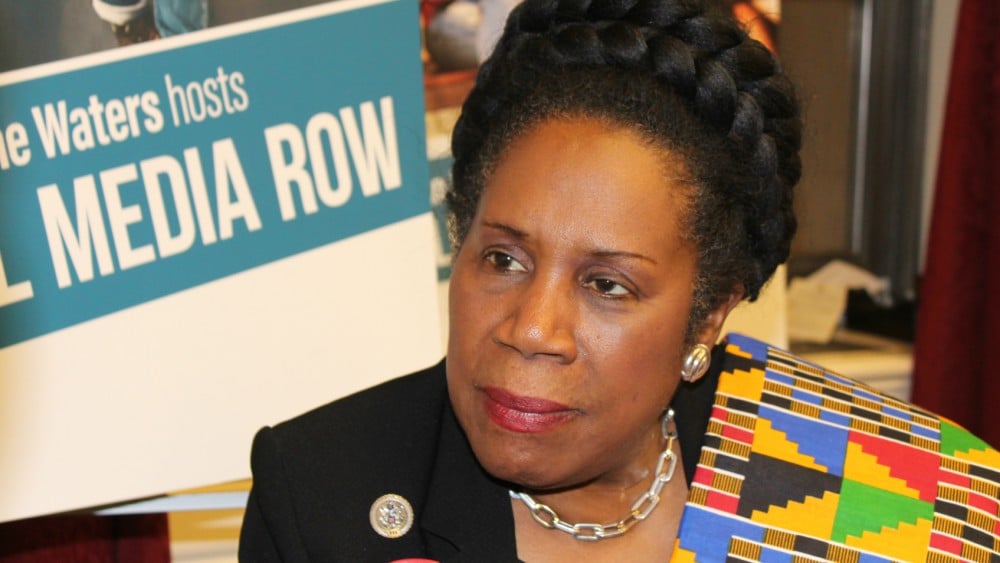 “Many African American women have suffered sexual assault because of the disparities in treatment. Because of our own desires to protect our men, our voices have not been as loud.  But, I appreciate the women of all colors who finally have broken through [even though] there will be someone standing there tonight who has  [allegedly harassed] 16 women who have yet to be heard.”

We caught up with Congresswoman Barbara Lee (D-CA) to find out why she decided to boycott tonight’s State of the Union speech and what she plans on doing instead of listening to President Trump.

TheGrio: You’re wearing a Kente cloth around your neck and a “Recy” pin. Why are these statements important tonight?

Rep: Barbara Lee (D-CA): It’s important especially for me as an African American woman for us to stand in solidarity with women from all around the country who have had the courage to come forward and talk about sexual assault and sexual harassment. These are issues we know all too well as Black women. It’s important that members of Congress understand or at least communicate their understanding of the #MeToo movement.

Recy Taylor’s spirit is with us today. She was raped by six white men who were never brought to justice. I am glad that the state of Alabama offered an apology, but I am honoring Recy and thanking her today, hoping there won’t ever be another Recy to have to go through something like this.

TheGrio: Why have you chosen to boycott tonight’s State of the Union speech and what message do you hope this sends?

Rep: Barbara Lee (D-CA): Members of the Black Caucus are wearing Kente tonight to represent the continent of my ancestors and those from Haiti where the President referred to as s-hole countries with his racist and despicable comments. It only shows you his disrespect. I have attended every State of the Union since 1988, even when George Bush was elected, who I did not agree with on anything. I went because I respect the office of the President. This President does not respect the office—he dishonors it. I can’t sit there and normalize how he has undermined our democracy or what he is doing now by impeding the Russia investigation. Quite frankly it’s un-American. Sitting there is condoning that and I’d rather be with young people, talking about the next phase of the resistance. How are we going to move forward and how we plan to win elections in November.

“This president takes credit for everything,” the congresswoman told theGrio.com’s Deputy Editor Natasha S. Alford. “He brags a lot. He has no shame.”

Congresswoman Waters was not finished.

“It didn’t just start coming down,” Waters said of the unemployment figure. “It started coming down under President Obama.”

President Trump will reportedly make a pitch for “national unity” in his SOTU speech tonight. But Waters wants to make clear to everyone: She still says Trump is a “racist.”

“Without a doubt a racist,” Waters told Alford. “If you just take a look at Charlottesville where he defended the white supremacists and the KKK and those who were out there basically demonstrating their racism – he said that there was wrong on both sides, etc. etc. And he’s done more than that. He comes from a history of racism. Yes, he is a racist.”

Rep. Terri Sewell sat with theGrio and brought through the granddaughter and great-granddaughter of Recy Taylor, whose story was told by Oprah Winfrey at the Golden Globes.

“I think it’s really important that we as black women have a voice in this MeToo movement as well, as what a better legacy to promote than the legacy of Recy Taylor,” says Rep. Sewell. ”

This is a woman who in 1944 was brutally raped by six men and never got justice, recently died at 98 years old and still had the dignity and self worth to raise wonderful women.”

“I know my grandmother’s smiling down and she’s proud,” said Aisha Walker.

WOW! That was insane.  We just did back-to-back interviews at the #SOTUClapback with protesting representatives and the energy was incredible.

We talked with everyone from Rep. Maxine Waters to Congresswoman Barbara Lee who is boycotting the entire SOTU.
Things to Watch: Look out in the audience for special guests brought by Congressmen and Congressman, which include Recy Taylor’s granddaughter and great-grandaughter.
You’ll also see black Congressmen and Congresswoman dressed in all black wearing kente cloths– a protest to President Donald Trump’s racist “sh*thole” comments directed at African countries.
They didn’t come to play tonight.  Check back for more updates soon!

We’re in D.C. and it’s going down tonight for the State of the Union clapback! Congresswoman Maxine Waters has arrived and she’s wasting no time getting to business.  Dressed in all black, Rep. Waters is hosting the #SOTUclapback to boycott the State of the Union and engage millennials in protest against President Donald Trump.

We’re getting ready to talk with her now, so stand by for updates!