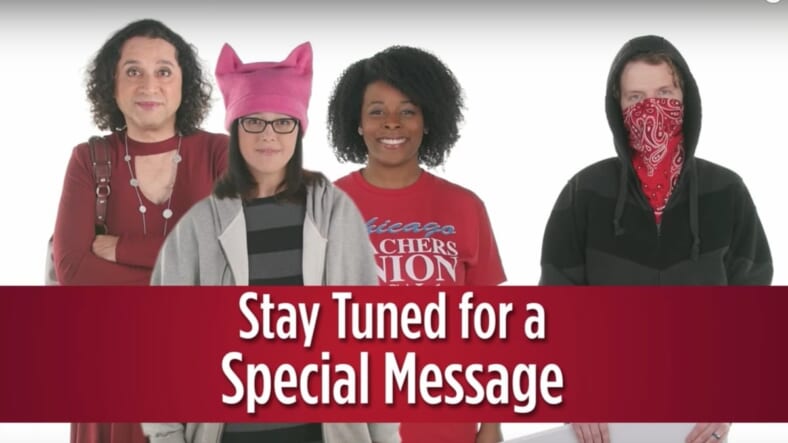 The Republican primary challenger in the gubernatorial race is under fire for releasing an ad that mocks feminists, the transgender community and immigration activists.

State Rep. Jeanne Ives, who is looking to beat Illinois Gov. Bruce Rauner in the Republican primary put the ad out on Saturday and is looking to hit hard at her opponent’s values.

The 30-second ad shows actors dressed to portray a trans woman, an anti-fascist protester, a member of the Chicago Teachers Union and a women’s rights activist. Each of the characters thank Rauner for putting into place policies that support their supposed demographic. The advertisement misrepresents the effects of the policies that Rauner has stood for.

“Thank you for signing legislation that lets me use the girls’ bathroom,” says a transgender woman in a red dress. The issue with this representation is that the House Bill 1785 has no mention of bathroom rights. What the bill does is allow transgender people to change the gender printed on their birth certificates if they have a doctor’s approval.

There is also an actor who is dressed like a hooded activist with their face hidden by a bandana. This person thanks Rauner “for opposing law enforcement and making Illinois a sanctuary state for illegal immigrant criminals.”

This referenced the Illinois Trust Act, which was signed into law by Rauner back in August. It bars local law enforcement from detaining a person based only on their immigration status and limits their cooperation with federal immigration authorities.

Then there is the woman wearing a pink “pussy hat” made famous by the Women’s March. She thanks the governor for “making all Illinois families pay for my abortions,” in reference to House Bill 40. Rauner signed the bill into law in September and it expanded state-funded abortion coverage for women who are on Medicaid.

Both Republicans and Democrats have slammed Ives saying the video is both bigoted and offensive.

Equality Illinois, who is upset over the fact a transgender individual is portrayed in the ad said, “We need a governor who will stand up for all Illinoisans, not someone who will target transgender Illinoisans for their personal political benefit.”

Chairman of the state’s GOP and an ally of Rauner, Tim Schneider, has called on Ives to pull the ad off the air and apologize to the communities she offended with it. He said the “campaign ad does not reflect who we are as the Party of Lincoln and as proud residents of our great and diverse state. She should pull down the ad and immediately apologize to the Illinoisans who were negatively portrayed in a cowardly attempt to stoke political division.”

The Ives campaign has dismissed those comments entirely. “Rauner betrayed Illinois conservatives. He and his paid-for mouthpieces don’t like his betrayals being illustrated and his radical left-wing social agenda being exposed,” Ives’ spokeswoman Kathleen Murphy stated. “Rauner is the one who owes Illinois families in general and conservatives, in particular, an apology.”