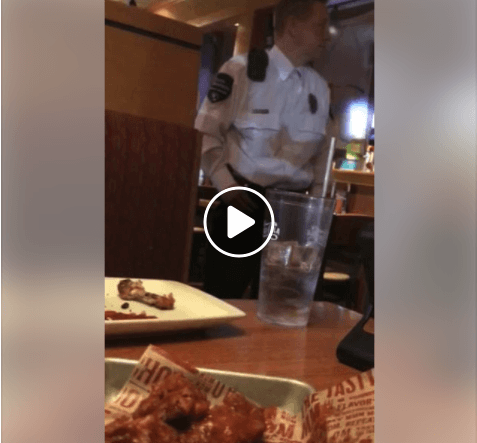 Two Black women in Missouri have gone viral after uploading a video onto Facebook accusing Applebee’s of racial profiling.

According to the video, the Applebee’s restaurant staff called the police after the two women entered the restaurant and accused them of dining and dashing on their bill the previous day.

After a day of shopping Alexis Brison says she and her friend decided to stop at Applebee’s for a bite to eat.

“About an hour into our dinner we were approached by a [sic] Independence police officer, a mall cop, and the restaurant manager,” wrote Brison on Facebook. “We were told that we were accused of eating and not paying for CHICKEN the day before (dining and dashing). Mind you that we have proof that can show our whereabouts and it’s not even in our character to steal.”

“After being mocked, humiliated, and embarrassed we were asked to pay for our food, leave, and not come back,” she continued. “After leaving, calls were made to the restaurant and the manager stated that our accuser remembered that there was a SKINNY girl and a girl who wore MAKEUP. In 2018 is this really what we’re debased to? Our weight and whether or not we wore makeup. She could not recognize any facial features or any defining characteristics. This is a clear example of RACIAL PROFILING that should not be stood for. Just because we are black does not mean we are all criminals and I will not be treated as such.”

Bryson’s video, which as uploaded at 3:45 on Saturday, February 10th, has since been viewed nearly 2,000,000 times with over 43,000 shares. The video begins with the two women speaking to a police officer who was called to escort the ladies out of the Applebee’s restaurant.  Brison can be heard asserting that it was her first time in the restaurant. Still, the officer replies, “What would you do in my position?”

The video at Applebee’s continues and viewers can hear crying, yelling by the two women. They are no longer visible, but the audio is clear.

Prior to being forced to pay and and leave the Applebee’s restaurant, the women were reportedly asked to never return.

Kansas City News reports that Applebee’s released a written statement Sunday that said it regrets any incidents like the one depicted in the video, but has found no indications that the store’s action was racially motivated.

“Our team has been working throughout the weekend and will continue to work to determine what happened and what appropriate measures will be taken,” said Bill Georgas, CEO of Apple Central, LLC., Applebee’s local franchisee.

As the Facebook video went viral there was an outpouring of support and outrage within the comments section.

“This is OUTRAGEOUS!!!!! THESE POLICE OFFICERS NEED TO BE DISCIPLINED!!!!!,” one woman commented. “That witch of a waitress is the root of the problem. That’s who would have to find another job,” wrote one man.

Applebees has issued the following statement in response to the Missouri incident:

“We recognize the hurt and pain caused by the recent incident at an Applebee’s restaurant in Independence, Mo. We very much regret this occurred and sincerely apologize to our guests and community. After an internal investigation and in-line with our values, the franchisee terminated the manager, server and another employee involved in the incident. We do not tolerate racism, bigotry or harassment of any nature, and we have taken additional steps to close the restaurant at this time in order for the team there to regroup, reflect, learn and grow from this. We are reaching out to the guests involved to apologize directly. We know rebuilding trust with those affected by the incident will take time, and we look forward to finding resolution in the coming days.”