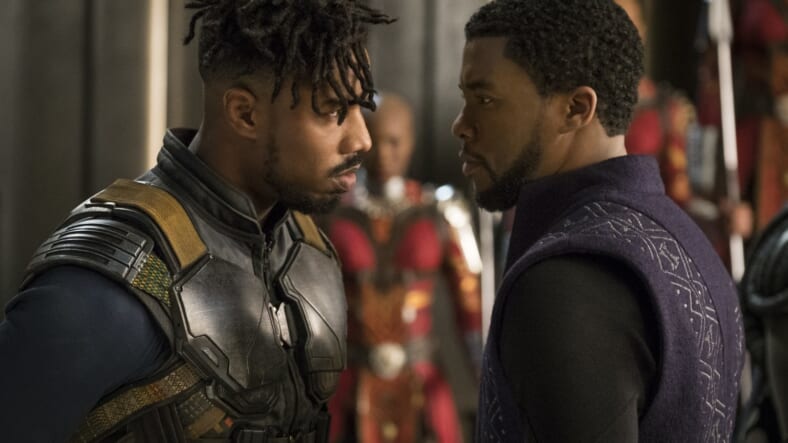 Given the career-boosting track record that Michael B. Jordan had working on Ryan Coogler-directed films (Fruitvale Station, Creed), it wasn’t a stretch for the charismatic actor to sign on when Coogler came knocking a third time for Black Panther.

But Jordan, normally cast as a good guy underdog for prior roles, has admitted that he did have to stretch—and dig deep—when it came to bringing the dark and conflicted character of Killmonger credibly to life for the film.

“…It’s a different muscle for me. I wanted to step outside of my comfort zone and try something different, especially with Ryan,” Jordan told Collider, speaking of both the lure and the challenge of assuming the role of the anti-hero who serves as a human roadblock to Black Panther’s mission and destiny. But the depth of Killmonger’s character and the strength of his convictions make labeling him as an outright villain somewhat complicated. And because Killmonger’s love for his country and his people is just as strong as Black Panther’s, there might be the temptation to root for him at times as well.

The Black Panther movie, named for the first black comic book superhero (created in 1966 by Stan Lee and artist Jack Kirby) is poised to claw its way to the top of the box office February 16 with an Afro-futurist narrative and a cast of high-octane male and female characters.

Black Panther tells the gripping story of T’Challa who, after the death of his father returns home to his technologically advanced African nation to take his rightful place on the throne as the king of Wakanda. Tested by powerful outside forces and a dangerous former enemy, T’Challa and Nakia must fight for the fate of their beloved country and the entire world.

The movie is the 18th film to be spawned from the Marvel Cinematic Universe (MCU), according to CNNMoney, and the highly anticipated movie has already broken Fandango’s pre-sale ticket record for MCU films within its first 24 hours. Industry experts are projecting that the Ryan Coogler helmed project could open at around $150 million or higher. And according to Variety, a strong box office showing for Black Panther, which cost nearly $200 million to produce, would send a clear message to Hollywood that there’s tremendous opportunity to be found in making more movies targeting diverse audiences and featuring Black casts.

The movie’s megawatt casting, with stars like Chadwick Boseman, Lupita Nyong’o, Angela Bassett and Michael B. Jordan, and jaw-dropping special effects, are sure to deliver an unforgettable experience for superhero fans.

But before you head to the theater, meet some of the key Black Panther characters!

Portrayed by: Michael B. Jordan, 31

Backstory: T’Challa’s nemesis, who, when exiled from Wakanda, became an American black-ops soldier whose mission is to overthrow the Wakandan king. Killmonger has issues about how Wakanda has been run and how it should be ruled.

What makes Killmonger pivotal: It usually takes an arch enemy to bring out the ‘super’ in a superhero. Killmonger goes head-to-head with T’Challa in a way that makes it hard to pigeonhole him as a typical “villain.”

Comics vs. Film: In the comics, Killmonger’s Wakandan name is N’Jadaka. Orphaned as a youth, and forced to escape the oppressor who killed his family, he flees to America. He changes his name and eventually becomes a professor at MIT. For the movie, Killmonger’s blonde, wild mane is updated to afrocentric locks.

Michael on Black Panther’s impact: “We’re giving black people power, royalty – we don’t gotta be crackheads or gangbangers, selling drugs or robbing people. We don’t have to be comic relief. We can be superheroes. Imagine what that’s going to do to the imagination and ambition of kids watching these movies.”