When a U.S. president leaves office, the Smithsonian partners with the White House to commission an official portrait to be displayed in the National Portrait Gallery in Washington, DC.

This past October, former President Barack Obama selected New York City-based artist Kehinde Wiley to complete this task. Wiley—known for his highly naturalistic paintings that often take a twist on European classical style—was a bold choice, not only becoming the first Black artist to paint a president’s portrait, but also the first queer artist to do so.

When the news of Wiley’s commissioning for the piece was initially reported, mainstream media did a fair job of acknowledging the importance of his identity as a gay man, something Wiley has been very vocal about.

Today’s unveiling essentially broke the internet as thousands of tweets made it the top trending topic of the morning. The stunning portrait portrays Obama seated in a chair, wearing an all-black suit, intertwined within a vividly painted garden; a background choice that was very indicative of Obama’s background.

–Internet has a field day with Obama portraits, here are some of the best memes– 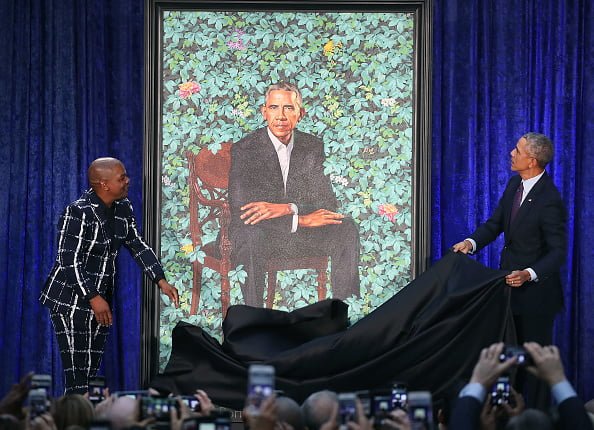 Wiley said he was “charting his path on Earth.” The different flowers woven into the greenery include the chrysanthemum, the official flower of Chicago, and jasmine for Hawaii. There’s even some African blue lilies, symbolic of Obama’s heritage.

News coverage of today’s unveiling noted Wiley as “The first Black artist” to paint a presidential portrait, completely erasing his queer identity. Although many will see this as small, or a part of some “gay agenda,” it is neither. Black queer people have historically faced with the erasure of their identity in order to be accepted in Black spaces, and spaces at large. It’s a byproduct of white supremacy which continues to place us in harm’s way.

Wiley identifies as gay, but also clarifies that his sexuality isn’t so easy to define.

“I’m a gay man who has occasionally drifted,” Wiley told the New York Times back in 2015. “I am not bi. I’ve had perfectly pleasant romances with women, but they weren’t sustainable. My passion wasn’t there. I would always be looking at guys.”

Wiley’s queer identity shapes the lens through which he sees the world and it’s important to his story—as much as his Blackness. The omission of that tells only part of the story, a revisionist history Black queer people are only now unpacking, with many of our legends getting their due honor inclusive of identity long after death.

–Love or hate the new Obama presidential portraits, this is a massive win for Black culture–

Queer legends and icons have always been plagued by the erasure of their identity, despite the importance of how it shaped their narrative and the lens from which they navigated the world. Black queer men have especially helped change our culture in monumental ways, and yet there was the unfortunate reality of being seen and heard as only Black men absent their sexual identity.

In the award-winning documentary I am Not Your Negro, James Baldwin’s life is discussed in full detail with only one mention of his sexuality. Baldwin, who spoke extensively on how being queer shaped his writing, speaking, and views on culture is often reduced to an identity of Blackness absent of his identity as a same-gender loving man.

Community has been unwilling to accept Black queer fully as they are, only accepting Baldwin as the literary and cultural icon that he is, absent of his queer identity.

Civil rights leader Bayard Rustin is another Civil Rights icon whose identity as gay man was not acknowledged until many years after his death. This despite the amount of work he did to ensure the March on Washington as Dr. Martin Luther King’s righthand man. What’s more, Langston Hughes died never speaking of his identity publicly, despite how queerness shaped his work and that of many others during the Harlem Renaissance.

Erasure occurs as a projection of homophobia. The belief that our greatest leaders, writers, and entertainers can only be heralded if they come in a cishet package is highly problematic, and dangerous to the growth needed in society if we are ever going to achieve collective freedom.

The intersection of one’s sex and gender identity with race is important, as it dictates many of the privileges and oppressions one will face in life. If one is living in pieces, one is truly not existing as they are. The lack of acknowledgement for Wiley’s sexual identity plays into the hands of community divisiveness, and devaluation of one’s humanity.

The perceived threat to “Black masculinity” that would come from acknowledging Wiley’s queerness is outweighed by the number of Black queer people dying at the hands of masculinity’s dangerous construct.

To be clear about it, Kehinde Wiley is the “First Black Gay Artist” to be commissioned to paint a presidential portrait for the Smithsonian.

Black narratives have been erased by white supremacy for far too long. We have a duty to tell our people’s whole truth, despite how uncomfortable one’s sexuality may make you feel.