While others have not lived to tell their stories, this Austin teacher opens up as survivor. 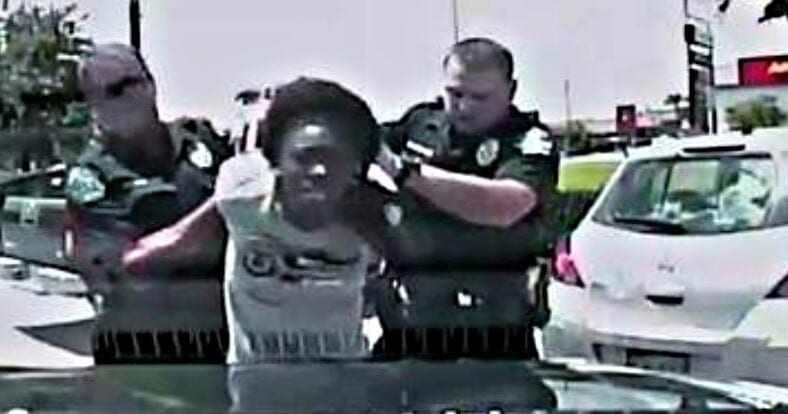 Taken from the dash-cam footage, Breaion King is arrested for speeding.

When asked what the name, Sandra Bland, means to her, Breaion King breaks down in tears. Even the juxtaposition of their names on the screen brings about an uneasy feeling once you understand how their stories could have easily ended in the same way.

Bland was a 28-year old, African-American woman who was arrested on July 2015 during a routine traffic stop in Waller County, Texas. An exchange with state trooper Brian Encinia led to her arrest. The incident was partially caught on the officer’s dash-cam. Three days later, Bland was found in her county jail cell with a noose around her neck. Her death was determined as a suicide.

King, a 26-year old, African-American second-grade teacher living in Austin, Texas, was stopped for moving traffic violation on a sunny afternoon in June 2015. She was coming from Texas State University where she was completing her Master’s program and going to work as an art instructor at a local summer camp. It was route she had taken dozens of times before and the easiest way to get from school to work.

King’s traffic stop was also captured on a police dash-cam. Footage shows Austin police officer Bryan Richter, who is white, asking King to get out of the car. She complied and then was told to return to her car. Richter asked King to push her legs in the vehicle and when she refused, Richter can be seen pulling the 108-lbs. King from her car.  Struggling with King, Richter then bodyslamed her to the ground.

The footage also shows King, hauled and handcuffed in the back of the police car in on the way to the county jail. Confused and overcome by emotions, King asks another responding officer, Patrick Spradlin who was driving, questions to try to understand what just happened to her.

“I asked, why, because I genuinely wanted to understand why,” said King of their conversation. “Truth is, I thought it would never happen to me. You’re on the right path, doing everything you’re supposed to be doing, so I had to ask. His explanation was because Black people have violent tendencies, which was interesting and yet, hard to hear. It was disheartening coming from an officer’s mouth.”

King was charged with resisting arrest, but the Travis County attorney dismissed the case after reviewing the dash-cam video. Richter, who has since been fired by the Austin Police Department for another incident of excessive police force, said in his initial report about the arrest that King showed an “uncooperative attitude” and was “reaching for the front passenger side of the vehicle.”

Unlike Bland, the dash-cam video saved King’s life. In less than 10 minutes, you can see how quickly things spiraled out of control. Those moments, along with King retelling her emotional story from anger to fear and glimpses from her daily life, are detailed in HBO’s “Traffic Stop,” a documentary premiering on Feb. 19. The film comes from the Emmy and Peabody Award-winning team of director Kate Davis and producer David Heilbroner and has been nominated for an Academy Award for Documentary Short Subject. In the 31-minute HBO doc, you will see a painful, vivid picture of what King and other people of color face when race, violence, and law enforcement make a deadly combination.

“HBO caught wind of this dash-cam that had gone viral and how she was treated in the news and felt strongly that Breaion is someone who is an example of an upstanding citizen who is nevertheless completely at peril in a physical confrontation with an officer that changed her life,” said Davis who has been making documentaries for the last 15 years.

“I thought it might be most effective to make this like a poem about Breaion’s life and have people step into her shoes,” said Davis. “Everybody has seen many tragic news stories about African-Americans and other minorities whose lives tragically end at the hands of police unnecessarily. In this case, I felt like she lived to tell the story. She’s a bright light, an incredible teacher and a living example of the fall out of brutality.”

Attempting to change the system

Although a grand jury declined to charge any of the officers involved in Sandra Bland’s death, her mother eventually settled a wrongful death lawsuit against the county jail and police department for nearly $2 million; a decision that also demanded Encina quit the force. King has also filed a lawsuit against Richter and the city.

Breaion King is getting her Master’s degree at Texas State University (Courtesy of HBO.)

READ MORE: COPS SLAM WOMAN TO THE GROUND FOR NOT PAYING BUS FARE

King hopes the film will spark conversation about what is wrong with some of the law enforcement in our country and genuinely hopes it will change lives. Stunted by physical and emotional pain, she sought counseling months after the incident occurred. It was determined that she suffers from PTSD. This film is literally her journey out of that darkness.

“Sandra Bland happened right after me and I was so angry with myself that I didn’t say anything at first,” said King. “I thought, maybe I could have saved her life. I was so hurt. I really don’t want this to happen to anyone else or for anyone else to feel the way I feel.”

“Traffic Stop” premieres tonight on HBO at 8PM EST and is available on demand.

Here’s a preview of the film.