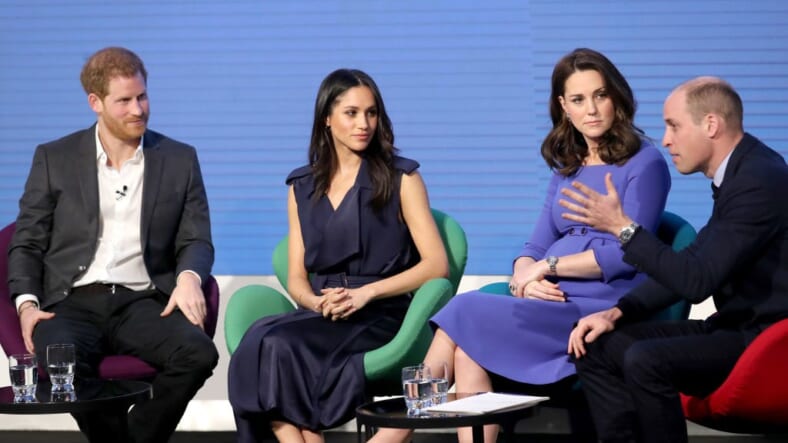 LONDON, ENGLAND - FEBRUARY 28: Prince Harry, Meghan Markle, Catherine, Duchess of Cambridge and Prince William, Duke of Cambridge attend the first annual Royal Foundation Forum held at Aviva on February 28, 2018 in London, England. Under the theme 'Making a Difference Together', the event will showcase the programmes run or initiated by The Royal Foundation. (Photo by Chris Jackson - WPA Pool/Getty Images)

On Wednesday, Meghan Markle made her “working” debut as a member of the royal family with her first public engagement with Prince Harry, Prince William and Kate Middleton.

At the inaugural Royal Foundation Forum, Meghan Markle spoke passionately about the #MeToo and #TimesUp movements and said that she wanted to “hit the ground running” after her wedding to make a difference in women’s empowerment.

“I hear a lot of people speaking about girls’ empowerment and womens’ empowerment; you will hear people saying they are helping women find their voices,” Meghan Markle said at the event, according to the Daily Mail.

“I fundamentally disagree with that, because women don’t need to find their voices; they need to be empowered to use it, and people need to be urged to listen,” Markle continued.

She went on to point specifically to the current cultural revolution of campaigns like #MeToo.

“Right now with so many campaigns like #MeToo and #TimesUp, there’s no better time to continue to shine a light on women feeling empowered and people supporting them,” she said.

As Meghan Markle increases her public appearances royal watchers can likely expect to see heightened security due to recent events.

A letter addressed to Prince Harry and Meghan Markle prompted a terror scare in London last week when it was found to contain white powder.

The letter, which was addressed to both Harry and Meghan at Kensington Palace, was intercepted by security and never made it to either of them. However, they were both informed about the letter and its contents.

–Ethiopians say Wakanda not a far cry from reality—

The white powder was found to be harmless after experts examined it. London’s Evening Standard reported that police are now investigating the matter.

“Police are investigating after a package containing a substance was delivered to St James’s Palace on Monday, 12 February. The substance was tested and confirmed as non suspicious,” a spokesman for Scotland Yard said.

The wedding the world will be watching

The whole world is watching and waiting for Prince Harry and Meghan Markle’s royal wedding, which is scheduled for May 19.

“They hope this short journey will provide an opportunity for more people to come together around Windsor and to enjoy the atmosphere of this special day,” the Kensington Palace statement said of the planned carriage ride.

There’s still been no word on which of Meghan Markle’s celebrity friends will be in her bridal party.