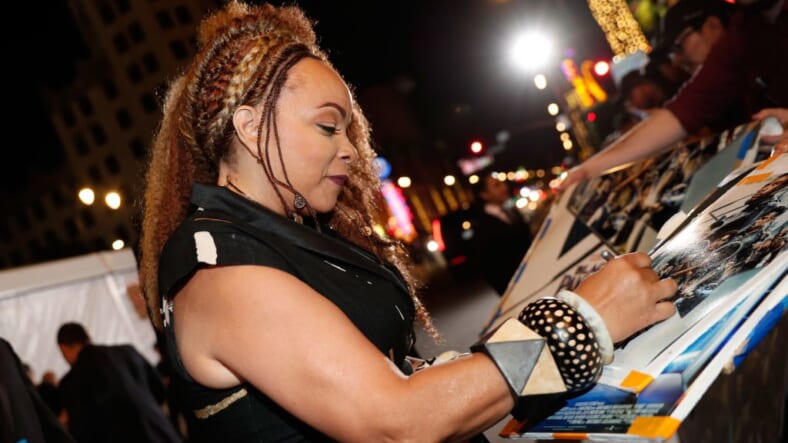 Ruth Carter is once again lending her award-winning costuming skills to Marvel after her Black Panther costumes gained notoriety for their iconic Afro-Futuristic look.

This time industry legend Ruth Carter has been tapped to work on the upcoming film, Silver & Black, a female centered spin-off from the popular Spiderman franchise.

The movie, Silver & Black is still in development but there’s already more #blackgirlmagic to report with Love & Basketball creator Gina Prince-Bythewood set to direct. Prince-Bythewood will be the first woman of color to direct a major superhero movie.

In an interview with Discussing Film, Carter said of the new opportunity:  “I love this new genre and new area that kind of has discovered me. I just want to continue to bring something awesome to it.”

As for the characters Ruth Carter will be outfitting, Silver Sable is a skilled warrior and mercenary who hails from the fictional country of Symkaria. She leads a group known as the Wild Pack, and their mercenary activities are Symkaria’s main source of income. Meanwhile, Black Cat is a sneaky thief who has traditionally been a love interest for Spider-Man, according to Screenrant.

Ruth Carter is a two-time Oscar-nominated costume designer who has designed wardrobes for Black classics like School Daze, Malcolm X to Selma prior to bringing the Black Panther cast to the screen.

And once Marvel dropped the first glimpses of Black Panther costumes #BlackTwitter was abuzz with one question: “How are you rolling up to the premiere?”

That’s the magic of Ruth Carter.

In an interview with The Grio we asked the legendary artist what type of statement she wanted to make with the costuming.

“That you can love Africa,” Carter said. “That you can learn Africa. That just because you see something African doesn’t meant that it defines the whole continent. It’s a world continent. North Africa is different from south; east is different from west, and that’s what we tried to project. It’s a worldview. And that’s what I hope people feel when they come out, they feel like they have gained a worldview.”

And Carter told us she was excited to see everyone dressing up to go see Black Panther.

“It’s incredible. It’s an experience I want to be a part of. I want to dress up too and go to a public theater and sit there and enjoy the work on the screen and how it transcends out into the audience. I feel like that’s a new experience and it’s a smart thing for people to do because it really empowers the rest of the community to say, “This is something that we needed [to see] and I’m so glad it’s happening.”