Is Michelle Obama teasing Malia Obama for photos with boyfriend in tabloids? 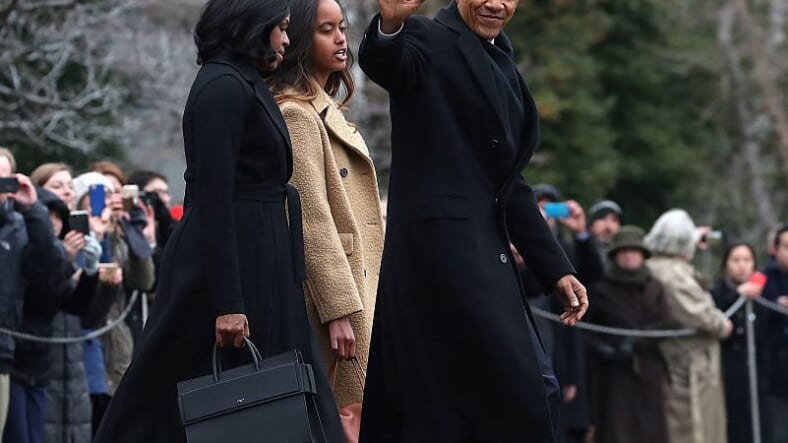 WASHINGTON, DC - JANUARY 10: U.S. President Barack Obama waves as he walks with first lady Michelle Obama and daughter Malia, toward Marine One while departing from the White House, on January 10, 2017 in Washington, DC. President Obama is traveling to Chicago where he will deliver his farewell speech. (Photo by Mark Wilson/Getty Images)

On Tuesday, Michelle Obama was the highlight of the night at Klick Health’s New York event, MUSE. A moderated discussion with the former First Lady covered a range of topics from art and science to her household and Twitter.

Michelle Obama also spoke about the absence of her eldest daughter, Malia Obama, who headed off to Harvard last fall.

While seeing Malia off to her and Barack Obama’s alma mater, Michelle Obama reportedly gave her daughter one sound bit of advice, “Don’t wind up on Page Six.”

“I don’t know if she managed that,” quipped Michelle Obama, according to Page Six.

Love in the spotlight

Could the protective mother have been referencing the photos of Malia Obama and her rumored beau that lit up the internet a few months ago?

Malia and her British boyfriend Rory Farquharson were spotted out on the town in New York City in January looking pretty cozy together.

TMZ first posted the photos but they were soon all over the internet.

The pair first caught national attention when they were seen kissing at a Harvard-Yale football game back in November and it appears the relationship is still going strong.

Malia Obama and her rumored beau were snapped sitting together chatting in Soho as Farquharson enjoyed a cigarette. While Malia has been seen smoking in the past she didn’t seem to be partaking this time. Hopefully, like her father Barack Obama who reportedly gave up smoking when he ran for president at the behest of his wife Michelle Obama, she has kicked the habit for good.

From the looks of things, Farquharson couldn’t take his eyes of his gorgeous girlfriend as they sat bundled up from the cold in their warm coats.

And on the topic of her tweeting habits and the dangers of social media, our favorite First Lady Michelle Obama threw some very subtle, yet calculated shade at a certain President 45, Donald Trump.

“I tweet, but I have a committee,” she continued. “I don’t just tweet off the top of my head, which I don’t encourage people to do — especially kids.”

“How many kids do you know that the first thing that comes off the top of their head is the first thing they should express?” Obama asked. “It’s like, ‘Take a minute. Talk to your crew before you put that [out there] and then spell check and check the grammar.’”

“I think kids do think telling it like it is and talking off the top of your head [is cool]… [but] that’s never been good,” she said. “We weren’t raised like that. That’s rude. That’s what you call rude. But yes, I use social media. But I use it like a grown-up.”

–Ethiopians say Wakanda not a far cry from reality—

For many, it’s an obvious dig at President Trump who regularly tweets in a fit of rage, which often ends up nonsensical, lacking proper spelling, void of consistent grammar, and childish in its accusatory tone. And it’s not Michelle Obama’s first time taking a public jab at the current President. Last November, she gave her first solo speech in Canada and gave a quick crash course on Twitter, offering that it’s “never a good idea” to put your first thought in the morning on social media, or to “tweet from bed,” something we know 45 can’t help but do.

Another Obama running for president?

When asked about whether or not she will run for President, (yet again), Michelle Obama declined and explained why.

“There’s some bright young people out there doing amazing things,” she said at Klick Health’s MUSE event, in reference to activists and civic workers. “This is why I’m not gonna run for president because I think it’s a better investment to invest in creating thousands of me’s because we don’t need just one. We need thousands and thousands.”

“As an old leader, I think it’s important to step out of the way and make room,” Michelle Obama said. “If Barack and I just keep sitting in the same seats and trade seats, like, ‘Now it’s your turn. Now it’s my turn. Now it’s Sasha’s turn,’ then we’re not finding that new energy out there and giving them an opportunity to sit in the same seats.”