Taking the idea of God and guns to a whole new level. 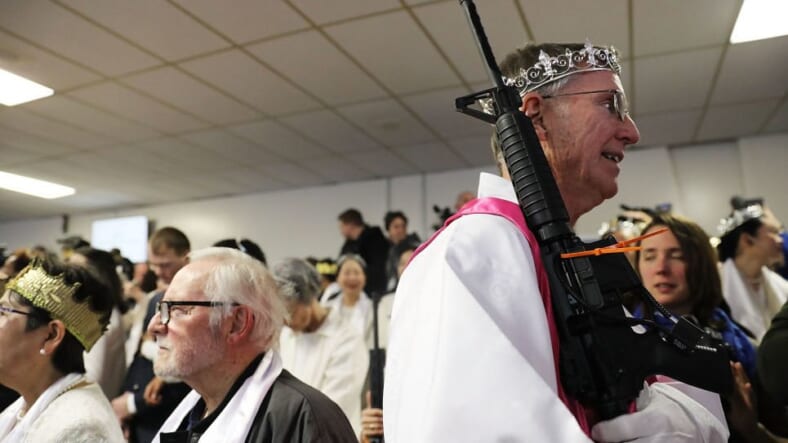 A church offical holds an AR-15 rifle during a ceremony at the World Peace and Unification Sanctuary in Newfoundland, Pennsylvania (Photo by Spencer Platt/Getty Images)

On Wednesday, hundreds of loving couples gathered at a Pennsylvania church in order to renew or exchange wedding vows for the first time, all while several of them cradled their AR-15 rifles.

The controversial event, led by Pastor Hyung Jin Moon of the Sanctuary Church in Newfoundland, prompted the nearby Wallenpaupack Area School District elementary school to send its student to different campuses for the day, according to CNN affiliate WFMZ-TV.

The church members were not allowed to bring loaded weapons or ammunition into the church, and all of the guns were zip-tied for the ceremony, but that didn’t help the unease that the event brought to the community.

The AR-15 rifle is the same one used by Parkland shooter, Nikolas Cruz who killed 17 people two weeks ago and wounded several others.

The “rod of iron”

In an open letter on the church’s Facebook page Pastor Moon said that the event was not meant to “bless guns,” despite reports indicating as much.

The church has indicated that while they believe in the Second Amendment, they do not worship the “rod of iron.” Instead he focused on the parishioners wanting to bless their weddings and marriages as a means of building a stronger community.

“The Bible tells us that God will shepherd His children with the rod of iron, guarding the flock not as a dictator, but as a loving father,” he said. “God does not want us to be helpless victims. The right to self-defense with a firearm is not only an American right; it is a human right.

What’s more, church members believe that they should use this “rod of iron” in their own defense.

“The way the world is going today, it’s just a form of protection for us. We’re not out to harm anyone or cause any chaos or anything,” said church member, John Gidney.

Given the timing of the ceremony so soon after the tragic Parkland shooting at Marjory Stoneman Douglas High School, protesters gathered around Newfoundland Sanctuary Church blasting its members for their insensitivity.

READ MORE: BLACK TEACHERS RESPOND TO GUNS IN THE CLASSROOM

Just after the event, the community also held a vigil at the Pike County Courthouse and read the names of the 17 Parkland victims, according to CNN affiliate WBRE.

The Parkland shooting has propelled gun control into the national conversation, as many of the survivors have continued to campaign to beg lawmakers not to allow such a tragedy to happen to anyone else.