While school safety is top of mind, these educators believe guns and kids do not mix. 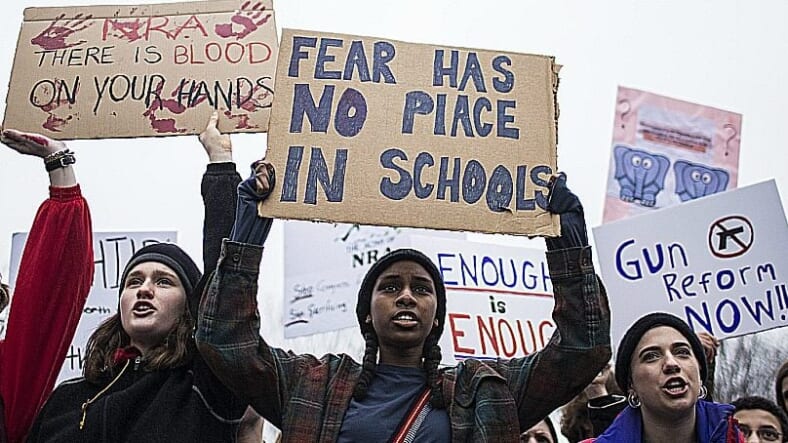 After the Parkland, Florida high school shooting that killed 17 people and wounded many others two week ago, the debate around gun control has once again resurfaced. In addition to calls for more stringent background checks, proposals to defund the NRA and demands to raise the age limit for buying assault rifles, President Donald Trump weighed into the national conversation with a proposal to train and arm teachers with concealed weapons.

The President took the idea even further during a speech last week at the Conservative Political Action Conference where he claimed 10 to 20 percent of American schoolteachers are “very gun-adept people” and that he would be willing to pay them “a little bit of a bonus” for their willingness to receive weapons training.

When confronted with his own words, the President backpedaled from his earlier claims, tweeting that he never wanted to give teachers guns (blaming fake news outlets for the confusion), but instead he meant he supported the possibility of creating policy that would give weapons to those in schools who are comfortable with shooting.

I never said “give teachers guns” like was stated on Fake News @CNN & @NBC. What I said was to look at the possibility of giving “concealed guns to gun adept teachers with military or special training experience – only the best. 20% of teachers, a lot, would now be able to

No one will ever know if having armed teachers at Marjory Stoneman Douglas High School could have prevented Nikolas Cruz from carrying out the mass shooting. This idea of arming teachers, however, has provoked strong reactions from teachers who already have to play educator, protector, social worker, guidance councilor, health advisor, and so many other roles with their students.

TheGrio reached out to principals and teachers around the country who interact with children of all ages and backgrounds daily. If given the opportunity to tell him personally, this is what they would like President Trump to know about where they stand on the idea of gun-toting teachers in the classroom.

There is no singular solution

“Our First Amendment says we believe in free speech, while the Second Amendment is the right to bear arms. Look at how we entertain ourselves—we value weapons in movies and video games. We have to start to looking at guns differently long before any laws can actually change. There also has to be a conversation around race when it comes to gun use.

Sadly, we have a president who is a click bait ho and all he wants to do is say the most ridiculous things to get attention. If given the chance, I would tell him to just shut up. You have to stop talking. The nation is hurting and the most important thing you can be now is a good listener. People feel marginalized. There are no simple answers, but he can try to be the bigger person and just listen.

Our seniors have never lived in a time when there wasn’t a threat of being murdered. l have kids who are afraid to come to school. We keep looking for the singular solution which does not exist. We believe in locking people up, racism, and owning guns. It is all a part of the pathology of being an American—guns and God. This is the time when the only solutions are to listen to one another.”

Are we creating a police state for children?

“I have been a high school teacher and administrator for almost 25 years.

What I hear most is that the presence of armed security, along with the always already present metal detectors and cameras, creates an acute sense of insecurity. Members of the school community, students and teachers alike, feel occupied and under siege. They say they are being treated like criminals, just like residents of highly policed neighborhoods. And, they are right.

In independent schools (where I have spent the majority of my career), there is never an armed security presence. Never. The very idea is an abhorrent anathema to the spirit of intellectual and physical freedom that such schools inculcate within their students. Even after a colleague was shot and killed by an ex-lover just feet away from our campus last year, even after we went into lock-down in the midst of that mayhem, even after we grieved our collective loss and held vigils in protest against another act of senseless gun violence, arming members of our faculty as a preemptive measure against a possible future incident was never on the table.

A tit-for-tat approach to creating the illusion of school security may be the extent of the nuance that President Donald Trump is capable of bringing to this moment. I have no choice but to exploit his racism and elitism to advance my argument: Mr. Trump, only the “worst” schools for “those” students would ever tolerate guns on their campuses. Unless you are willing to create a nationwide police state for white, middle-class suburban students like the one that exists for poor Black and Latino students, I encourage you to rethink your position.”

Say no to guns, but yes to teachers

“It is hard to believe that after yet another school shooting which claimed 17 lives and ripped families and communities apart that we are actually having a discussion about following gross, unspeakable violence with potentially more unspeakable violence.

Are we really saying the answer to the unspeakable act of children being murdered is to introduce more soulless weapons into the one place where children should feel absolutely safe? The logic is absent of, well… LOGIC.

This is a bad idea and at its best, it invites the potential for the weapon to be mistakenly accessible to students. What happens when (not if) an absent-minded educator forgets to secure the weapon before recess? Not even just absent-minded, but the over-stressed, over-worked, under-paid, under-valued teacher who snaps because their most challenging student is pushing them over the edge. This person now has access, opportunity and no filter or self-regulation because they are just DONE and at their wits end. Would mental-illness still be seen as the main cause or would we have to hold the facilitators accountable who enabled the access of the weapon in the first place?

Mr. President, I implore you to walk back from this idea. I say no to guns in teacher’s hands, but yes to paying teachers because we are worth it. Yes, to increasing the amount of resources we have at our disposal so that we can actually, “make America great again.” Yes, to more logical gun control measures. We need to reconfigure our priorities. The world is watching and our aim is way off when it comes to talking about what’s most important.”

I don’t want to be an armed guard

“I’ve been teaching for almost 20 years and in all that time, I have experienced a middle school student bringing a gun to school only once. The student was being bullied and felt it was his only course of action to protect himself. My supervisor at the time discovered the weapon and was able to secure it with no incident. The idea of this teenager having this weapon and feeling like this was his only means of protection was jarring and heartbreaking.

There are so many things that could go wrong with teachers carrying weapons. What if a student disarms the teacher? Who will be held responsible if a child is mistakenly accused of being a threat? Who is paying for these firearms and the training of teachers to carry them? Children come to school to learn and many times it is the one place that remains a safe haven for them.

President Trump, you need to rethink this idea and put your efforts into real gun control. As a teacher, I love the job of instructing children and helping them open their minds to new possibilities. Simply put, I do not want to be an armed guard.”

Time to step up and support teachers

“The idea of arming teachers is not realistic. Educators go into this profession with the intent of growing and shaping the most valuable assets of a community. They went in to have impact on student lives and the future generations. Expecting teachers to go into battle with a weapon is an entirely different aspect and requires a different mindset. Also, what are the requirements for teachers to carry weapons. Do they have to pass a psych evaluation or have to have a certain amount of experience with weapons?

There are things that can be done to improve school security like having more efficient lockout/lockdown capabilities. Also, hiring more security guards, adding bulletproof windows and metal detectors as well as more education around emotional intelligence, coping skills, and mental health.

I recognize that the Second Amendment is a law, but other laws have changed over time. We need to re-evaluate the right to bear arms.? Our country needs to take a hard look at whether or not we value schools enough to put tax dollars to support mental health evaluations for both children and adults. I challenge our country to step up and support your teachers. They serve you and your most priceless asset—your child.”

Gun violence is not just an urban issue

“As a Black educator, I want to teach and inform my students with tools to be successful citizens, not a gun toting defender.

Working in an urban school in NYC metal detectors are the norm. Violence with weapons have been issues that we have faced for decades. To arm teachers is not the solution. Taking tips from urban schools by providing proper safety procedures such as well-trained school safety agents, appointing peace officers, installing metal detectors, and most importantly, continuing to educate children about gun violence. Most importantly, providing social emotional supports for students based on the climate in their homes, their communities and the broader society will bring positive change and reduction of these school shooting problems.

Suburban and rural communities are changing and must take a different look at their schools and move them into a more modern perspective. Donald Trump needs to know that gun violence is not just an urban issue, it’s our country’s issue.”

Becoming an image of fear and a reminder of a threat

“Imagine me, an educator and agent of change, arming myself to take someone’s life. The thought is ludicrous in every way imaginable. It troubles me that such a notion could even be conceived as a possible solution to the plague befallen our schools. It is this type of mentality that pollutes the minds of those who are already struggling with mental instability. Once a teacher arms him or herself, that teacher can no longer be seen as a messenger of hope, warmth, and inspiration; instead, the teacher becomes an image of fear and a reminder of looming threat.

Ideally, schools should have plain-clothed officers who can protect lives while allowing teachers to their jobs of educating and ensuring lives. If town budgets can only support a few of these officers, I would then suggest metal detectors at the key entrances and monitored cameras at secondary entrances. The aforementioned, is similar to practices utilized in my district. This along with routine safety drills and established emergency procedures has alleviated much of the anxiety that has been experienced nationwide. Nothing is ever fool proof, but it’s better than the alternative suggested by President Trump.”

*The views expressed are strictly that of the individual and do not represent that of the school or school district.