Pete Souza makes us wonder is the current President overweight or clinically obese? 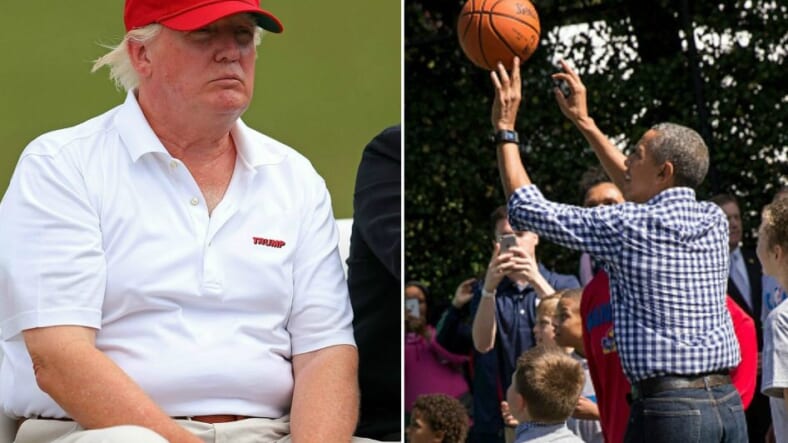 Former White House photographer Pete Souza has become a social media hero for his Instagram account where he posts throwback images from his time with the Obama administration. The best part is when Souza subtly throws shade and takes digs at those who currently occupy the White House.

The latest homage to the Obama years shows the former president running, with his sleeves pushed up.

The caption says it all: “Back in the day when our President could run.”

Back in the day when our President could run.

Souza’s dig may be in response to the #Girther movement, which cropped up after Donald Trump underwent a physical examination by his personal physician and was declared to be overweight, but not obese.

At 6-foot-3-inches, the president’s recorded weight of 239 pounds is just 1 pound shy of what is considered clinically obese for his height. However, the New York Daily News noted that his height had been disputed in the past.

A picture of his New York driver’s license listed him at 6-foot-2-inches. That extra inch off would put the president in the obese category.

Girtherism is in line with Trump’s Birtherism in which he called for Obama to prove his U.S. citizenship. Critics, in turn, have called on Trump to prove his weight and height.

Walter Reed National Military Medical Center Dr. Ronny Jackson told the press back in January that the president was in “excellent” health, but could probably stand to make some better lifestyle choices.

“I told the President if he had a healthier diet over the last 20 years, he might live to be 200 years old,” Jackson said. “He has incredible genes, I just assume. If I didn’t watch what I eat, I wouldn’t have the cardiac and overall health that he has. He’s very healthy despite that he does those things.”

As you can imagine, no one really believed that.