The activist and pastor is preaching with the help of the blockbuster flick, but not everyone is happy 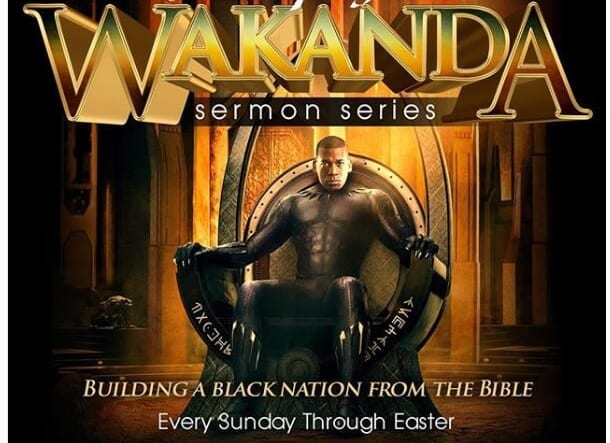 Looks like not everybody has caught Wakanda fever, at least not some church folk.

Last Sunday, Pastor Jamal Bryant decided to capitalize on the success of Black Panther and organize an event called “The Gospel from Wakanda,” in which his church, Empowerment Temple, invited parishioners to come dressed in their best African attire for a worship service.

“It’s notable that Marvel released Black Panther last weekend with discussions of racial identity on the national stage,” says some commentary beneath the invite on The Old Black Church blog. “The film wears its African origins and culture on its sleeve, striking all the right notes without ever feeling cheap or gimmicky.

Pastor Jamal Bryant and his church family are planning to ride some of that positive energy for the month of March by wearing African-themed attire all the way up to Easter. Bryant has a history of choosing topical issues to attract people to his church and often uses politics, social issues, (and now movies) to engage his flock.  But not everyone is excited about this newest idea.

In a related post on the blog, Bryant took sharp criticism over using Black Panther as a theme for his sermons.

“This Black Panther stuff [is] going way [too] far folks,” shares one commenter. “Please people get back to studying the WORD of GOD!!! People are getting to carried away…nothing about this movie was scriptural.”

Another commenter called Bryant a “carnival act” who loves to “put on a show.”

Pushback aside, not only did the pastor go through with his plans, he intends to keep it going for quite some time.

Reportedly, the movie themed service held on February 25th was just a first of a series in which Bryant is encouraging black empowerment, according to a post from that day that he posted to YouTube.