"We should have a conversation that is inclusive... intersectional," says New Jersey Senator. 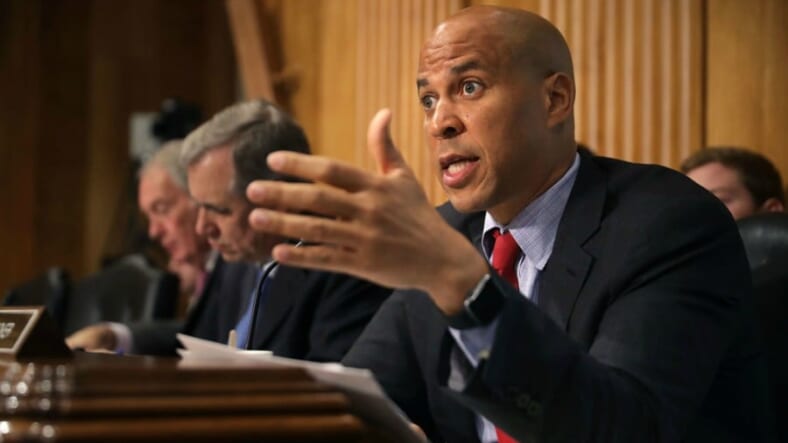 (In this preview clip of our exclusive interview with Sen. Cory Booker, he tells theGrio’s Natasha Alford why the gun control debate must include black communities.)

In the wake of the horrific school shooting in Parkland, Florida, a new wave of gun control activism has overtaken the country.

The passionate pleas and tearful cries of high school students throughout the country have not fallen on deaf ears, as outlets like Dick’s Sporting Goods drop the sale of assault-style rifles and raise the age of consent to 21 to purchase firearms while airlines like Delta have agreed to cut ties with the NRA.

Gun control activists who have been fighting on the front lines in inner cities and on behalf of the Black Lives Matter movement are uncomfortable as one question lingers—why wasn’t there as much outpouring of support when fighting for Black kids shot and killed in urban communities?

I remember another time when students transformed grief into action by demanding change from FL lawmakers when they were devastated by senseless killing of their unarmed peers. @Dreamdefenders rarely received national media attn & support but they laid the groundwork. Thank you.

In an exclusive interview with theGrio, Senator Cory Booker (D- N.J.) addressed the issue of gun control by saying, “We should have a conversation that is inclusive, where there is intersectionality.”

“I think [Parkland students] are brilliant activists, they are showing incredible ability to break through all the normal noise that diffuses, dispels, disperses energy towards gun safety measures. So, God Bless them for doing that,” said Booker.

“In their call, ‘never again’ we who live in communities like mine, know what the reality is.”

“Every single day in America… we have a mass shooter—30 plus people being killed. And often they are low income people, people of color, people who seem to be not getting the kind of attention, or the care or the concern, they don’t motivate the moral urgency to deal with these problems.”

Booker also pointed out that there hasn’t been enough attention on women who are victimized by gun violence.

“This doesn’t even include the women who are a part of the largest number of people being murdered on a daily basis by their partners, by stalkers, by their ex-boyfriends or ex-husbands. Where is the moral outrage about the level of domestic violence and domestic murder that is going on in this country?”

Sen. Booker, has advocated for background checks on gun purchases and recently joined with other Democrats to propose banning AR-15 rifles.

Thank you @DICKS, this is a step in the right direction. We need more leadership like this. #NeverAgain https://t.co/MXWlDUqEE3

He served as the Mayor of Newark, NJ for seven years, a city which once held the unfortunate title of having the highest murder rate in the country.

For more on criminal justice reform, DACA, ‘Black Panther,” corporate PAC donations and whether Booker will run in 2020, watch our interview on theGrio’s YouTube channel.