Can we get a buddy cop movie from these two? 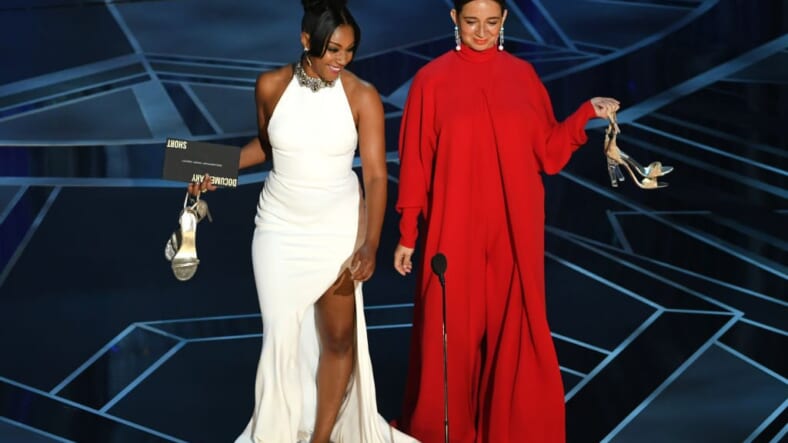 The two critically-acclaimed comedic actresses walked onto the Academy Awards stage holding their impossibly high heels in their hands. Rudolph appeared to be barefoot and  Haddish’s brown, fuzzy slippers could be seen peeking out from under her white gown.

After the pair groused about blisters, foot pain, and a pinky toe that had fallen off, Rudolph and Haddish launched into a bit about race at the Oscars.

Rudolph: “We are so happy to be here, but a little nervous, too, because a few years ago, people were saying that Oscars were so white. And since then, some real progress has been made.

Haddish: “But we — when we came out together, we know some of you were thinking, are the oscars too black now?”

Rudolph: “But we just want to say, don’t worry. There are so many more white people to come.”

Haddish hammed it up talking about the different types of white people that could be found rambling about backstage.

The bit was well received by the glitzy audience. Reaction shots of Daniel Kaluuya, Viola Davis, and Octavia Spencer showed all of the thespians laughing and smiling as Rudolph and Haddish nailed their bit with with perfect timing and chemistry.

-Jordan Peele makes history with Oscar win for ‘Get Out’ screenplay-

A History of Comedic #BlackExcellence

Haddish was the breakout star of last summer’s box office hit Girls Trip, co-starring Queen Latifah, Regina Hall, and Jada Pinkett-Smith. Though hardly new to Hollywood, Girls Trip marked Haddish’s first major role in a film and she made the most of it. She stole every scene and quickly became a media darling. Haddish even made history has being the first Black female stand-up comedian to host an episode of Saturday Night Live (SNL).

SNL is of course the old stomping grounds of Rudolph. She was a member of legendary show’s cast 2000-2007 and has made numerous guest appearances since then. Like Haddish, Rudolph is no stranger to films starring an all-woman ensemble cast. She starred in the 2011 hit film Bridesmaids with a bevy of other actresses.

Will Rudolph and Haddish take their chemistry from the Oscars’ stage to the big screen? We certainly hope so.