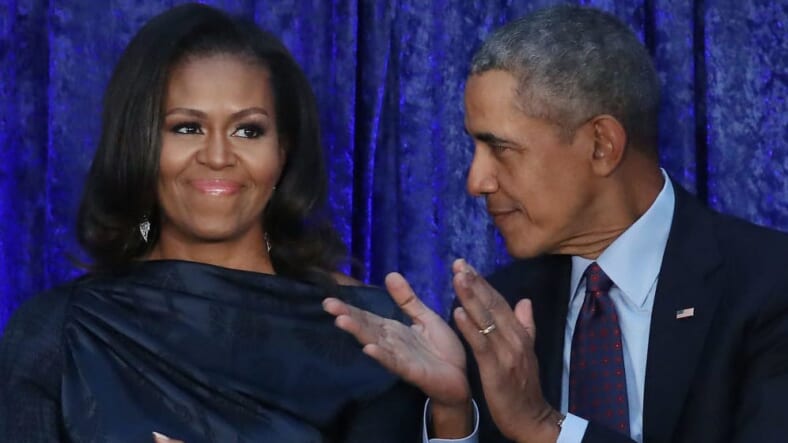 WASHINGTON, DC – FEBRUARY 12: Former U.S. President Barack Obama and first lady Michelle Obama participate in the unveiling of their official portraits during a ceremony at the Smithsonian’s National Portrait Gallery, on February 12, 2018 in Washington, DC. The portraits were commissioned by the Gallery, for Kehinde Wiley to create President Obama’s portrait, and Amy Sherald that of Michelle Obama. (Photo by Mark Wilson/Getty Images)

Michelle Obama will be booked this fall on tour once her upcoming memoir drops on Tuesday November 13, according to the book’s official website.

The former first lady revealed the beautiful cover of her memoir Becoming, on Instagram and discussed how personal and the moving the process of writing the book has been.

“Writing BECOMING has been a deeply personal experience. It has allowed me, for the very first time, the space to honestly reflect on the unexpected trajectory of my life,” she said. “In this book, I talk about my roots and how a little girl from the South Side of Chicago found her voice and developed the strength to use it to empower others. I hope my journey inspires readers to find the courage to become whoever they aspire to be. I can’t wait to share my story. Please visit the website in my bio for more information.”

We’re sure the website servers will go down shortly.

According to the press release on the book’s official website, the Michelle Obama memoir will be published by Penguin Random House and released in 23 languages in addition to English.

Even before the release of Michelle Obama’s memoir she’s been inspiring girls and women around the world.

And recently her painting by Amy Sherald at the National Portrait Gallery, caught the eye of a little girl who couldn’t take her eyes off of it.

A photo has surfaced of a little girl named Parker Curry staring at the painting in what appears to be wonder. It was taken at the National Portrait Gallery in the days that followed the unveiling.

According to the girl’s mother little Parker thought Michelle Obama was a queen and now she wants to be a queen as well.