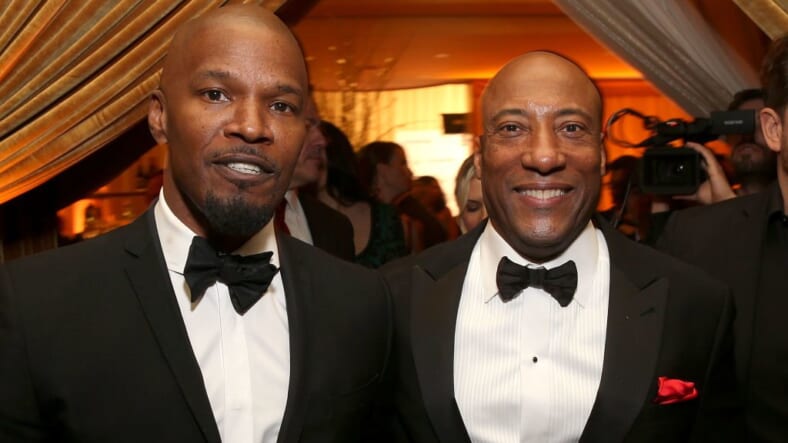 Oscar night was full of high-profile events but none did more good than Byron Allen’s Oscar Gala.

The annual event featured performances from Katy Perry and Jamie Foxx, and raised more than $1.5 million for Children’s Hospital Los Angeles, surpassing last year’s efforts. The viewing party was also a sit-down dinner and auction, as well as a celebration of the 25th anniversary of Allen’s company, Entertainment Studios.

It was a lavish affair at the Beverly Wilshire Hotel in Beverly Hills. Celebrities mixed and mingled with industry insiders and charitable attendees who sipped on cocktails at one of the party’s three full bars and enjoyed a three-course meal while watching the Academy Awards on several huge screens.

Later, Jamie Foxx hit the stage and pumped up the crowd by showing off his moves and singing along with hit songs the DJ was spinning. When Katy Perry was announced, the crowd went wild! She delivered a medley of her hits including “Chained To The Rhythm” and “Teenage Dream” and even collapsed onto the stage at one point during a powerful  rendition of “Dark Horse.”

“We are so proud to be raising money and giving back to those who need our help the most,” Allen said at the event. “We can’t do enough for the Children’s Hospital Los Angeles.”

The company’s 2017 summer release, 47 Meters Down, ended up bringing in nearly $45 million, making it the highest-grossing independent film of 2017.

Their Christian Bale-led Western, Hostiles, surpassed expectations at the box-office and received praise from critics across the board.

Check out a few snapshots from the glamorous event.

Jamie Foxx gets the crowd pumped up for an epic party at Byron Allen’s Oscar Gala in Beverly Hills. (Photo by Jesse Grant/Getty Images)

Garcelle Beauvais in a stunning white ensemble and fabulous retro-inspired ‘do. (Photo by Jesse Grant/Getty Images)

Katy Perry tears up the stage and performs several songs for the star-studded crowd. (Photo by Jesse Grant/Getty Images)