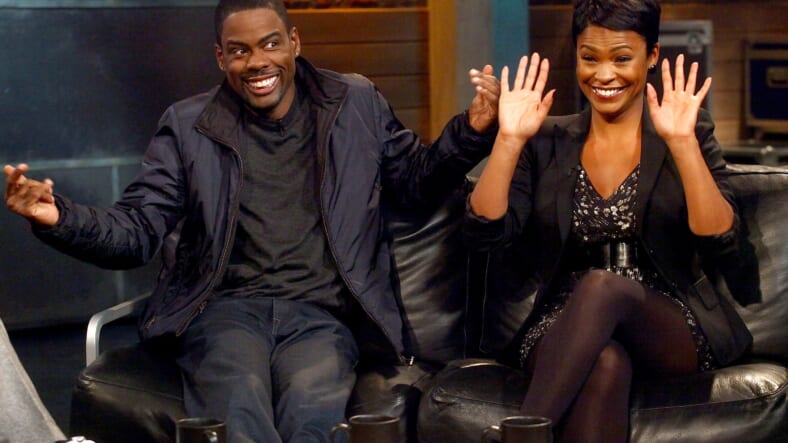 Celebs hook up all the time but sometimes there just isn’t enough chemistry to make it work—and apparently that was the case when Nia Long went on a blind date with comedian Chris Rock.

Nia Long spills all the tea on the dating debacle in an upcoming episode of TV One’s Uncensored.

Our favorite homegirl-next-door actress laughed as she recalled the blind date with Chris Rock back in the early 90s, saying it was the worst date ever.

“I remember Chris Rock and I were set up on a blind date,” Nia Long said. “He was on Saturday Night Live. We went out. We hated each other. I was like, ‘This dude is not even that f–king funny.’ And he’s the only dude that has ever given me a false number [laughs].”

And while Chris Rock struck out with Nia Long, he’s been speaking out recently about how he’s not having much luck with the ladies. He divorced his wife, Malaak Compton Rock, and admitted on his stand-up special Tamborine that he cheated on her with three women. And Rock said he even tried to holler at Rihanna after the divorce, but the ‘Love On The Brain’ singer shot him down with no shame.

“How you doing Rihanna?” he said he asked the 30-year-old pop star. “Rihanna looked at me like I was one of her aunts. She didn’t even register me as a d–k-carrying member of society. Like, I would have had an easier time ­f–king Aretha Franklin.”

As for Nia Long, Chris Rock said he was said turned off by the fact that when he asked if she was seeing anyone, Long replied, “No, but I know where to get some d–k if I need it”.

But it looks like the two stars are both happy in love with other people.

Check out Nia Long when her episode of Uncensored airs on Sunday, March 11.