File this under "Oh, Hell Nawl" 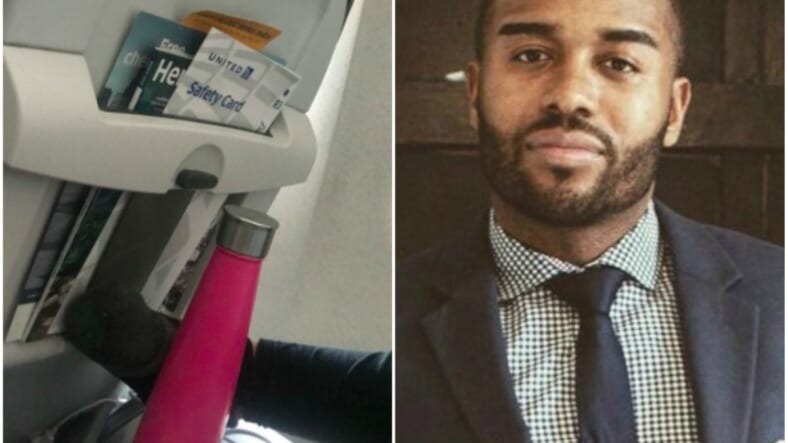 Frederick Joseph and some woman’s feet.

Imagine you are minding all of your own business on a flight, gnawing at the overpriced food splayed before you, when you notice in your peripheral vision, your seatmate’s stockinged feet laying atop the food tray–mere inches from the items you are shoveling into your mouth.

That is precisely the unsanitary, disgusting, and rude as hell situation Twitter user Frederick Joseph found himself in on a United flight recently.

Joseph, a Black man, was of course taken aback by the audacity of the white woman next him treating their cramped, economy class quarters like her personal Barcalounger.

When Joseph asked the woman to move her hooves away from his food, she had the nerve to catch an attitude and refused to budge. In addition to that, she called over a flight attendant to complain that Frederick was “disrupting” her flight.

None of that is surprising because we all know white folks love to tattle tell. But what happened next is down right shocking. Lucky for us, Joseph detailed the whole scenario in a string of tweets that are equally hilarious and horrifying.

This woman next to me took her shoes off and placed both feet on the table. So I’m waiting for flight staff to say something… pic.twitter.com/ldOIgwiPWi

After the white damsel in distress agreed to put one of her nasty feet on the ground, she demanded to be compensated for the “inconvenience.”

The kicker? The flight attendant acquiesced and gave that rude, pushy woman a $1000 voucher! This woman was rewarded basically rewarded for being raised in a barn.

So the flight attendant speaks to the person in-charge on the plane and they give promise this woman a fucking $1000 voucher … ONE.THOUSAND. DOLLAR. pic.twitter.com/0DEZKKDU1e

Joseph of course asked to be compensated for his ACTUAL inconvenience and… no dice.

The flight attendant says “sir, we can only make but so many accommodations, and she has agreed to move her feet for you.” pic.twitter.com/617NE2aG06

A phone call to United proved to be fruitless as well. Joseph got an outpouring of support from his Twitter followers who flooded United’s timeline to complain on Frederick’s behalf. Someone even offered legal representation.

The day after the incident, United phoned Joseph to assure him that the woman on the flight did not receive a voucher.

UPDATE: so @united called me this morning to tell me that the passenger didn’t receive any compensation.

So I told the United representative “I’m happy to hear that, but I still have an issue with the flight attendant pacifying her and essentially taking her side.” pic.twitter.com/ODLGcRpdv6

Joseph told the United representative that it’s great that the woman did not get money, but he still felt slighted by the poor customer service from the flight attendant. He also pointed out that a person of color putting feet on a food tray would have been received very differently. The United staffer assured him that race was not an issue.

I continue “also, I find it hard to believe that if this was a person of color someone wouldn’t have asked her to put her feet down.”

She says “sir, I personally don’t believe it has anything to do with race or culture. As you can hear from my last name, I am a Hispanic person” pic.twitter.com/Z4Y9vkMjee

Right. Joseph was offered no compensation, but was told that his comments would be forwarded to the flight staff. Way to go, United!

Basically, United had a woman w/ a Spanish sounding surname tell me there should be no issue because the woman ended up not getting money.

Oh, and racial bias didn’t matter here, because again a woman with Spanish sounding name at United says it didn’t.

If Frederick Joseph’s name sounds familiar, it’s because he is the creator of the #BlackPantherChallenge— the challenge in which people step forward to help underserved communities and children see the biggest movie of the year.  Joseph launched a GoFundMe campaign to help Harlem kids see Black Panther and the campaign exceeded its $10,000 goal in just three days.

Celebrities like T.I., Viola Davis, and Snoop Dogg all accepted the challenge and thousands of kids all over the country were able to see Black Panther in all of its glory, helping to blast the movie past the billion dollar mark at the box office.

Joseph’s dedication helped a lot of children take in positive representations of themselves on the big screen (not an everyday occurrence), the least United can do is give the man a decent flight.