Michael B. Jordan surprises little boy with video that makes you happy cry 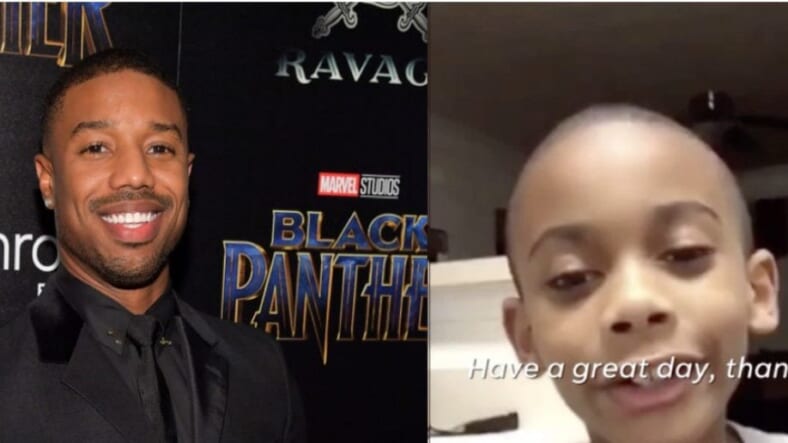 In a world where the good guys in comic books are usually the fan favorites, Black Panther‘s Killmonger has attracted the attention of a very special little boy.

Eight-year-old Adonis Wolfe is cool with his biggest hero Michael B. Jordan playing the baddest dude, Eric Killmonger in one of the greatest movies of all time: Black Panther.

And while Killmonger may be bad, Michael B. Jordan is all heart and recently took time out to send Wolfe a special video message and schooled the second-grader on being his very best in order to grow up and conquer the world.

‘It’s tough being a Black man in America’ Michael B. Jordan on going from broke to ‘Black Panther’

Adonis Wolfe’s mom Jenaiya Coleman made some magic happen for her son after she recorded a cute video of him telling Michael B. Jordan how much he loves the Black Panther movie. But how did Coleman get the superstar celeb with five million followers to even see it?

The Georgia resident said it all started after she took her son to see the blockbuster movie and he couldn’t stop talking about it. Then she said he became so obsessed that he drew a picture of Killmonger that was so dead on it impressed her.

“After I took him to see the movie, he talked about the movie of course for days and days,” Jenaiya Coleman said in an exclusive interview with TheGrio. “A couple of days before the weekend he said, ‘mommy I have to show you a picture’ and he drew a picture of Erik Killmonger.  I was like, ‘oh wow this is actually a good picture.’”

Coleman said from there she formulated a plan to show Jordan the fan art Wolfe made. “I said, we’re going to find a way for Michael B. Jordan to see the picture,” said Coleman.

“But I lost it,” Adonis chimed in.

Getting the message to Michael B. Jordan

Sad, but still determined, Coleman said she took to Instagram and made Jordan her #ManCrushMonday. While she says that isn’t something she usually does after talking to her son about his love for the actor, and how much the film inspired him, she hoped she could catch the eye of one of Jordan’s fan pages.

“Two of his fan pages LIKED the Instagram post. I actually sent the message to one of the pages telling her thank you and that my son would just appreciate knowing that one of Michael B. Jordan’s fan pages liked the post.”

Mom was doubtful she would ever get a response. “He has over five million followers right now and I’m pretty sure his DMs are going crazy!” Coleman said laughing.

The fan page administrator was apparently instrumental in getting Jordan to see the post and the Black Panther star replied thanking Adonis for the compliments.

That’s when Coleman took it a step forward, had Adonis record the video and she sent it back to the fan page, unsure of what the end result would be.

A message from a hero

Adonis was in bed sleeping when Coleman’s phone buzzed and she woke Adonis up to a big surprise: Jordan had recorded a message of encouragement exclusively for him!

“If you work hard, listen to your mother and do all your work, especially your schoolwork,” Jordan says on the video message, “you can be … whatever you want to be — a doctor, engineer, lawyer, mechanic, biologist … . Whatever you put your mind to, you can achieve.”

“Listen to your mother and do all your work, especially your schoolwork,” Jordan said.

Coleman was beside herself with joy.

“I was completely blown away by it,” she said about the video message. “I thought it was really nice of him to take out the time to send that message back to Adonis and it meant so much. He cried his eyes out when he saw it. And I said what are you crying for and he said, ‘I’m just so happy. I can’t believe he did that for me. It was the nicest thing anybody has ever done. ’”

Continued Coleman: “I know he’s preparing for Creed 2 right now and it really made me appreciate him as a person that he actually took out the time to make this video. The fact that he stopped whatever he was doing to make a video for my son meant so much to him.”

Wakanda forever! Get all the details on the ‘Black Panther’ sequel

Wolfe got even more cool points in his Shoals Creek Elementary second grade class after his teacher Mrs. Jones showed his classmates.

And how does Adonis feel after his favorite hero gave him a personal shout out?