Give it a rest y'all. 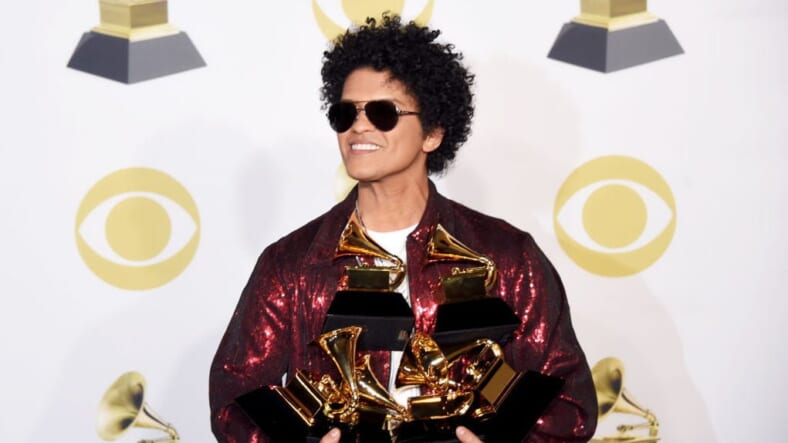 Sure, he was cute and all as a baby Elvis in Honeymoon in Vegas, but his music never resonated with me. Considering that my sexagenarian mama has paid to see Mars in concert, I’m well aware of both his talent and pop culture reach.

So, when I defend him against renewed allegations of cultural appropriation, it’s not from the perspective of a poster-rocking fanboy whose nipples get hard when he sings – it’s from someone who is tired of folks throwing around words without knowing their meaning.

The argument of Mars as an appropriator seemed to originate last year from fellow Chicago writer Jenn Jackson, who stayed her course despite being dragged to the edge of the Milky Way and back.

I really need y’all to stop with this Bruno Mars praise and be more critical about the ways we understand appropriation.

The discussion jumped off again this past weekend, when writer/activist Seren Sensei went off on Mars for being an appropriator, leading to Mars becoming a trending topic and something for Black Twitter to bitch about on a day in which we all had an hour of extra daylight to do something more interesting.

this is why i hate bruno mars @seren_sensei says it all pic.twitter.com/CRLktsA2ea

See, this is the only time I actually want to see the leader of the free world tweet something stupid, because it’s an incident way more worthy of all of us getting behind than whether a Kit-Kat-complected pop mega-star is “problematic” because he makes good, clean music that makes the world wanna shake their asses. I thought Jackson’s dustup was the end of this discussion, but it would appear that righteous Millennial boredom knows no bounds.

I’m waiting for Black Mirror to influence a button that will rid social media of a given topic forever. In the meantime, I’ll just leave this here as the final, last, ultimate and definitive word on why the Bruno Mars appropriation discussion is beyond stupid.

Mars is half Filipino, a quarter Puerto Rican and a quarter Ashkenazi Jewish. Like Pinays themselves, Filipino music is inspired from regions across the globe. As for Puerto Ricans, they were very much co-originators of hip-hop, which itself originated from soul and funk music, in 1970s New York. All of this has factored into Mars’ influences as a life-long musician and performer. He isn’t some white kid from Eau Claire, WI. who grew up listening to Dolly Parton records and one day decided to perform that “nigrah music.”
In regards to his Puerto Rican side: the biggest difference between them and Black Americans is the fact that the slave ships landed on a different island. As a man who was married into a Puerto Rican family, take my word on this shit.

If we’re going after Bruno, we gotta get everybody

Based off the logic people use to consider Mars a cultural appropriator, we need to target literally every nonblack artist who ever touched black music. Eminem. Beastie Boys. Teena Marie. We even have to throw the great Elton John under the bus for “Bennie and the Jets,” and that shit ain’t happening on my watch.

I could spend the rest of the morning listing off beloved artists who dared be influenced by a Black musician and decided to pay homage through their own music. But if this ever becomes a real “thing” and we have to cancel non-Black artists for doing so, some of y’all’s iTunes playlists would dry up faster than Nick Gordon’s phone.

The legends show him love

Mars doesn’t make his music in a vacuum: He employs Black musicians to work in his band (his bass player is named Jamareo Artis, whose name is so Black I don’t even have to use Google to confirm). He dances onstage with Black dancers respectfully, not using Black bodies to emphasize what he’ll never have (a la Miley Cyrus). He’s essentially keeping Black musicians employed.

More importantly, bona fide Black legends including Babyface, Jimmy Jam and Terry Lewis have co-written his music. I’d love to see y’all drag Babyface into this conversation to accuse him of contributing to cultural appropriation…I’d bring the tea and popcorn.

The “props” conversation is not rooted in reality

Mars’ detractors claim that they have a problem with how non-Black people get more accolades for performing “Black music” than Black people do. This might be the stupidest argument yet because my fingers would go bloody typing out the names of all the Black music artists who have been critically and financially lauded for their music over the last century – deservedly or otherwise. That Migos is the biggest band on the planet right now should tell you everything you need to know about what accolades really mean.

Mars said in a Latina magazine interview a year ago American music is Black music and that Black artists don’t get enough credit for their influences on his music and others’. They weren’t his first comments on the topic. If nothing else, Mars consistently lets the masses know how much he owes to Black musicians for his success. He basically took the opposite road of Iggy Azalea, who would have a hard time booking an Old Country Buffet in 2018 in part because she was too stubborn to show respect to her forebearers.

Jimmy Page borrowed music from other cultures to craft classic Led Zeppelin songs. Drake is basically hip-hop’s version of the Mega Maid from Spaceballs, sucking up everything in his sight to make his own. If you believe Quincy Jones’ batshit-nuts Vulture interview from a little while ago, even undisputed legends like Michael Jackson borrowed from others. Damn near every musician you love has either conservatively borrowed or pulled a straight jack move from someone who came before them. If this is your beef with Mars, prepare to purge your whole damn music collection.

There are so many actual appropriators to go after

To my knowledge, Mars has made no attempts to caricaturize ethnicities on stage or in his music. But my god, so many popular artists have insensitively hijacked cultural elements for their music. Katy Perry went full saltine Geisha. Taylor Swift’s totally-not-problematic-at-all ass used Black booties for her “Shake it Off” video. And, of course, there’s Cyrus with her ridiculous faux-hood phase that she basically wants us to forget about now. Mars doesn’t do any of this. He simply makes music that y’all love and he wins awards for it.

If I’m keeping it a full buck, Mars is just the latest target of folks with internet connections and nothing better to do. You can hate his music. Hell, you can consider it an inferior rip-off of music that came before him. You can hate his Sideshow Bob hairdo. But hating him for “appropriation” indicates that you need both a history lesson and a better way to utilize your time.