Comedian Hannibal Buress gets shut down on stage for rape jokes

Find out why Loyola University officials decided to cut his mic off. 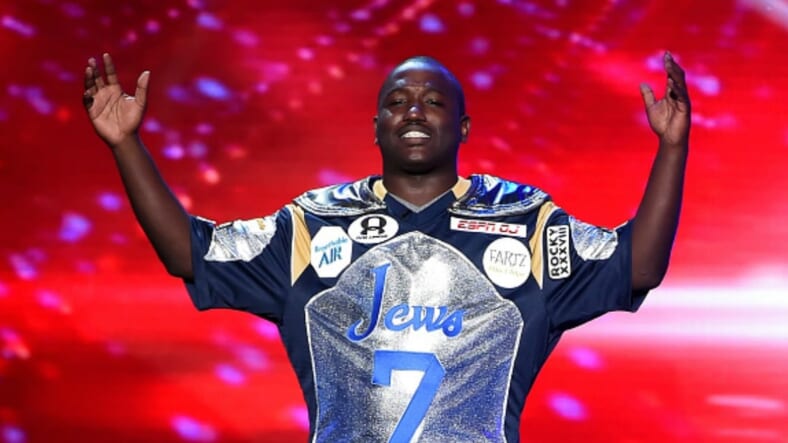 Comedian Hannibal Buress, known for being the over-the-top funny man who is the unofficial whistleblower of Bill Cosby’s sexual assault implications, found himself in a slew of trouble on Saturday.

Performing at Loyola University in Chicago, the comedic writer reportedly had his mic cut off less than five minutes into his act, according to DailyMail. It seems that a joke about child molestation and sexual abuse in the Catholic church didn’t sit well with the school’s administration.

Buress had been hired by the university to co-headline a two-day event dedicated to music and comedy.

At the beginning of his set, he referenced an email he received from the school, detailing that he must exercise appropriate behavior and language in front of the students. Among the list of items included a ban on swearing, as well as absolutely no references to “rape, sexual assault, race, illegal drugs and sexual orientation/gender.”

Buress’ microphone was cut off, according to the school’s newspaper The Loyola Phoenix, but he attempted to proceed without it. To counter-act, music was played at loud volumes to drown Buress’ voice out from within the venue.

Buress left the stage but was then allowed back on 15 minutes later, where he was greeted with a standing ovation. He continued until the end of his set, mostly making fun of his first attempt just moments prior.

Reportedly, the students were upset that Buress was censored and treated in that manner.

READ MORE: Shut It Down- Aretha Franklin is back on bed rest

“[Loyola] said he couldn’t talk about race in his show, which seems highly restrictive, especially for a man who is known to incorporate his Black identity into his performances,” said 20-year-old student, Rachel Martin. “So, although I can see where Loyola is coming from, I think the situation could’ve been handled a lot better.”

Do you agree that Buress should have been given the opportunity to continue his act as intended or should he have abided by the college’s rules?