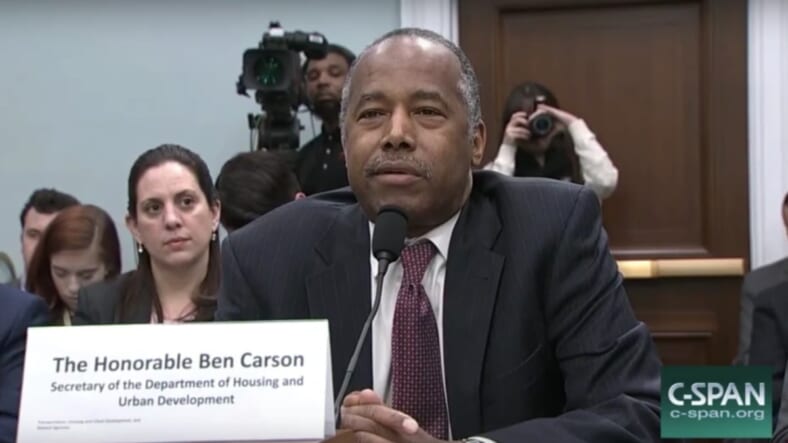 Ben Carson may have some explaining to do when he gets home tonight.

The Housing and Urban Development Secretary has been under fire for his new dining set with a $31,000 price tag.

His response? Blame it on his wife.

READ MORE: Ben Carson softly condemns Trump’s ‘sh*thole’ remarks during MLK speech: ‘I don’t agree with the president about everything’

Tuesday, Carson claimed during a Congressional hearing that it was his wife who chose the now infamous dining set.

“Ben Carson on that $31,000 dining set: ‘I left it with my wife…the next thing I …heard …was this $31,000 thousand dollar table had been bought,'” CBS reporter Katie Watson tweeted.

The former presidential hopeful claims he has no idea about the final price tag until it became an issue in the news.

“I was told the dining room set needed to be changed. I said, “Why?” “Because people are being stuck by nails, a chair collapsed with somebody sitting in it, it’s 50 years old.” I said, “OK, we can potentially do that.”

I asked my wife, also, to help me with that. They showed us some catalogues. The prices were beyond what I wanted to pay. I made it clear that that just didn’t seem right to me. And I left it with my wife, I said, “help choose something,” but I said, “the money that is gonna be used, we need to take care of the deputy secretary’s office, and whatever is left over, take care of the dining room furniture.”

It was very important to do that, and I realized that, but I had so many other things to do at that point. I had no assistant secretaries, I had no deputy secretary, I was running from place to place dealing with a lot of important issues so I really wasn’t concerned about furniture.

The next thing that I, quite frankly, heard about it, was that this $31,000 table had been bought. I said, “What the heck is that all about?” I investigated, I immediately had it canceled. Not that we don’t need the furniture, but I thought that that was excessive.”

READ MORE: 14 Ben Carson quotes that will make you cringe in agony

This explanation makes it seem like Carson is being blamed for something he took no part in. HUD also made a similar statements, essentially saying Ms. Carson is the one who took part in the selection process.

Despite the united front that’s being presented, according to CNN emails dating back to August show both he and his wife chose the table.

While some may find it silly to split hairs over furniture costs, the timing of this controversy is especially awkward because HUD is currently seeing major budget cuts, leading others to question why such an expensive purchase would even be allowed in the first place.