FBI: Bomb explosion at Texas FedEx plant could be linked to Austin attacks 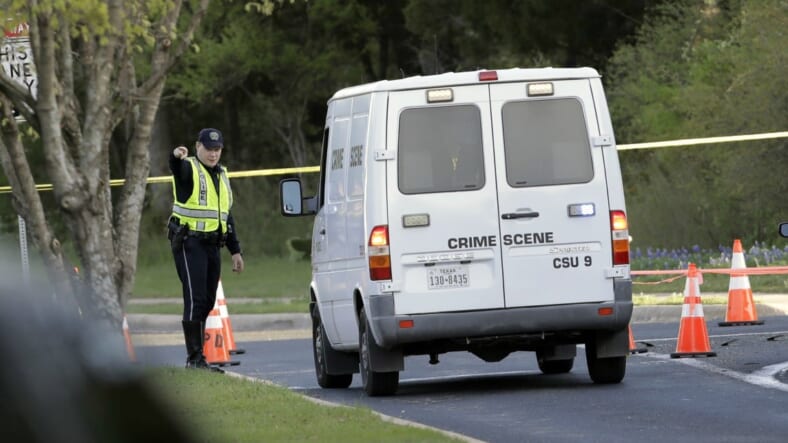 A police crime scene van arrives near the site of Sunday's explosion, Monday, March 19, 2018, in Austin, Texas. Police warned nearby residents to remain indoors overnight as investigators looked for possible links to other deadly package bombings elsewhere in the city this month. (AP Photo/Eric Gay)

Investigators are swarming a FedEx facility outside San Antonio, Texas, this morning trying desperately to determine whether it is connected to four other explosions in Austin this month.

According to CNN, the most recent blast detonated inside a FedEx facility in Schertz, Texas, FBI San Antonio spokeswoman Michelle Lee said. The Schertz facility is located in a San Antonio suburb that is approximately an hour’s drive southwest of Austin.

One FedEx team member reportedly suffered minor injuries when a “single package exploded” at the ground sorting facility, company spokesman Jim McCluskey said in a statement.
–Kim Kardashian pimps Black culture and fails Black women with new beauty line–
Based on preliminary information gathered at the scene, Lee said there could be a connection with the four Austin explosions, which killed two people and injured four others.
“We suspect it is related to our investigation,” Lee said.

In the latest bomb attack in Austin over the weekend, reports suggest two men were either walking or riding their bikes down a sidewalk when a bomb was triggered around 8:32pm in southwest Austin Sunday night.

Thankfully the injuries are reportedly not life-threatening.

Anthony Stephan House, the first victim, was reportedly a family man and loving father to an eight-year-old daughter before his life was tragically cut short by a package bomb.

Esperanza Herrera, a 75-year-old Hispanic woman suffered potentially fatal injuries and was rushed to the hospital.

—Walking out for Safety: After being shot at for refusing a man’s advances this teen is fighting for change—

Police identified Draylen Mason as the 17-year-old that was killed in a second attack.

According to The Daily Mail, Draylen Mason was an aspiring musician. His grandfather Norman Mason was a renowned dentist with strong community ties. Mason’s grandmother LaVonne Mason broke ground as the co-founder of the Austin chapter of the National Urban League.

The Violin Channel reports that Draylen Mason was an honor roll bass student at the East Austin College Prep, where he studied with William Bill Dick. Mason was also a member of the Interlochen Center for the Arts, the Austin Youth Orchestra and the Austin Soundwaves.

Are communities of color being targeted?

With the fourth bombing, residents of color are concerned that they are being targeted, yet officials remain reluctant to call these attacks hate crimes.

Austin police chief Brian Manley believes the incidents are linked to the prior bombing attacks which killed two people.

“It is very possible that this device was activated by someone either handling, kicking or coming in contact with a tripwire that activated the device,” said Chief Manly during a Monday morning press conference.

“We are working under the belief that they are connected to the previous bombings.”

According to the New York Times, investigators from the F.B.I. and the Bureau of Alcohol, Tobacco, Firearms and Explosives responded to the neighborhood known as Travis Country, which is in a different area from the three previous explosions.

“We cannot rule out hate, but we’re not saying it’s hate,” Chief Manley said last week according to CNN.

“This moment cannot be something that divides us,” said Travis County Democratic Party Chairman Vincent Harding. “This cannot be a white issue or Black issue or an east issue or west issue. This must be a human issue, this must an Austin issue for all of us.”