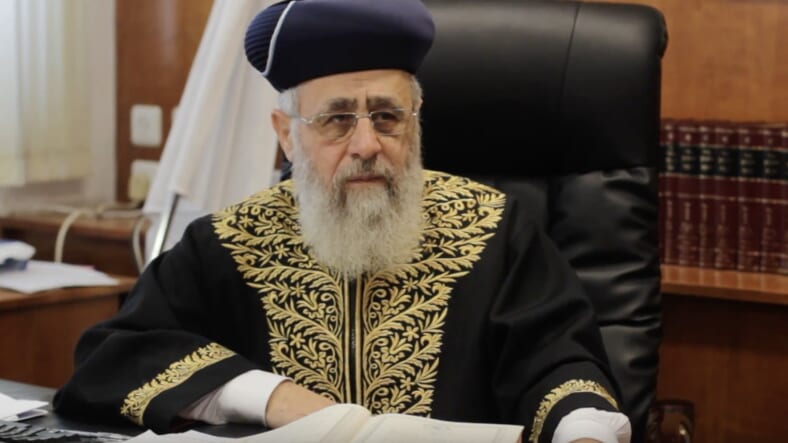 A Sephardic chief rabbi of Israel is being heavily questioned today after it was reported that he referred to Black people as “monkeys” in his sermon last Saturday.

According to Time Of Israel, Rabbi Yitzhak Yosef was addressing a Jewish legal issue about whether or not the members of his synagogue should bless more than one tree during the Hebrew month of Nissan.

Giving a hypothetical to explain his remarks, he detailed an “unusual creature” he encountered, depicting the imagery of a Black child with two white-appearing parents.

According to the video footage provided by Ynet, the rabbi used the word “kushi” which has negative connotations and additionally used the word “monkey” to also further describe the Black person in his story.

His office reportedly told Ynet that the comparison was taken from the religious text of the Talmud, intimating that the rabbi gets a pass since his reference is from an ancient text.

Yosef is well-known amongst the most senior rabbis in Orthodox Judaism and so it seems is his penchant for such remarks.

In May 2017, he insinuated in another sermon that secular women behave similar to animals, citing the way they dress as one example. That same week, he also reportedly told Israeli soldiers that if they should find themselves in front of women singing and dancing—what he called a “deliberate display of provocation”—they should remove their glasses, look away, or read a book instead.

In May 2016, Yosef went so far that he was forced to retract a comment from a weekly sermon. That time, he publicly stated that non-Jews should not be allowed to live in Israel. In defense, Yosef asserted that he was only speaking theoretically, but he then reiterated his belief that non-Jews living in Israel should spend their lives serving Jews.

One should note that the Sephardic Jews trace their origins to the Iberian Peninsula, North Africa and the Middle East, according to Newsweek.

The Anti-Defamation League is lashing out at one of Israel’s chief rabbis for comparing black people to monkeys.

Yosef, who represents Israel’s Sephardic Jews of Middle Eastern and North African descent, made the comment during his weekly sermon. His office said he was citing a passage from the Talmud when he used a derogatory term for a black person and then interchanged it with monkey.