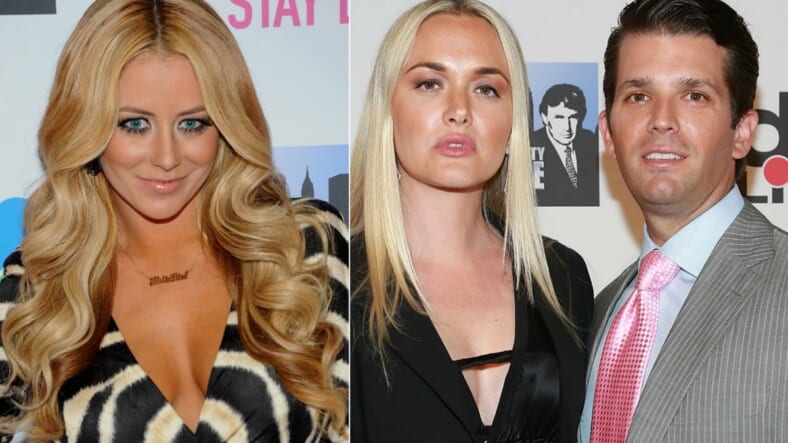 Diddy’s protégé Aubrey O’Day is reportedly admitting that she had a tryst with Donald Trump Jr.

According to Complex, Aubrey has admitted to having an affair with Trump which started after filming Celebrity Apprentice, where she served a contestant. O’Day has reportedly said the affair lasted for months and she claims that she thought Trump’s marriage was over.

Don Jr. and his wife Vanessa file for divorce after 12 years of marriage and released a joint statement saying:

“After 12 years of marriage, we have decided to go our separate ways. We will always have tremendous respect for each other and our families. We have five beautiful children together and they remain our top priority,” the statement continued.

But O’Day’s telling friends she’s not to blame.

The ex Danity Kane group member said her relationship with the Don started back in 2011and his wife found out about in in 2012. O’Day does admit that Vanessa found “sexy texts” between Don Jr and her on his phone but reportedly has told friends that she doesn’t believe the affair is having an effect some six years later.

Sources say O’Day is “devasted” that she’s being called a homewrecker and she reportedly doesn’t have plans to sell her juicy side f the story.

Getting Out of Dodge

Vanessa Trump has hired a notable New York-based criminal defense attorney to handle her divorce to Donald Trump Jr., a choice that has many left many wondering why she’s hired a high-powered attorney who specializes in crime cases.

According to Mediaite, David Feureisen, will represent Vanessa who revealed this week that after 12 years she and Don Jr. would amicably divorce in a joint statement.

“After 12 years of marriage, we have decided to go our separate ways. We will always have tremendous respect for each other and our families. We have five beautiful children together and they remain our top priority,” the statement continued.

But Manhattan family law expert Bonnie Rabin told Page Six that choosing Feureisen as an attorney is a “curious choice if it’s an amicable separation. If it’s an amicable situation, you wouldn’t be highlighting the criminal aspect.”

The Trump family is under fire and Special counsel Robert Mueller recently subpoenaed the Trump Family business, which Don Jr. is in charge of – in an on-going investigation into President Trump’s ties to Russia.

Vanessa Trump was taken to the hospital after opening a letter that contained an unknown white powder.

Vanessa opened a package, which had been sent to Trump Jr.’s Manhattan apartment. When firefighters and police arrived along with emergency medical responders, Vanessa Trump and two other people were decontaminated and then took them to the New York-Presbyterian Weill Cornell Medical Center as a precaution.

“The substance was deemed to be non-hazardous and is being transported to a lab in New York City for further analysis,” said NYPD spokesman J. Peter Donald, according to ABC News.

The NYPD also stated that the Secret Service would be part of the investigation into the matter.

Reports say that Vanessa has upset and feeling uneasy about the situation ever since.