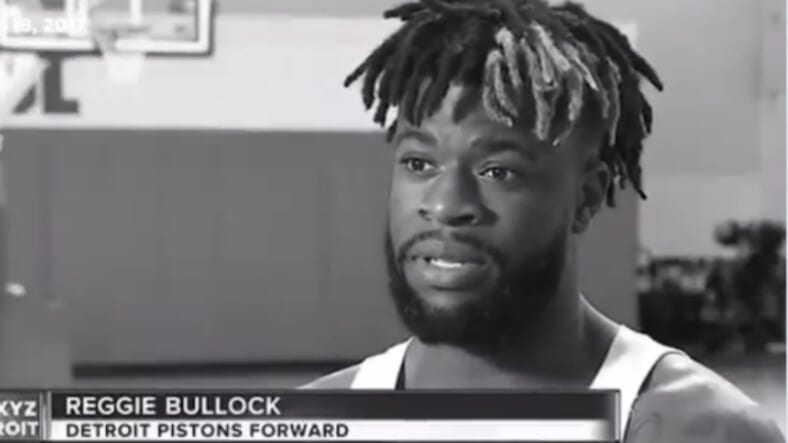 Detroit Piston Reggie Bullock says one of his biggest regrets is that his transgender sister never got to see him play in college.

In an emotional video posted on the Pistons’ Twitter account, Bullock admitted that he was once ashamed of his sister and didn’t want her to come to his games.

“I always thought about what my teammates would think or what people would think,” Reggie Bullock admitted. “That was probably one of the stupidest things, but I just didn’t know so much about [being transgender], and I wasn’t as comfortable with it.”

Unfortunately, his sister, Mia Henderson was murdered in 2014 and it was that tragedy that opened Bullock’s eyes to the struggles of the LGBTQ community.

Following the death of @ReggieBullock35‘s transgender sister Mia Henderson, he has pledged to take a stand for Transgender awareness and acceptance. He met with representatives of @GLAAD & @AthleteAlly & hosted a Pride Night to show his support for the LGBTQ community. pic.twitter.com/cOOsFbuYtl

“It was something I didn’t know too much about [when Henderson was murdered] — about the deaths and the things that happen to this community,” Bullock said.

Bullock learned more about what his sister faced, including the heightened risk of violence and discrimination for transgender women of color.

“The impact she had on my life and the happiness that she had with just being herself always stuck with me,” he said of his desire to raise awareness in his sister’s name, according to Upworthy. “Even when she left.”

But Bullock wants to do more. The Pistons recently hosted a Pride Night in Detroit and teamed up with LGBTQ rights group GLAAD and Athlete Ally to use his face and name to spread the message of love, even if he’s still learning how to be an ally himself.

“Anything that y’all can put my face on or use me for—parades or stuff like that — I’m willing to do it,” Bullock said in the video.