The comedian, morning radio show and "Family Feud" host and his wife managed to offend people with a social media post that used a word largely seen as an outdated perjorative 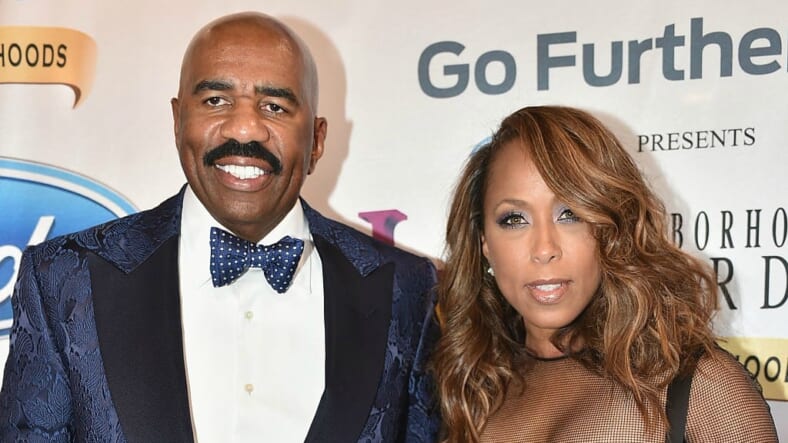 There are plenty of things that used to be acceptable to say publicly that are no longer cool in 2018. Times change as do attitudes. When you say something offensive, it doesn’t matter if you find it offensive. Just apologize and move on.

But Steve Harvey and his wife, Marjorie, apparently did not get the memo.

Earlier this week, Marjorie Harvey posted a video on Instagram of her and Steve slicing up fruits and veggies while making juice in their kitchen. Seems safe enough. However, in the clip, Marjorie uses the outdated pejorative often used to describe people with intellectual and mental disabilities.

READ MORE: Steve Harvey admits he had his daughter’s fiancé followed when they started dating

“I’m sitting here arguing with my husband, because clearly he thinks I’m r—–ed [and] I don’t know how to cut a beet,” she says.

The video sparked outrage among social media users, who – according to People Magazine — flooded the post with over 3,000 comments.

“As somebody who works with adults with Developmental Disorders and a loving sister of a beautiful woman with Down Syndrome, I can assure you that when the word r—ed is used in a derogatory manner it is EXTREMELY offensive,” wrote one user. “People need to educate themselves.”

Wrote another, “It wasn’t until I had my third daughter who has Down Syndrome that I realized how offensive the R word can be. As a mother to a child with special needs hearing this word is truly heartbreaking and makes my stomach turn.”

READ MORE: Riley Cooper, a lesson in both prejudice and forgiveness

It was at this point that Steve, the longtime host of the Family Feud, Showtime at the Apollo, and his own radio and TV talk shows, jumped in to defend his wife and only made a bad situation worse.

“What you trippin bout cause my wife said the word r—-ed… it’s a word ain’t it?” he commented on the post. It only got worse.

“And she ain’t talking bout nobody but herself to me … What she was doing was just that and she ain’t saying it bout (nobody’s) baby… I don’t ever comment but [damn] is you just looking for something to be pissed off about cause we ain’t… and I wrote it r—-ed. NAH!!”

His response sparked an even bigger backlash, with one user saying Steve was “doubling down in defense of hate speech,” before mockingly calling him “a civil rights icon.”

Another more measured user commented: “I think it would speak VOLUMES if you would admit that it wasn’t the right word to use even in a playful unrelated scenario and going forward you will find other words to use as this word is extremely offensive.”

What do you think of Steve Harvey and his wife seeming to make light of this whole thing? Comment below.