Kenya Moore goes in on Kim Zolciak-Biermann and Michael Rappaport

Moore has some choice words for her 'RHOA' costars. 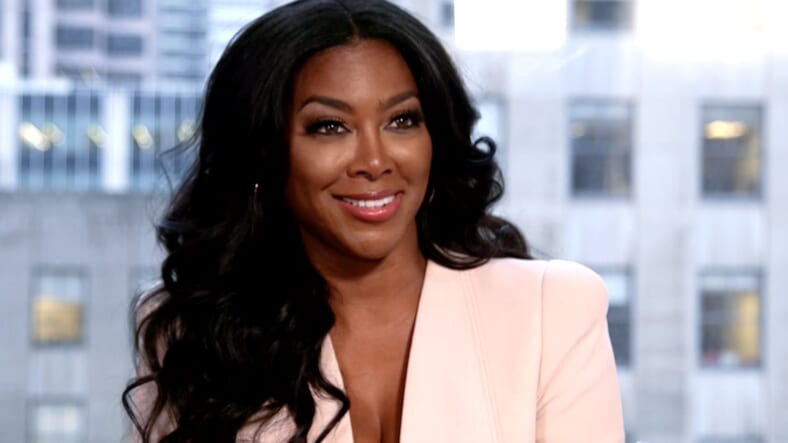 Kenya Moore’s ex has trouble with the law.

When it comes to throwing shade, Kenya Moore reigns supreme.

The Real Housewives of Atlanta star who is expecting her first child with husband, Marc Daly, served up some serious clouds for her costars during part one of the this season’s reunion last week she spoke to TheGrio exclusively about all the drama that’s yet to come.

“We sit there for 16 hours and we don’t know what made the cut. I can say that the relationship between Nene [Leakes] and Kim [Zolciak-Biermann] does not look like it will ever be repaired. There is a lot of history between those two and Kim has been a vile, nasty person toward Nene. I finally get to have my say with Kim too. She did it to herself. She came after all of us and she couldn’t handle the heat she was getting and that’s why she tried to play the victim at the end even though she’s the only who victimized people the whole time,” she said.

“Kim is not a good person. I don’t say that often but I believe she’s not a good human being. There’s something really wrong with her. Sweetheart, what about your children?What about how you’re raising your children? What about the type of wife you are? What about the representation your husband is seeing on TV and how you treat other people and the lies you put out about people who are supposed to be your friends? I’m just disgusted by her and I never thought she would be that awful as a person. A lot of people question [if she has a drinking problem]. She has said Kroy is always with her because she likes to drink. That one is a lost cause.”

EXCLUSIVE: Kenya Moore on baby news and why Sheree Whitfield’s fired from ‘RHOA’

According to Kenya Moore, viewers didn’t even get to see some of Biermann’s most offensive moments.

“What you guys saw on TV is only a tenth of the bad things she has done to me. I never understood why she came for me so hard this season. She talked about cellulite on my legs and a whole bunch of things that didn’t make the show. You can’t see everything. Clearly this woman is acting a fool for no reason. She’s attacking people left and right. It’s crazy to me,” she continued.

“It’s no secret that I have been a polarizing person and I think people love to not take my side on issues even when I’m right and so it made me feel good that the other girls realized how foul Kim is. You can see what the truth is.”

She also revealed how she comes up with comebacks for her costars so quickly.

“I think it is just because I’m quick-witted, but there is truth in those words to me. I read people with facts. People will go to the depths of hell to say something untrue about me and it’s the most unbelievable thing. They sit there and say whatever they want. I will only say something I know to be a fact. I’m not trying to tear anyone down,” she explained.

“They always hit me with something personal first. Marlo said something about my skin and my yellow dress. Now we’re gonna go there because there’s no reason for you to personally insult me. If you have problem with me, I’m OK with your opinion but if you hit me with a direct insult, you open the door for other stuff to come your way. Let me tell you about your character. I have facts I have never repeated about most of the girls because I don’t hit below the belt and I think certain things are off limits for TV and I have a line that I don’t cross.”

The 47-year-old reality star also weighed in on her recent dust-up with Michael Rappaport on Watch What Happens Live, where he dissed her for having ashy feet and compared her to a gorilla, prompting fans to leap to her defense and accuse the washed-up actor of being racist.

“Even with Michael Rappaport, I was like, ‘Do you really think you’re gonna come here and try to read me with these tired lines? Do you not know who I am?’ It was shameful. He should be really ashamed of himself for posting that photo of me and a gorilla. He was trying to say that the after effect of getting my make up done was me looking like a gorilla,” she said.

“I’m divided on whether or not that shade had racist roots. I don’t know if you can call it racially tinged because he has been a fan of the show for so long and he saw when someone on the show called me ashy and some people think they’re cool with the Black community and they think it’s safe to say things like that. He would be the same type of person who would say the n-word and think it’s OK as a white man in a conversation with black people. I think the “gorilla” comment was racially tinged. He’s a fool grasping at his last straw. He got too comfortable. As a man, you should know there’s a boundary you don’t cross with a woman like me. I’m not gonna sit there and take your bullshit. I’m gonna let you know. He was extremely out of line and I’m glad people took up for me in that instance.”