Activists say the statue should be destroyed, not just moved. 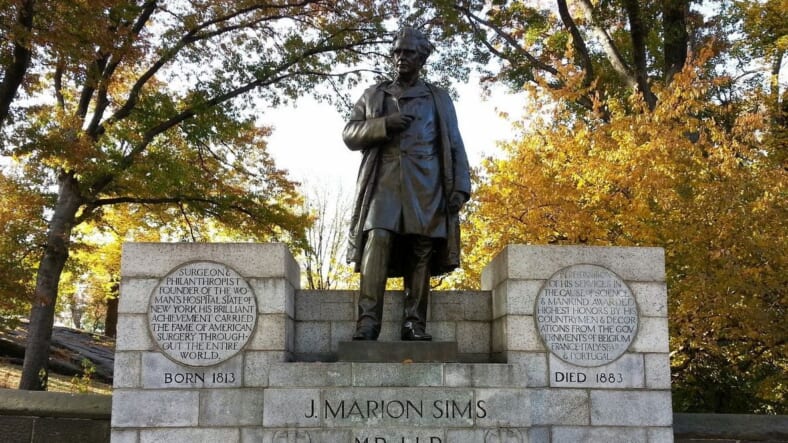 The City of New York removed a statue of J. Marion Sims, the “father of modern gynecology,” from its Central Park location in East Harlem. Sims, though credited with numerous advancements in gynecology, did so at the expense of enslaved Black women.

In the mid-1850s, when gynecology was still a fledgling field of medicine, Sims experimented on correcting at-the-time common issues like fistulas by performing painful surgeries on enslaved Black women without anesthesia.

At least a dozen enslaved women were subjected to Sims’ experiments. Most of their names are not known, but he recorded the names of three of them–Anarcha, Betsy and Lucy. Sims sometimes performed his experiments with an audience of other white, male doctors in attendance.

Sims’ statue is leaving Central Park, but it will be re-erected elsewhere in New York City. This time, it will be placed in Brooklyn’s Green-Wood Cemetery, where Sims is buried.

The fact that Sims’ statues is merely being moved instead of destroyed does not sit well with some activists.

At a Design Committee meeting about the statue, the New Times reports that people spoke passionately about the issue.

“The relocation of the Sims monument to Green-Wood Cemetery in Brooklyn by the City of New York denotes that this physical representation of anti-black violence will still stand and maintain its presence in the heart of yet another community of color,” said Amrit Trewn, an activist. Trewn advocated for demolishing the statue.

Former Design Commission member Michele Bogart had a different opinion. She reminded attendees of the meeting that Sims’ work has to be put in context of that time period as she urged for the statue to stay put. “History matters. Don’t run from it,” she said.

City officials say they will consult with local members of the East Harlem community to determine what to put in the place of Sims’ statue. Some have already suggested an homage to Anarcha, Betsy and Lucy, and the other unnamed women whose bodies were sacrificed for J. Marion Sims’ experiments.

Removing Sims’ statue was part of a larger discussion started by Mayor Bill de Blasio after last year’s Charlottesville riot and the ensuing conversation about Confederate monuments. De Blasio ordered a review of “symbols of hate” around the city and an action plan to remove those symbols once consensus was reached.

Numerous statues and monuments were considered, including the Christopher Columbus statue at Columbus Circle and the Theodore Roosevelt statue in front of the Natural History Museum. The Sims statue was the only monument moved.

The J. Marion Sims statue was originally erected in the 1890’s in Bryant Park, but was placed at the Central Park location in 1934.