This incident occurred in the LA area. 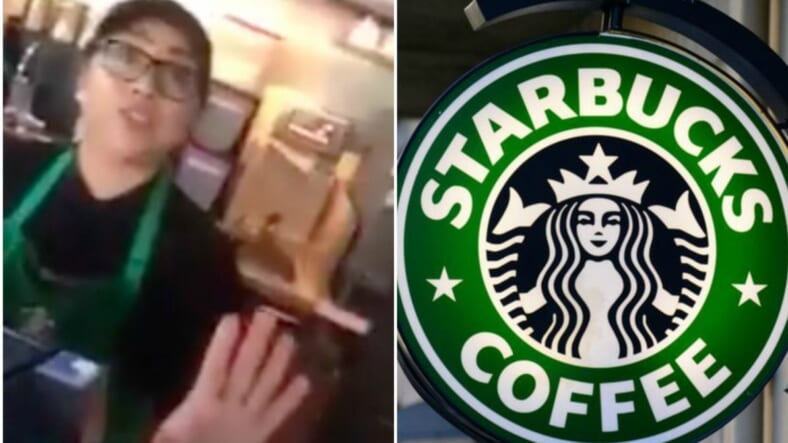 A new video has been making the rounds on social media showing a Starbucks manager alerting authorities to get a Black man removed from a Los Angeles area store. Before the video began, the man was allegedly denied the bathroom code and was told that it was because he had not yet made a purchase.

The man filming saw a white man leave the restroom and asked if he had made a purchase. The white man (who identified himself as Weston) said he had not yet, but he planned to. The Black man filming the incident then questions the Starbucks employees about why he was denied the bathroom code because of a lack of a purchase, but the white man who also had not bought anything was allowed access to the restroom.

Meet Brandon Ward. He was @Starbucks – about to make a purchase – and needed to use the restroom.

They denied him the code.

He then finds a white man, Weston, who came out of the restroom.

He had not made a purchase but they gave HIM the code.

The woman behind the register informed the man that she was the store manager. She denied that she had given the white man the code and she told the young man to leave the store because it is a “private business.”

This is a private business and you need to stop recording,” she said. “I am the store manager and I am asking you to leave right now. You’re not allowed to be in here anymore. You need to leave.”

The self-identified store manager then walks from out out of the camera’s view. The young man filming said “I’m not allowed to be in here anymore? Why they so upset with me, Weston? What did I do? I just tried to use the bathroom like you did. Is it my skin color?”

In the last few seconds of the video, a uniformed man is seen appearing to try to usher the young man out of the store. It is not clear if that person was a police officer or a security guard.

According to ABC7, the confrontation occurred in January.

Ward said he posted the incident online in January, but it didn’t get any traction until the Philadelphia Starbucks incident, where two black men were arrested.

An arrest in Philadelphia

This Los Angeles area incident comes on the heels of a viral video filmed at a Philadelphia Starbucks put the company in defense mode. The CEO of Starbucks Kevin Johnson is on the ground in the City of Brotherly Love after two black men were shown no love and locked up by Philadelphia police for simply sitting in the coffeehouse while waiting for a friend.

A viral video that shows the unnamed men being handcuffed and ushered out of Starbucks started a firestorm on social media, with many questioning why an employee called the cops on the men for doing something so many white people do daily.

CEO Kevin Johnson appeared on Good Morning America today and did not mince words about what happened. He issued a straight-forward apology.

The manager of the Philadelphia location has reportedly left the company in a “mutual” decision according to a company spokesperson.